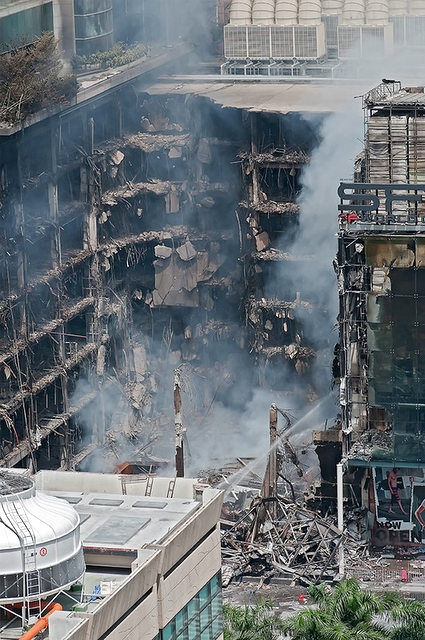 What words can best describe the events in Thailand during May. Heartbreaking, tragic, ruinous and cataclysmic are just a few which sum up the death and destruction in Bangkok that finally severed Thailand into two separate halves. Let’s hope the political surgeons can stitch them back together. Enough said. Let’s get straight into my pick of the best Thai posts during May.

Catherine Wentworth and Bernd Mechsner set alight Women Learning Thai…and some men too with Bernd’s latest update from life living in the shadows of Ratchaprasong. Update 2 : Expat’s Eye-witness Report : Ratchaprasong has an excellent account and stunning photos (picture right) of the day when the red shirt leaders surrendered and Bangkok started to burn. Did I mention stunning photos….they really are.

If you are heading to or currently staying in Thailand’s capital and you feel the need to forget the country’s current political dilemma then check out Thailand Musings post Club Culture Bangkok. Next month Club Culture open a new four storey nightclub in Bangkok near to the capital’s Democracy Monument on Ratchadamnoen Road. Each floor of the club will have room to accommodate 500 people and each level will also have a different theme. I wonder what music will be playing on the top floor, the Beatles ‘Yellow Submarine’ or Simply Red’s ‘Maybe Someday.’ Check it out.

Michelle author of Brit in Bangkok left her readers will no doubts about which camp her hopes were with in last month’s Bangkok conflict. Thai Government Shooting Civilians? echoes her thoughts and includes some disturbing photographs from Ratchaprasong.

This month’s blog review is struggling to work its way out of Bangkok and Siam Rick doesn’t help matters with Cheap to live in Bangkok? Not so much. If you live outside of Thailand and have wondered how your local prices compare to those in the  Land of Smiles, Behind the Noodle Curtain may have the answer. Rick compares a range of products and services in his home city Toronto to those in Thailand’s Big Mango (Bangkok). This one’s a handy guide for those of you considering a trip to Thailand in the near future.

May is the time of the year when many Thai men have their heads and eyebrows shaved off, take vows and temporarily commit themselves to life as a Buddhist monk. Jonny Foreigner and Monk ordination ceremony in Saraburi finally get us on the road and out of Bangkok. Ordaining as a monk in Thailand is something men are expected to do at some stage of their life and it is seen as a great honour for their family. Jon has a stack of quality photographs with this one as well as some well written words. Now lets try and stay out of the Big Mango.

Ubon Ratchatani is next and a post which is not for the squeamish. BBQ chicken Thai Style ( Gai Yung/Gai Ping ) is a harmless enough title but some of the photos may ruffle your feathers. Life in rural Thailand takes a couple of live tough country chooks (chickens) and serves them up BBQ style. Their blood is even kept to make another dish. Blog author MeMock captures the whole process in photographic stills. For some readers this one may be a little too detailed. 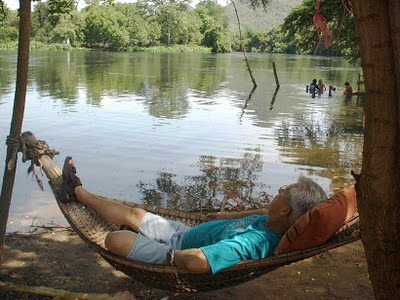 Next we’re off to the north east of Thailand to join up with John who has a few tips on building your own home in Thailand. John has written a good post with lots of great advice on location, building materials and essential things that people tend to forget. John reminds us on making sure your desired plot of land is in a flood free area, as well as checking out there’s no major industrial builds about to take place next door. Grab your work bag, sandwich box and get over to expat Udon Thani and expat build your own home Thailand.

If you’ve never fell out of a hammock then there’s every chance you’ve never been in one. Hammocking…(The art of) from Malcolm and Ciejay’s Kanchanaburi blog Retired in Thailand and Loving It casts an expert eye over getting the best out of your hammock (picture left) and avoiding the bumps and bruises which come with learning this skilled art. As always Malcolm provides plenty of smashing pictures.

Thai Life in Phana places William Shakespeare’s Sonnet 130 and buffaloes into the same post in Falling in love again in Thailand. It seems an impossible match but Lawrence pulls it off with his usual charm and with a claim to being the first Thai blog to include a complete work by William Shakespeare. All’s Well That Ends Well and this one accomplishes just that.

If you love a story with a happy ending then check out My Jungle Life and Golf is off to university. Golf is a young Thai teenager who came into the life of Jungle Jill four years ago on their island in Southern Thailand. Golf is described as a bright and tenacious character from a poor family background, but she is finally off to university after generous backing from kind souls who have helped with her tuition fees. Mark this one with a big tick.

If you are ever on Koh Samui island and your hunger pangs are starting to bite, checking out Camille’s Samui Info blog might just put you right. Camille has lived on Koh Samui since 1999 and knows the very best places to wine and dine on the island. Lebanon Station, Lebanese restaurant in Chaweng is another recommended eatery on Camille’s growing list. Here’s Camille’s own words “It’s a very small place, almost a hole in the wall kinda place but if you’re in to Middle eastern food, you will find what you want right here.”…..Sounds delicious. 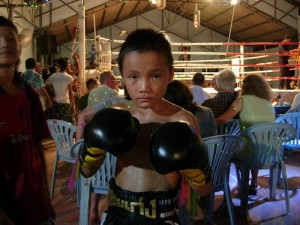 Ben from The Thai Pirate finds himself in a Hua Hin hotel and out of beer. Ben heads out into the evening delights of Thailand’s popular coastal resort and stumbles upon a Muay Thai Fight Night. Muay Thai Youngsters has its main focus on a bout between two Thai schoolboys in a sport which is described as being as disciplined as it is tough. Another knockout post from boozy Ben (joking).

My Thai Friend hit the road in May on a four day trip which took in a visit to Amphawa floating market, a monks ordination in Samut Sakhon and a ride up a mountain on a rack railway. Unseen Thailand Road Trip covers parts of Thailand unspoilt by the popular tourist trail and is a good insight into Thai life beyond the beaches. Crazy Thai music and whiskey galore are part of a monks ordination before the more serious stuff begins. Mike is given the honour as one of only five lay people chosen to witness the ceremony. This one’s a good read from a man who was recently described as a Thai blogging legend.

We go from one Thai blogging legend to another and a post from Talen author of Thailand, Land of Smiles. Talen writes an excellent regular weekly round up of all things Thai and in his last May report, he covered the Thai government’s charges of terrorism against its former prime minister Thaksin Shinawatra, a Brit who is in big, big trouble in Thailand and a lovely story about Linping the panda who celebrated her first birthday on May 27th at Chiang Mai Zoo. If you’ve not read Talen’s weekly review before then make Thailand in the News Week Ending 05/29/10 your first view of what I’m sure will become a regular read for yourself.

Finally before signing off this month’s Thai bog review I’d like to offer my congratulations to Catherine Wentworth and Women Learning Thai..and some men too on being chosen as Thailand Voice’s Blog of the Month for May. Catherine, well done and well deserved.

That’s it until next month. Happy reading.