Thailand really is a land of surprises. It is a country full of warm, friendly smiling people and a land where the culture, scenery and relaxed way of life has a habit of bringing its visitors back for more.

I have been treading the Thailand trail for over 11 years and each and every visit brings something to either take my breath away or at least make me stand back in admiration. 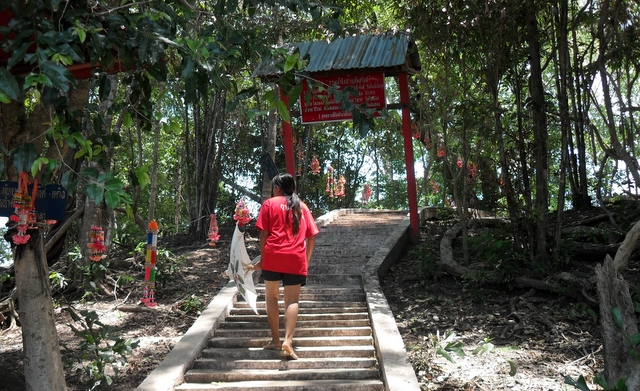 My Thai language skills are poor considering the amount of time I’ve spent in the Land of Smiles. I rely upon phonetic spelling rather than Thai script for my efforts to learn more of the language. Norn Poo roughly translates to Grandfather’s (poo) Mountain but Norn is in reality a small type of hill. Perhaps Catherine orHugh can help me on that one with a proper word description and more accurate phonetic spelling. Khao is Thai for mountain but norn is a word I haven’t managed to nail down. Norn Poo is a place I’ll visit again…and again. I kind of felt at peace there.

I spend a large part of my Thailand holidays staying at a village in a poor rural area of Udon Thani Province. My girlfriend Wonderful Wi and myself have a house there. The village is a place I enjoy being in but recreationally there is very little to do. A vivid imagination is a must to fill the quieter days and fortunately mine is a very vivid one to say the least. There are however many places and sights around Thailand’s small villages that you never get to hear or enquire about due to a lack of personal language skills. Sometimes you have to trip straight over them.

Last month (May) all around Northeast Thailand local communities were celebrating the Bang Fai Rocket Festival. There was no set date but the course of May held many different festival days around our village region. I wanted to see the Bang Fai Festival and one morning enquired to Wilai about my wish. As luck would have it there was a festival event taking place at the foot of Norn Poo that very day. I’d never heard of Norn Poo before and yet it was only three kilometres from our village house.

Here’s an extract from Wikipedia explaining the Bang Fai Festival

A Rocket Festival is a merit-making ceremony traditionally practiced throughout much of northeast Thailand and Laos, by numerous villages and municipalities near the beginning of the rainy season. Celebrations typically include preliminary music and dance performances, competitive processions of floats, dancers and musicians on the second day, and culminating on the third day in competitive firings of home-made rockets. Local participants and sponsors use the occasion to enhance their social prestige, as is customary in traditional Buddhist folk festivals throughout Southeast Asia….

In a word or two, the rockets are fired into the sky to please the rain gods in the belief they will bring rain to nourish the rice fields.

We arrived mid morning at the local Bang Fai Festival and already rockets were being fired high into the clear blue skies, watched by a very large and appreciative crowd. We stayed for about one hour and then decided to leave as the gap between each rocket launch was quite long and the sun was starting to beat fiercely.

Below is a few pictures I took but getting a shot of the launched rockets was near impossible, it was for me anyhow (see above right for my best effort). Click on the photos below to enlarge.

I was pleased I had seen the rocket festival in full swing, and happy with that we decided to leave. We walked along a dirt track with a slight incline back towards our car and Wilai kept walking, straight past it. She weaved through a large crowd and I followed suit. When I emerged through the throng of festival goers I saw a set of stone steps leading up a hill with Wilai (top photo) already on her ascent.

Where the hell is this leading to I wondered as I started my climb to the top. There was only about 60 or 70 steps but it was one of those days when the sun’s heat was unforgiving and by the time I reached the high ground I was kicking up quite a sweat. The view at the summit was stunning. Norn Poo shrine lay before me. 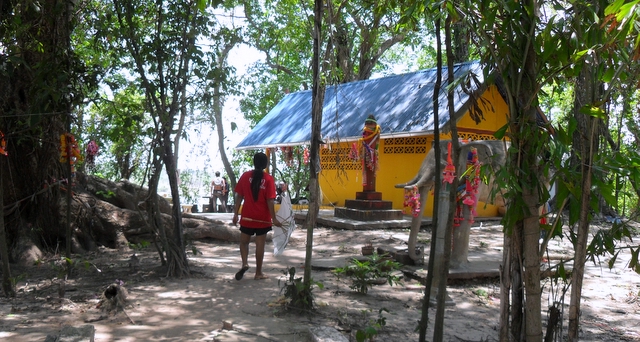 Thailand has much more beautiful shrines than the one on Grandfather’s Mountain, but to discover this just a few kilometres from your home made it all the more special. The view on the other side was spectacular and my photo (below left) does it no justice at all. 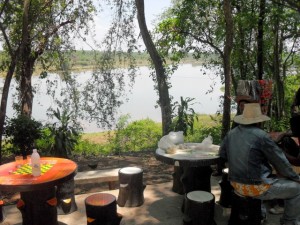 There was a small seated picnic area which looked down onto the Wang Chang River and the view was impressive. The river runs past Wilai’s village (out of shot) and to see it in its glory from above was an eye-catching sight. Wilai and I are going to visit Norn Poo shrine on my next trip to Udon Thani when the idyllic spot will be a lot less busy. It will be the perfect place for an afternoon picnic in a delightfully picturesque location.

Norn Poo has a ghost story attached to it but I don’t have enough detail at this moment in time to write at length about it. The ghost is an old man (grandfather) and I intend researching the story a lot further on my next visit. I think I like ghost stories nearly as much as the Thais themselves. That’s a post for the future.

The shrine itself was a tatty looking affair (it looked like it had been decorated by a Brazilian football fan), but it still had a primitive rustic charm to it which blended in perfectly with everything around. There was also a Buddhist elephant sculpture on the shrine grounds, the elephant is a symbol of physical and mental strength in Buddhism. The bottom photograph shows another small shrine in the raised roots of a large tree (possibly a bodhi tree but I’m no expert on trees). 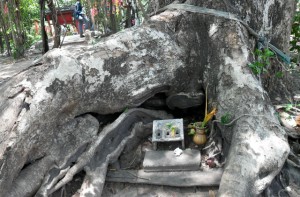 Our morning at the Bang Fai Festival and Norn Poo shrine was one which will stick in my mind for a long time. It just made me think what else is out there that I haven’t seen before. What other surprises does this quiet rural area shelter from prying tourist eyes.

If you throw a stone far enough and go fetch it, you just might find something of interest on your way. I’ll have to throw a few stones in different directions on my next stay in Wilai’s village. Norn Poo shrine is a place I’ll never forget and one I’m going to spend many hours at in the future years ahead. Sometimes heaven is on your own doorstep.