Is the World Cup Vuvuzela Coming to Isaan 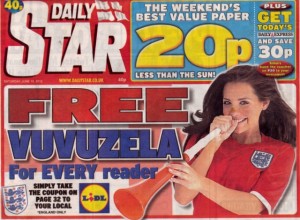 I don’t bloody believe it. Football’s bloody vuvuzela has landed in Britain. Weekends will never ever be the same again. The Daily Star is one of the UK’s best selling newspapers and as you can see from the photo above, they are giving a free World Cup vuvuzela horn to every reader. A large percentage of the tabloid’s working class readers will without doubt take up their offer. I’ve got a strong notion the UK is about to suffer boisterous weekday nights and wild raucous weekends. Thank you South Africa.

I wonder what other far flung parts of the world the bloody vuvuzela might reach. Mmmmm. 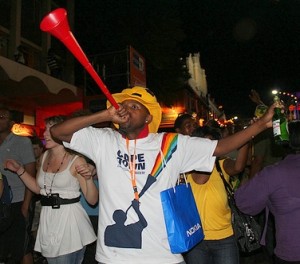 Since football’s World Cup kicked off in South Africa on June 11th I’ve been wondering if Mr T (a former Thai prime minister) has been doing a little business with the bafana bafana boys in Johannesburg. Is football’s vuvuzela coming to Isaan. Red one’s of course.

The bloody vuvuzela (photo by flowcomm) has been likened to the sound of swarming bees, and its noise has also been compared to hundreds of car horns being blasted by infuriated drivers locked bumper to bumper in a traffic jam. I wonder if bees have ever swarmed over a traffic jam. That’s what the vevuzela sounds like to me. It’s goddamn maddening, perhaps they should make TV screens double glazed.

The recent UDD red shirt protests in Bangkok ended on May 19th after the original peaceful rally turned into civil unrest and destruction. Armed soldiers stormed the red shirt camp at Ratchaprasong intersection and now several red shirt leaders are locked up, and waiting trial on possible terrorism charges. Their submission for bail has since been turned down.

The Ratchaprasong protesters armed themselves with red plastic clapping feet in their fight for a more democratic Thailand. Could Mr T be about to equip them with another plastic weapon, as Isaan and their loyal red shirt supporters start to gear up for next year’s possible election campaign.

Thai Prime Minister Abhisit Vejjajiva’s hopes for hanging onto power for himself and his Democrat Party will hinge on running a successful election campaign. Can we expect to hear protesting red vuvuzela horns blaring away in anger at every Democrat campaign venue. Hardly peaceful protests, but they might be effective. Maybe that’s a little too far fetched in my way of thinking, but it did get me speculating as to what other uses the vuvuzela might have in the hands of a farang in Isaan.

Thai ladies do have a thing about sleeping. They can sleep any time and anywhere. The vuvuzela would be the perfect wake up call for a sleepy eyed village girl. Just gently place the vuvuzela bell end (honest that’s the musical expression) over your partner’s ear, and give one long blast on the mouthpiece. You may get a sharp retort but your horn will dampen any profane language muttered.

They say revenge is a sweet thing and with an alarm clock and vuvuzela, revenge can be yours on one of Isaan’s most annoying critters. Set your alarm clock to wake you half an hour before the ‘early bird’ cockerels start crowing. Lean out your bedroom window and rouse the noisy bastards with one mighty blast on your vuvuzela. To me that would be very sweet satisfaction. Do you think a deafened cockerel would crow even louder because I know some hard of hearing folk who talk with thunderous voices. 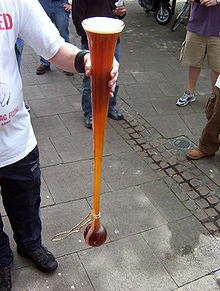 A yard glass (photo left, from Wikipedia) holds 1.4 litres of ale (beer) and is a near identical shape and size to the irritating African horn. You can take a seat in the garden and enjoy a yard of ale by popping a cork into the vuvuzela mouthpiece and filling the trumpet with your favourite Thai beer. After your drink is finished, clean the vuvuzela with a good long blow, which should also signal to your partner you need a refill. Heaven in the garden.

If you’ve ever stayed at a typical Isaan village Thai-stilt house, this one could be ideal for you. Thai toilets aren’t the most inviting of things and those ‘ideal’ homes have their washrooms outside. A visit to the lavatory in the middle of the night is always a last resort action. I may have the answer for those dark bladdered nights. The Vuvuzela Portable Toilet, and it’s very easy to make.

All you need is a watermelon (photo right) and your African horn. The device is assembled by ramming the vuvuzela into the top of the water melon, it’s as simple as that. The working model is then ready for placement by the side of your bed. The Vuvuzela Portable Toilet will ensure you get a good night’s sleep and be a great relief to you as well.

If you are an older ex pat then you should consider making two of these novel appliances. As we get older things tend to fall out, hair and teeth spring to mind. The Vuvuzela Portable Toilet can also be used as a vessel for keeping your dentures safe from harms way while you sleep the night through.

The Vuvuzela’s bell end is a perfect fit for false teeth (there’s a joke in there somewhere). But please do remember which one is for what during the dark shadows of night, because a mix up could lead to dire consequences. Blowing a red horn through yellowed stained teeth, might get the village locals guessing to which political party your loyalties really lie.

The world cup hooter is a resourceful village companion and can also be used to out-bark any soi dog as well as making a perfect ashtray, flower vase, cocktail shaker and giant ice cream cone. If you do have false teeth, poor eyesight and a weak bladder, please don’t eat any ice cream in bed. Beeeeeeeeep.