The Lady Boys of Bangkok

Do Thai ladyboys prefer hard balls or soft ones? Do they like balls which are easy to grip and have extra bounce once the covers come off? After painstaking research, Beyond The Mango Juice has found out the answer. I don’t know what you think I’m referring to, but your perverse sense of humour is way off-line, because I’m actually talking about English cricket.

The Lady Boys of Bangkok are a troupe of sixteen Thai transvestites who have performed a spectacular cabaret show in the United Kingdom since 1998. Their 2010 Fantasy and Feathers UK tour is now in full swing, but last month the guys took a little time out from their gruelling roadshow to play England’s national sport, cricket.

The lady boy performers are probably used to eating crickets in their homeland, but here in the UK they swapped bright lights, music and pencil eyeliner for a cricket bat and shiny red ball when they were given the chance by a village cricket club in Hale, Cheshire, to come on down and have a practice session.

Club batsman Ben Ormsby was on hand to put the Lady Boys of Bangkok through an afternoon of coaching. The Thai team strip was more Las Vegas than Lords, and put Twenty20’s carnival brand of quick-fire one day cricket to shame. Not to mention, cricket’s famous LBW became Ladyboy Before Wicket. 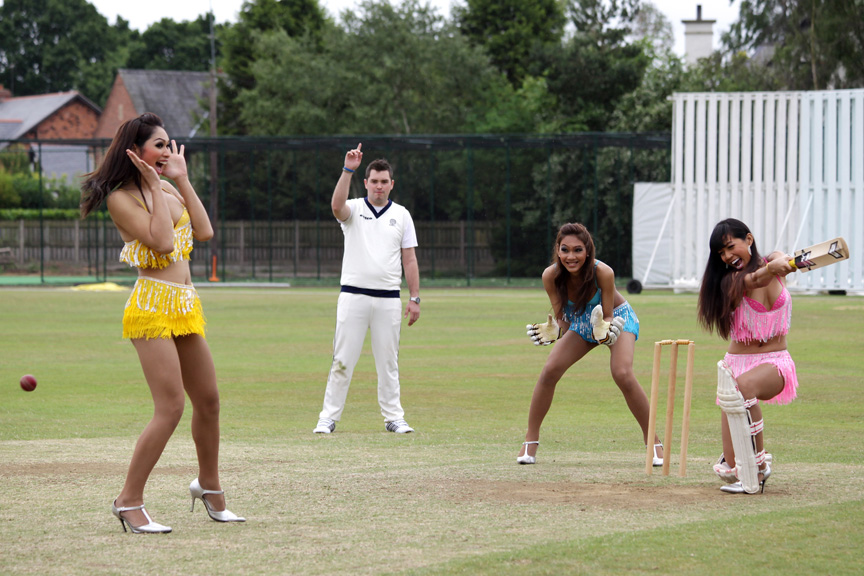 Bangkok and Pattaya ladyboys may prefer bad light to good, but in the case of the Lady Boys of Bangkok and cricketers in general the opposite is true. Mascara free eyes and quick reflexes were needed to get the bat on to the ball, and a deft finger grip and strong wrist action were vital to milk everything from the balls in their efforts to bowl a maiden over. Did I really write that?… my apologies.

“We got hooked on watching this strange game cricket on the TV……..the great thing is that it goes on for days, so we could follow the scoring okay as the runs mount-up………but we had no idea about all the different names for the types of balls and reasons that the batsmen lose-out.”

Another of the ‘gorgeous’ guys Khun Akkarapol from Khon Kaen added;

“I thought it was a bit like baseball, but I found out that I was wrong…….I had no idea that the ball was so hard, it’s a really dangerous game……you would not find me at this position they call silly mid off, right by the batsman.”

Ben Ormsby was suitably impressed by the lady boys efforts in spotting a googly, and for once not getting caught out from behind, and Thailand’s third gender troupe found out about a third man, fine leg and executing a straight hit over long on.  Here’s Ben’s analysis of the Lady Boys of Bangkok’s team performance.

“I’ve seen some unusual sights in cricket but never anything like this……give them their due, these guys had a go, and I think they will understand the game a lot better when they watch it on TV now.”

One can only surmise the cucumber in the after match sandwiches was well fondled prior to its preparation. 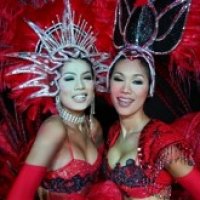 Here’s the remaining UK dates on the Fantasy and Feathers UK 2010 tour.

The Lady Boys of Bangkok shows are eagerly sought out by female hen nights, but they are also attracting more and more men. The troupe of 16 cellulite free ‘Thai showgirls’ become increasingly more well received each year in the UK. The Fantasy and Feathers show is jam-packed (should that be tam-paxed) with superbly choreographed dance routines, singing and raunchy Thai style comedy. This year the Lady Boys of Bangkok have also appeared on ITV’s This Morning Show.

If you get the chance to see one of the shows in the Lady Boys of Bangkok UK tour I’m sure you will not be disappointed. Ticket prices range from £10 to £28. But guys, please resist the urge to jump on stage, drop your pants, and shout ‘Howzat’. If you do, the audience might witness a fine leg across your buttocks, and your googlies whacked for an almighty six. Ouch!.

The Lady Boys of Bangkok are ‘coming’ to a city near you soon.