The Only Way is Up – Thailand’s Coconut Monkeys

Everybody loves monkeys don’t they. My first memory of a monkey was from the 1960’s TV series Daktari starring Marshall Thompson who played the role of Dr Marsh Tracy, a veterinarian working at a Study Center for Animal Behaviour in Africa. Two of Dr Tracy’s closest pals were a cross-eyed lion named Clarence and Judy the chimpanzee. Okay, a chimp is an ape, but back then in my childhood, Judy was a monkey to me. 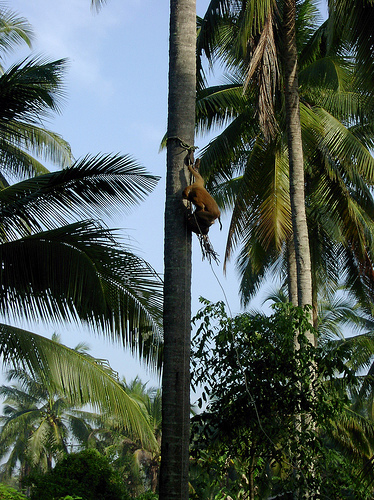 All photographs in this post are from The First Monkey School’s photostream.

My interest in monkeys has been rekindled many times during my visits to Thailand. I have fond memories of walking among monkeys on Hua Hin’s Chopsticks Mountain and being near to them on a trip to Kanchanaburi’s magnificent Erawan Seven Tier Waterfall. Nowadays I don’t find them  so cute close up, their small size gives them speed and agility, and they also have amazing strength. Their teeth look rather sharp too. Judy never looked that nasty.

Long-tailed or pig-tailed macaques (the same I believe) are used to farm coconuts on plantations in Thailand. The monkeys can live for over 25 years but need to be specially trained at an early age if they are to become coconut pickers at work heights of up to 20 metres or more. They may be young but if they want to earn a banana or two, they have to go to college and learn the tricks of the trade.

The Monkey Training College in Surat Thani, Southern Thailand, has been in operation since 1957 when the late Somporn Saekhow (1940-2002) started his monkey training school. Khun Somporn’s training methods were considered unorthodox and alien back in the late 50’s when he started training pig-tailed macaques (Thai ling klang) to climb trees, pick coconuts and toss them down to the ground. Mr Somporn had before seen many coconut monkeys being beaten by their handlers for under performance and picking unripe fruit. Somporn’s way was to train the monkeys in a positive and loving way. 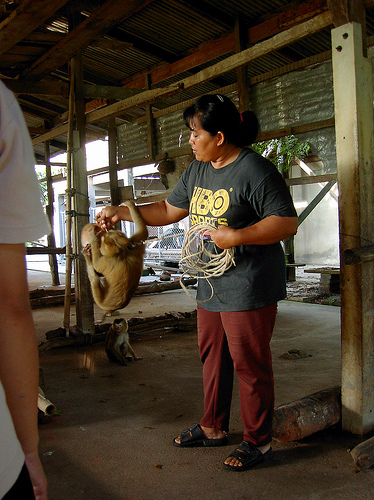 First term at the training college lasts 3-6 months and costs the monkey owners 5,000 baht. Come graduation day the pig-tailed macaques have been taught how to select ripe coconuts and spin them free from their stems as well as how to free themselves if their rope attachment becomes entangled in the trees. The rope is used by the handler to guide the monkey to ripe fruit. Training places an emphasis on showing the macaques kindness and never punishing them for mistakes.

A well-trained male coconut monkey can pick over 1,000 fruits a day compared to about 100 from a fit and experienced person, and the monkey’s handler can expect to be paid about two baht for every nut from the owner of a plantation. At the end of the day somebody has to pick all those coconuts up.

Secondary School training at the college costs 25,000 baht and among other skills, the monkeys are taught to collect grounded coconuts and help put them in sacks or load them on a truck. In the long-term that saves the handlers from paying out on excessive labour costs.

High School is the monkeys finishing term and the trainers teach to the owners specific requirements. The cost for the high school classes wasn’t listed on The First Monkey School website but it does contain some excellent information on the history and training methods of the school. Click on the link to view. 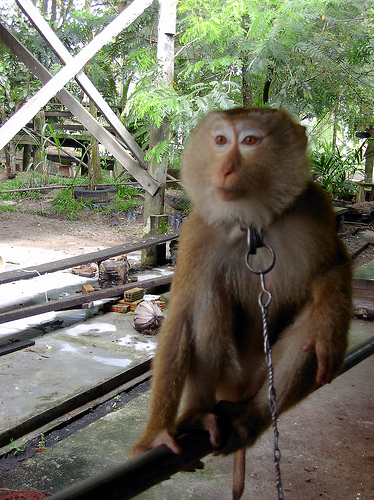 The website also offers accommodation at the school for those who wish to make an overnight stay. Room tariffs start at 200 baht and refreshments are also available including a Beer Singha at 90 baht a bottle. I wonder if one of the high school monkeys part times as the waiter.

In 1993 Somporn Saekhow’s favourite monkey Khai Nui gave testimony to his master’s ability to train pig-tailed macaques. Khai Nui carried Surat Thani’s provincial flag in the opening ceremony of the Thailand National Games. Khai Nui also starred in many TV commercials and was with his master when a fatal heart attack struck Somporn Saekhow in 2002.

For those primatologists and monkeyologists (is that a real word) among you, I discovered a great article during my research about coconut monkeys which originally dates back to 1919 and old Malaysia. The online Natural History article Monkeys Trained As Harvesters documents the use of coconut and fruit monkeys by Malays in the early 20th century to way back in 2500 BC, where Egyptian rock paintings and carvings show monkeys employed to gather figs and palm fruits. Fascinating.

Finally, here’s my contribution to spoil a fascinating subject.

What job description would you give for a Monkey working in a tree?

Try and guess the punch line.