My Very Own Thailand Road Map 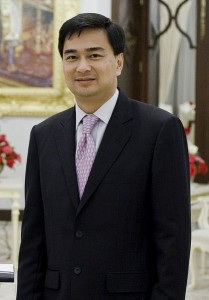 Talen has finally flown the nest and migrated to a land full of smiles. In a few days time Toronto International Airport will hear the loudest woohoooo ever, when Siam Rick boards his flight to South East Asia and a long extended stay in a country brimming with exotic fruits and aromatic spices. Steve, Golf and their young daughter are planning to take flight next year to start a new life in a hot and humid country formerly called Siam. Everybody’s going to Thailand and I’m getting left behind.

Back in June Thai Prime Minister Abhisit Vejjajiva unveiled his five point road map to national reconciliation in an effort to bridge the social and economic divide which has split the nation in two. Two months later I laid out my own personal road map to Thailand as I mentally made plans to leave the UK for a new life in Thailand on August 12th 2012.

Prime Minister Abhisit’s road is a long and twisting one with many mountain passes but his route will be chauffeur driven in a sleek black limousine. My clapped out tuk tuk has a pot holed mountain road glazed with black ice to climb and conquer. My tortoise will need a trail of cocaine to snort and a rocket on its shell if it’s to beat the hare of Khun Abhisit.

I launched Beyond The Mango Juice in August 2008 as a part time hobby. It took a long time before it regularly clocked 30 visitors a day but last month the site had over 4,500 hits and 7,000 pageloads throughout August. That explains why my tuk tuk is clapped out, the road has been a long one so far. Those figures aren’t fantastic but the Mango has grown into a fruit packed solid with Juice. It’s not one of the big league Thai blog players but it is now an established second tier Thai site. I’m quite proud of that when you consider 95% of the blog’s content is written in a small bedroom 6,000 miles away from its target source.

Beyond The Mango Juice followed the course of most blogs by adding Google AdSense to its pages in the hope of gaining a small degree of revenue for the considerable amount of effort put into the blog. Google AdSense works, but in my case I’m never going to get rich from it. My plan was to develop a chain of blogs which might one day earn enough money each month to supplement my savings and allow my dream of moving to Thailand full time come true.

Last year I added Photo Caption to my chain and earlier this year a sports blog called Round Ball Passion. Two weeks ago I added a fourth, Six Two Four, which is a sports gambling blog. The latter is a theme which can generate big earnings in the form of affiliate programs but of course you need readers first. Readers are the mountain my tuk tuk must climb.

I have now added affiliate programs to all four blogs and carefully chosen each program to hopefully suit each site’s theme. On Beyond The Mango Juice I have a Thai dating site called ThaiLoveLines and two hotel booking services. Hotels Combined is a hotel search engine that combines all hotel deals, from all major travel websites into one free, quick and easy search. My second hotel choice is ido24 whose company is authorized by both the Tourism Authority of Thailand (TAT licence no. 14/00232) and Association of Thai Travel Agents (ATTA licence no. 02970). Ido24 provide a wide range of discounted hotels throughout Thailand.

My research on affiliate programs revealed that things don’t just happen overnight. They take time to attract hits and custom, and invariably those hits come from random search engine readers. I’m interested to hear from fellow bloggers (not just Thai themed) who have added affiliate programs to their sites. I’ve a few questions for you.

I realise four blog sites will never generate my target earnings of 500 euros (20,000 baht) a month but I have intentions of adding a further six sites to my armoury. Maybe that’s not enough, but like my present four, each would have to hold a theme which has a big interest to me.

My time has come to try and climb my mountain, I just hope a sleek black limousine doesn’t shove me off the road and send me spiralling downwards along the way.