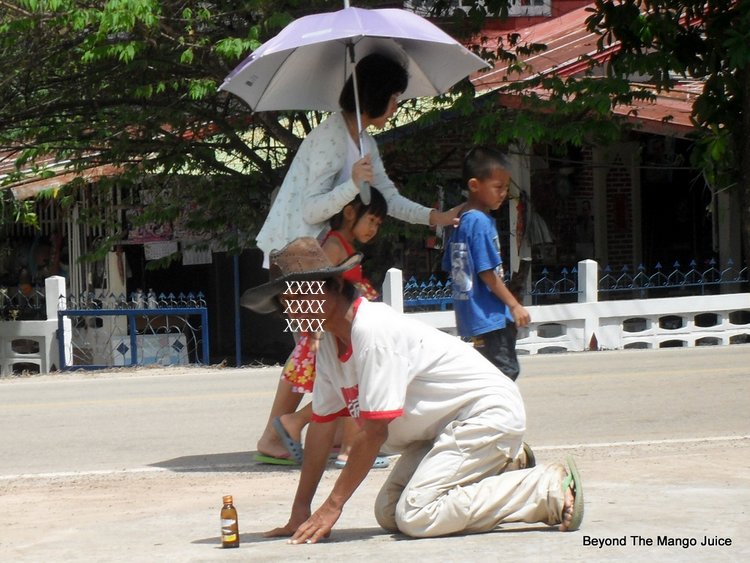 Don’t be fooled by the soft drinks bottle on the floor. It’s filled with rural Thailand’s favourite drink, rice whiskey, branded as Lao Khao. The energy drink bottle is a cheap way for Thailand’s rural working-class men to get a few low-cost shots of the hard stuff from their local village store.

On this particular day, Wonderful Wi and I were visiting one of Wilai’s aunts in Ban Miang Yai (Big Panda Village), about 12 kilometres from Nong Khai city.

The village is on the banks of the Mekong River which separates Thailand from Laos and runs through Nong Khai. Today was one of the biggest days of the year for Ban Miang Yai as it was holding its annual longboat race day.

Wilai’s aunt was laying on a barbecue and drinks for some of her family at her village home. Mid-afternoon the longboat races would be taking place on the Mekong River. It sounded like a perfect day. 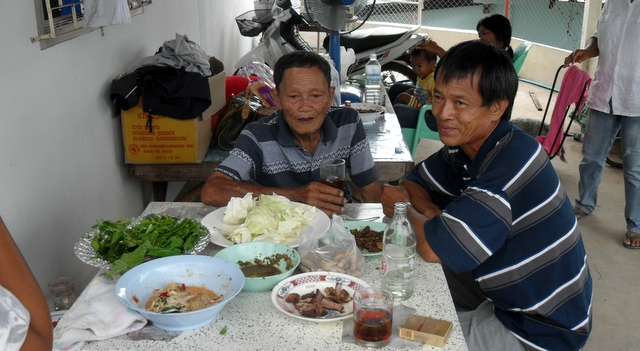 By one in the afternoon the barbecue was sizzling away and nine or ten of us were enjoying ourselves with grilled meats, soft drinks and for the men a few shots of Scotch Whiskey heavily topped up with ice and soda water.

I’d been there for two hours and not spent one baht. My perfect day was getting even better. For me, Thai hospitality in Nong Khai had broken new grounds. I was the one getting free food and drink, excellent. 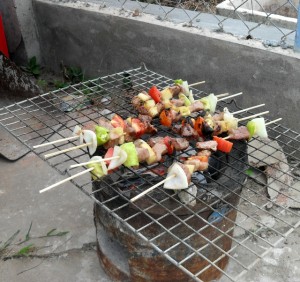 We were all sat at the side of the house, and it had a driveway about 10 metres long. The driveway rose to the main road running through the village.

Twenty metres to the left of the driveway entrance was a very sharp incline which dropped from the main highway to a street leading to the banks of the River Mekong and the spot where the afternoon’s longboat races would reach the finishing line. I walked down to the riverfront and checked it out. Thai singers were singing and dancing on a small stage, and food, drink and souvenir stalls were aplenty. I was looking forward to the boat races.

Back at the BBQ – Whiskey and Lao Khao

On my way down from the highway road I’d passed a Thai man in his early forties stood at the junction of the highway and main village street. He had been standing there rooted to the spot, and on my return a half-hour later, I passed him again in the same place. I guessed his lift to work must be late.

I settled back down to the food, whiskey and jovial banter which was bouncing back and forth among Wilai and her family. A good while later the man was still rooted to the same spot. I wanted to know why.

‘Wilai, why is that man over there just standing on the road and not going anywhere’.

‘Hus…band, I ask aunt same before. She speaks he ding dong (not all there) and dunk (drunk). He like dink (drink) lao khao too much’.

Amazingly, as if by magic, the ding dong and dunk man started to move the 20 metres along the highway toward the top of our driveway. It was painful to watch. It was ten paces forward and nine back. Indecision imprinted on the soles of his feet, either that or wankered.

Eventually, he staggered to the top of the driveway, billowing in an imaginary wind. He then collapsed. Wilai’s aunt got up from where she was sat and approached him. She spoke in a stern voice. 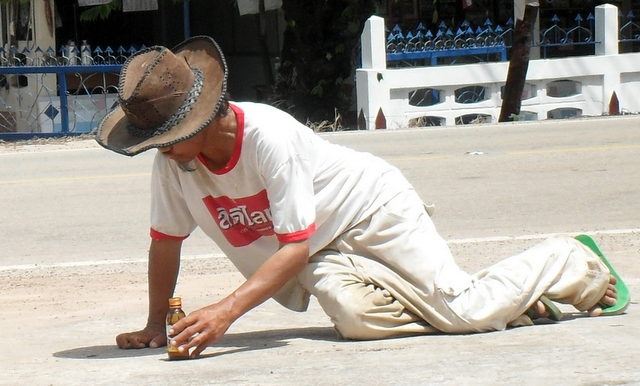 My understanding of the Thai language is limited; my knowledge of the strange Thai and Lao mix they speak in Isaan is even less. Even I knew she had told the man to get up and bugger off.

Then a sea of apathy drenched the tarmac road. The man somehow got to his feet and for the next, ten minutes or so staggered back and forth over a five-metre trail before he collapsed once again, his lao khao filled head just missing the bodywork of our rented car.

A Paramedic and a Prostrate Man

For the next 20 minutes, he lay motionless, making strange wailing and moaning noises. It was as if an invisible gang of thugs were continually kicking and punching him. Then silence broke out. The only sound was the sizzling of beef and vegetables grilling on a barbecue. 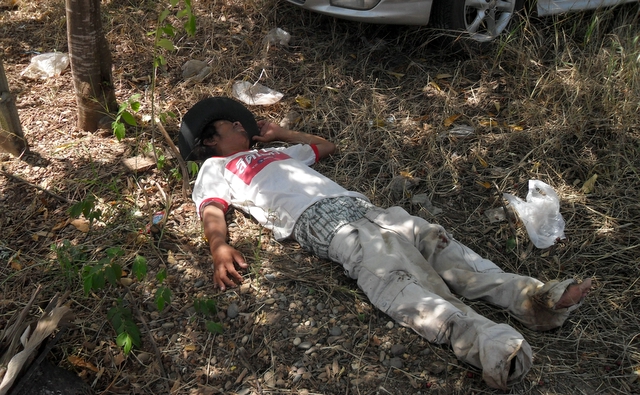 After ten minutes of hush and still from the drunkard man, Wilai turned to me and spoke words which shook and shocked me. It was like listening to the winning speech from someone who had won an English tongue twister contest.

So there I was, a British tourist in Thailand, suddenly turned into a Nong Khai highway paramedic stood over a very still and prostrate body. And before you ask, no, it wasn’t me who pulled his trousers down.

Without my glasses, it took me a few minutes to see the shallow breathing coming from his mouth. He was one of two, alive, or the invisible thugs were now jumping up and down on his lifeless body.

Lao khao is a powerful and potent drink. It also tastes like crap. I know because I once had a lao khao drinking contest with an on-duty police officer at a carnival in Tak. I wrote Carnival Time way back in November 2008.

Wilai and I had a great time watching the afternoon boat races, and we left Ban Miang Yai with the lao khao man still sleeping next to our car, and me wondering how I’d whiled away over five hours with a Thai family and only spent about 30 baht. I also wondered how the English tongue twister Queen might get on with this one.

‘Wilai can you say Roland rode in a red Rolls Royce’.

Best wishes from Beyond The Mango Juice and cheers with a Chang, not a lao khao.