Elephants on the Streets of Thailand 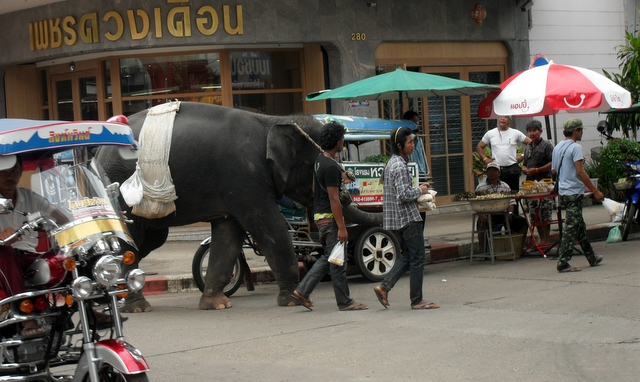 Elephants have a long history and tradition in Thailand with strong bonds to royalty, religion and even war. After the reduction of forestry logging in Thailand 20 years ago, more and more opportunist mahouts brought their elephants into the tourist cities to earn money from nightly forays parading their elephants in the popular tourist haunts. Bags of sugar cane are sold at 20 baht a time to holidaymakers, who unwittingly only encourage the mahouts to risk the elephant’s life and limbs on the busy streets of Bangkok, and other Thai resorts and major cities.

In July this year Bangkok authorities banned elephants from its streets, imposing fines of 10,000 baht ($325) on anyone caught feeding or parading the animals in the city.  The ban was  brought in to keep the streets clean, protect livelihoods from damage and aid free flowing traffic. It seems the elephants own safety was not one of the cardinal reasons. I’m unaware if the ban stretches to the whole of the country ( can someone answer that) because on my recent Thailand holiday it was evident it didn’t. 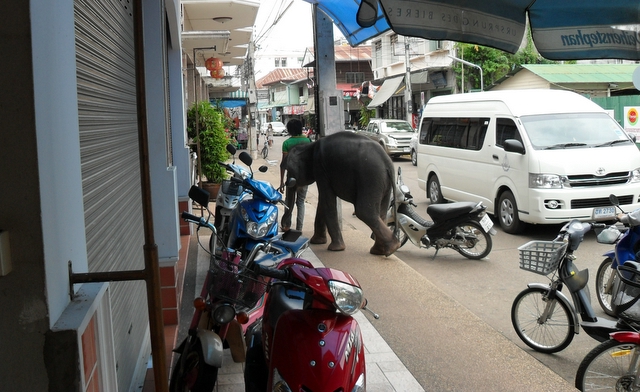 All the photos in this post were taken in Nong Khai during an afternoon on my recent trip there. I was amazed and slightly shocked by the amount of elephants I saw in both Nong Khai and Udon Thani during my two week stay. I did take several pictures of mahouts and their elephants along the very busy road between Udon Thani’s two night markets, but regular readers will know I lost those shots along with my camera on my journey home to the UK. 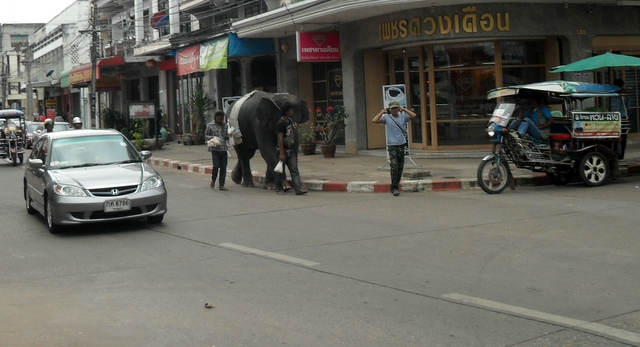 Outside of Bangkok there seems to be little being done to take elephants out of the concrete urban jungle and put them back into their natural habitat. Elephants have been domesticated by man but now the master must give them a little of their freedom back. In Thailand’s national parks and elephant camps they still have to endure daily tourist treks and shows but that is better than dodging cars, trucks, tuk tuks and potholes.

Those tourists who are heading to Thailand over the coming months should remember that feeding elephants in the cities is not an act of kindness, more a kind of role playing in a game of animal torture. Elephants love mud and water, rich green forests, berries and fruit. The cities give them heavy traffic, narrow walkways, noise and mayhem.

When it comes to Thailand’s street elephants being cruel by denying them food is the biggest act of kindness you will ever bestow on these magnificent giant animals.

Please don’t feed the elephants on the city streets.