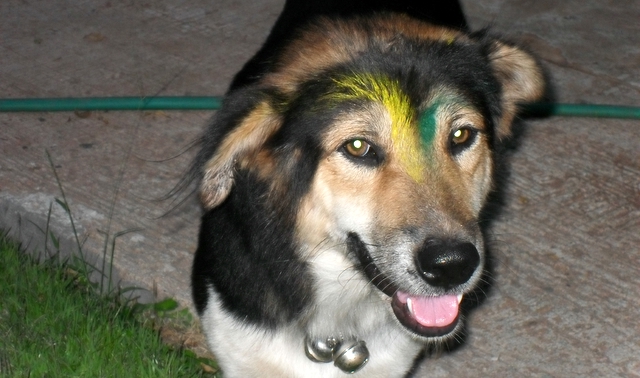 The Australia and England Ashes cricket series has just started and you can be forgiven for thinking Wonderful Wi’s young dog Cola is backing the Aussies. Unfortunately Cola’s war paint was the result of some over zealous village kids style graffiti. When it comes down to having a bit of mischievous fun, Thai kids aren’t any different to their western juvenile counterparts.

After the completion of Wi’s Coffee Shop the young one decided she needed a table and seats to add a bit more rustic charm to her summer-house. A rather old-looking and uneven legged coffee table was added to the balcony but she mused for a while about the seating arrangements. The green fingered gardener eventually decided the purchase of two large flower pots would suffice.

All that was needed to complete the task was paint, brushes and a couple of Wi’s young cousins to add a touch of elbow grease and art. Cola, you really shouldn’t have sat around and watched. 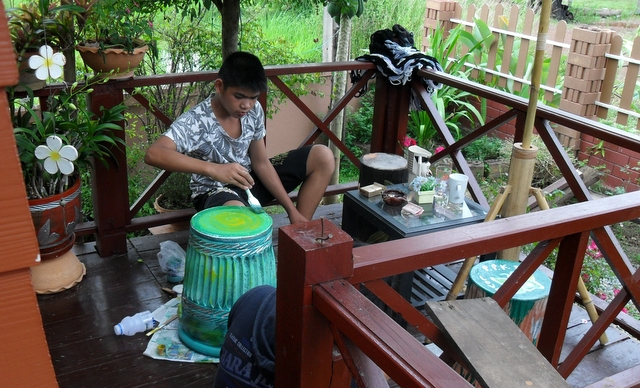 Thai rural people, adults and children, are too often depicted as being….how can I put it….not too clever….and I think that is way out-of-order. Cleverness is not only born in a classroom, it often translates into other avenues of life and being artistically skilled with your hands in one of them. Many rural Thai children have an abundance of these skills and turning a pair of plain red clay pots into work of arts is plain childsplay to most of them.

The kids took a couple of hours painting the pots but when finished the summer-house seats had taken on a complete new look. Cola had too, but his tongue wasn’t long enough for the clean up operation he had in mind. 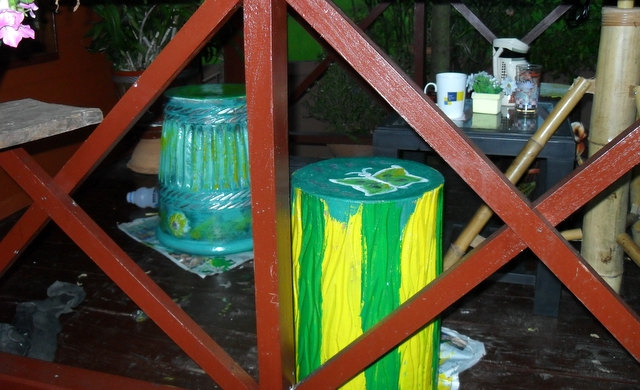 Well pleased with their afternoon’s work, Wi’s two cousins then set about restyling some of the ornaments around the garden fish pond.

One of the things which always amazes me about Thai children is their willingness to help out their family. They give up their own free time without the slightest quibble and set about any given task with a readiness and vigour which is refreshing to see. After all their effort and artistic work even a dog lover like me had to smile at Cola’s new Aussie look.

As our Australian friends might say ” The bitzer sure looked cool.”