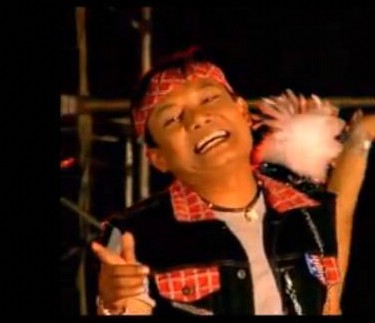 Sanook Singmat (สนุ๊ก สิงห์มาตร) is a Thai country singer and Look Tewadah (ลูกเทวดา) one of his most popular songs. The meaning of Look Tewadah is Angel’s child but its interpretation in Thai society goes a lot deeper.

Look tewadah is a tag given to teenage boys who habitually laze around all day and are nothing but trouble when they do eventually rise from their shut-eye. They race motorbikes along the country roads, get involved in fights and of course have a keen eye for the prettiest schoolgirls. When it’s time to help out with family chores they’re either asleep or too kee kiat (ขี้เกียจ / lazy) to do so.

I think the term look tewadah comes from the Thais notion that an angel doesn’t do much all day long bar sit on a cloud and look down on the world beneath them. Nang Fah is the more commonly used word for angel in a graceful tense.

So why write a post about Sanook Singmat and his song Look Tewadah.

Two reasons, one naughty and one nice.

My apologies if my Thai to English translation is not perfect. Cough..cough…hint…maybe someone can help. Those of you with a Thai partner from Isaan or indeed anywhere in rural Thailand who are in two minds about taking your first jaunt to a Thai village, please view the video and take a close up look at what awaits you in the backwoods of Thailand.

Sanook Singmat’s country music is also a taste of what might keep you awake at night when you’re surrounded by mosquitoes and your partner’s father has drunk your last beer. Did I mention cobras, no I didn’t think I had.