The Mystery of Thailand’s Strange Creature

A few readers may give me some stick over this post being that I’m late discovering the topic. There’s a strong possibility many of you may have read about the mystery of Thailand’s strange creature before. Then again, I’m sure there’s a few like myself who live in a cocooned world and have never heard a whisper of this mystery.

Take a look at the short 50 second YouTube video which shows photographs of a Thai community paying honour to a strange dead creature. The beast has been sprinkled and covered in talcum powder, making its appearance even more grotesque. One theory is the creature is the body of a deformed baby goat.

True or a Hoax?

I spent a fair amount of time trying to find out where and when the creature first emerged. My search failed miserably. I was unable to place where in Thailand the ‘being’ was discovered, but it appears the photographs first appeared in the media about three years ago. This year they’ve resurfaced again on internet forums and websites. 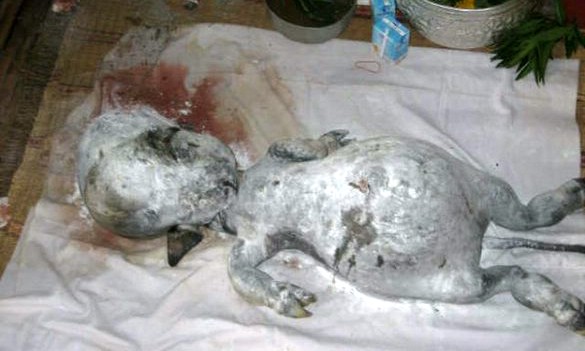 You can make out the creature has a tail, ears and goat-like feet. The swelling is almost certainly due to the body being in a state of decomposition. Now I can hear many of you shouting hoax and perhaps I’ll join in. Then again, maybe not.

My research took me to a couple of ‘mystery and investigation’ forums, and the consensus was the pictures were not fake. There was a strong feeling the creature was not an alien but more likely a deformed baby goat or cow. The photos were shot in a Thai village which begs the question whether the mystery is a community hoax or indeed one set up by a select few locals.

I cannot find an answer to this puzzle, but the explanation could be straightforward. The images may have come from some discarded movie stolen from a Bangkok film studio. The easy thing to say is it’s one giant hoax. Perhaps you know the answer to Thailand’s strange and mysterious creature.