On the Trail Of Thai Ladies Quarter to Three Feet 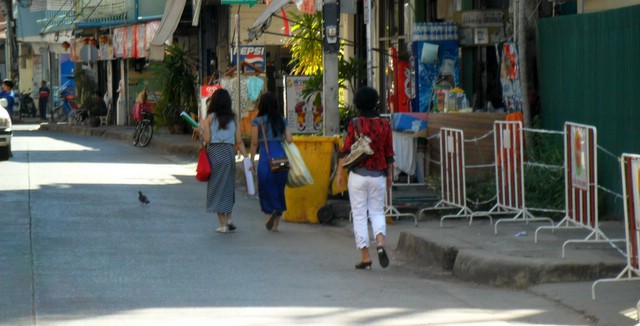 It was a voice inside my head which sent me on my quest to find the truth. I know it wasn’t God directing me, he’d told me many times to let things be. It was a mocking, irritating and grating voice which kept coming back to me.

“Go find Thai ladies quarter to three feet. The truth is out there somewhere.”

It was a mission which most men would flatly refuse but Beyond the Mango Juice picked up the webbed gauntlet, donned a duck-bill, and with a quack, waddle and eventual wobble went in search of Thai ladies quarter to three feet.

The Quarter to Three Feet Theory Partially Explained.
Quarter to Three Feet is being a bit too harsh but haven’t you noticed how many Thai women have splayed feet. For years I’ve wondered why so many Thai ladies have feet which mimic the position of a clock when its hands read a quarter to three. Okay, ten to two is probably fairer but a quarter to three more self-explanatory. My theory points to this being a country girls posture and not someone from the city. I’ll explain my opinion in full later in the post.

I decided to test my theory in Nong Khai. If I were right, there wouldn’t be any quarter to three walkers about because city girls just don’t fit into my scientific rationale on the subject. Wonderful Wi hit Nong Khai’s Tha Sadet market to enjoy a few hours of shopping while I had the more difficult task of capturing Nong Khai’s female feet on film. Can they arrest you for that kind of thing in Thailand?

There were plenty of feet about, but not many of them splayed—seven minutes to one at best. The problem with trying to prove a theory as complex as this is you’ve got to capture both feet on the ground when the person is walking. That is difficult.

There were plenty of people on the streets and main market area of Nong Khai, but a quack sound was amiss. Following women around with a primed camera gets a few nervous glances thrown your way and the occasional muted scowl. 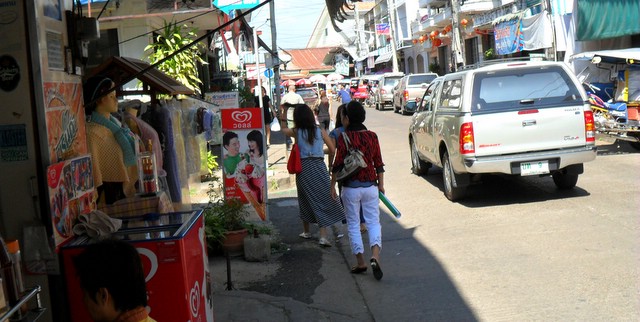 After an hour of fruitless effort and quite a few strange looks, I recalled my grandfather’s last words to me on his death-bed. 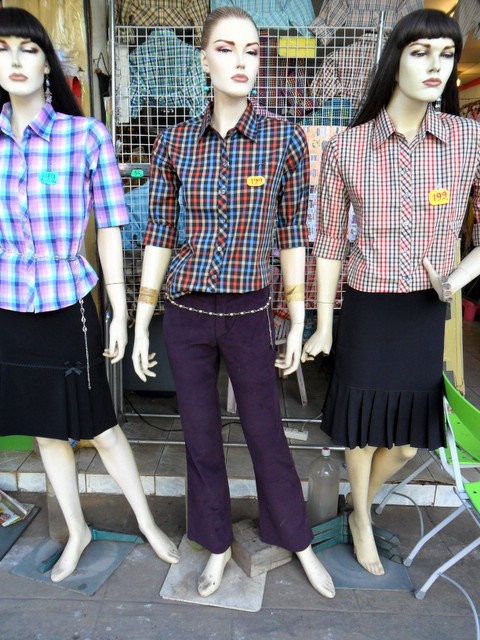 ” If you ever want to know anything about a city, ask a mannequin….if that fails….get drunk.”

Up to now, I’d always skipped the first piece of his advice.

The mannequins refused to answer any of my questions; they wouldn’t say a word. To pressurize them, I stared steadily at their feet. Silence.

Their fashion sense was bland and very autumnal, though their feet were typical of the classical female pose, precisely three minutes to one. For many years this valuable posture has been touted in western wine bars and shopping malls with the aid of a short skirt or dress. It’s a feminine pose guaranteed to make men weak knee-ed and user friendly. The inner left thigh is blatantly shown while the one o’clock pin highlights the full length of the leg. Unfortunately, Nong Khai’s mannequins were more soberly dressed.

I bade them goodbye and went in pursuit of a bar wondering if my grandfather had died of madness as the doctors had said. I guessed he hadn’t and that a city’s mannequins knew everything, Nong Khai’s were just a bit touchy about feet. Maybe I should have tickled them first.

The Theory Further Explained.
My ideology about Thai girls splayed feet has nothing to do with the bars of Pattaya and Bangkok. These ‘special’ feet are acquired from a very young age in rural Thailand and not permanently repositioned by short careers in Bangkok’s hotel beds. Due to growing modernization in Thailand’s villages quarter to three feet could become a rare sight in years to come. I’ll elaborate more on that point later.

Bingo. I couldn’t believe my luck. No sooner had I sat down at a table outside my chosen bar when a waitress waddled up to take my order. When she splayed away to fetch my beer, I swung into action. I’d decided rear photographs were the safest ploy.

I knew most of the bar workers came from outside the city, they were rural girls, and this one had feet which kind of proved it—nearly ten to two, nowhere near quarter to three but my best shot of the day. Satisfied I invested a few baht on the latter part of grandfather’s theory.

A few hours later Wilai met up with me as arranged and on the walk back to the car I suggested we knock over a couple of the mannequins I’d interviewed earlier. Roughly translated, she discredited the idea as an act of folly.

“Can go monkey house (prison) if you make like that Thailand.”

On our drive back to our village home we stopped at a flower garden centre, and it was here I inadvertently ruined my evening meal. 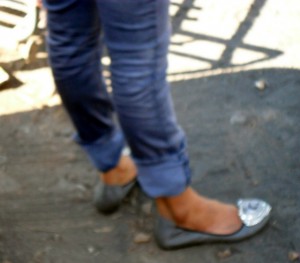 Wilai was the first person to trigger my interest in the quarter to three feet. Hers are ‘Donald Ducked’ quite a bit. She knew beforehand of my photographic intentions in Nong Khai and sensed my eagerness was still at large despite having left the city far behind us.

“Hus….band, I know you take a picture my feet…you think me walk same duck…you speak before.”

“No…I’m taking a photo of you among the flowers.”

Later that evening she served me burnt sausages and very brown crispy chips.

Thai ladies, unlike their feet, are very thin-skinned.

My holiday was nearing its end, and with only a couple of days left in the village I’d given up hope of getting a good photo of a quarter to three feet. I’d taken plenty of shots, but I hadn’t pulled off the perfect one. You do have to snap your camera when the target feet are flat on the ground.

Then one night we went to a restaurant not far from our home. 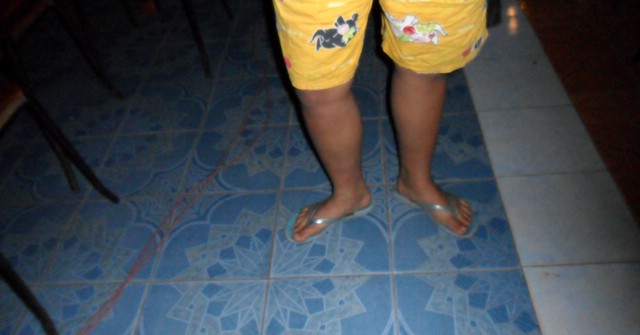 Not the perfect quarter to three feet stance but not too bad. It would do to substantiate my theory.

The voice inside my head finally ceased.

Quarter to Three Feet – The Complete Theory
A friend in Udon Thani guessed Thai ladies splayed feet came about because of their association with working in rice fields. I discounted that straight away. My theory dates back to a ladies childhood and the old-style wooden stilted houses.

Have you ever walked up and down the steps of one of those type of homes? There’s quite a significant height gap between each step; they’re probably built like that to save money on materials. Going up is no big deal, but coming down is near impossible in the usual way of descending western-style stairs.

If you descend in the traditional western way the heels of your feet land on the front edge of the step below making it a slow and uneasy descent. The most comfortable and quick route down is to spread your feet in a quarter to three stance.

I believe from a very young age Thai girls (probably boys as well) develop this method to manoeuvre down the stilted house steps and the stance eventually becomes permanent. Nowadays there are more and more modern brick houses being built in Thailand’s villages and so a quarter to three feet will slowly become a rare sight, and in many years to come possibly disappear altogether. That’s my theory. Does it get your vote?

Yesterday the voice started up again, this time louder, more extended and much more personal.

“How come Thai people think it disgraceful when someone blows their nose in a restaurant yet when you get on a VIP coach there are bogies all over the curtains…… the truth is out there, go find it punk”.