I’ll warn you now. This post is not for the kind of person who is strait-laced, prudish, puritanical or easily disgusted. If the gay movie Philadelphia made you nauseous and sick, then look away now, because this post could leave you feeling altogether limp and a bit ‘queer’. It’s all about Thai university uniforms, but ones with a bit of a twist.

With a gay abandon and a computer keyboard tightly bound in a pink PVC antimicrobial dust cover, Beyond The Mango Juice delves into the dark world of Thai ladyboys and takes a look at the ladyboys of Bangkok dressed in Thai girls university uniforms, under the safety umbrella of Thailand’s educational system. 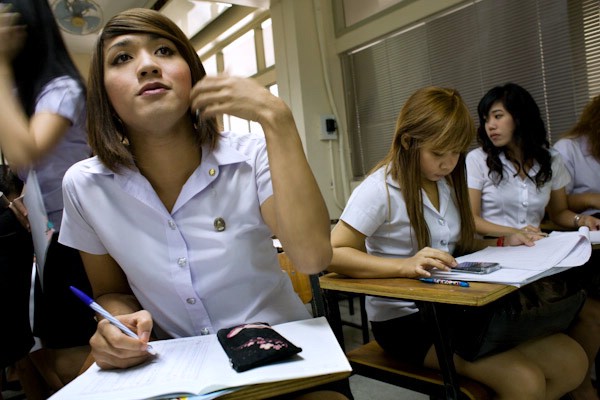 From the outside, Suan Dusit Rajabhat University in Bangkok, looks no different to any other university in Thailand, but on closer inspection it ‘majors’ in a very unusual way.

Ladyboys have been a big part of Thailand’s culture for many years and with the country’s emergence into the tourism sector back in the 1960’s and 70’s, the art and profession of a ladyboy soon spread throughout the Land of Smiles. Nowadays, a sex change surgeon’s scalpel is in operation nearly as much as a corkscrew in Bangkok’s trendy bars.

Ladyboys are not uncommon in Thailand’s universities, and it would be a fair bet to say every school, college and higher educational institution in Thailand has a number of third gender individuals.

However, Suan Dusit Rajabhat University, near Ratchasima Road, Bangkok, has set itself apart from the others. It is believed to be the first educational establishment in the world to allow ladyboys to attend dressed in university girls student uniforms.

The photograph above shows ladyboy Wittaya Jannoi studying in a university classroom alongside fellow (not sure if that’s the right word) scholars. Wittaya is studying for a degree in marketing, and she is best pleased with the university’s stance on Thailand’s third gender sex wearing girls uniforms at Suan Dusit Rajabhat’s educational facilities.

“I’m happy here. We can be ourselves, because we don’t have to hide.”

Suan Dusit Rajabhat University’s policy of treating its transgender pupils as equal to all other students has seen around one hundred ladyboys enrol in search of an honours degree. Handbags at dawn must be an hourly thing in the classrooms near Soi Ratchasima.

Pacharee Suankaew, vice-president for student affairs at Suan Dusit Rajabhat University, had this to say about the their policy towards the university’s ladyboys wearing female uniforms.

“Our view is that everybody is equal. Boy, girl or lady-boy. We try to accept them and not look down on them.”

Now it’s time for you to have your say on whether ladyboys should be allowed to dress in this way whilst attending Suan Dusit Rajabhat University. Here’s a poll;

The poll is now closed due to the voting plugin clashing with Beyond The Mango Juice’s new template theme.  The overwhelming result was a 73% (78 votes) vote in favour of Thai ladyboys being allowed to wear girls uniforms at Suan Dusit Rajabhat University.[dublin-core-metadata]