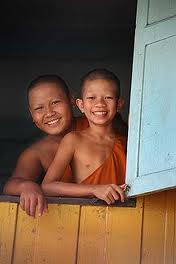 Beyond The Mango Juice is almost certainly known among the Thai blog community as a site which at times dances on the edge of reality and one which throws sand into the face of tried and trusted blog post topics and formats. The Juice cuts loose too often to my mind, and I’m the one who pens it.

Today, a black and white dusty keyboard and a working class boy are about to attempt to put that right. I’m going to try to lay down a sensible and meaningful post.

In a sober state of mind but with a view on life which is often intoxicated by a glass half full, yet overflowing with pessimism, The Juice enters the orange clad world of Buddhism looking to find the answer to…..well….that’s a question in itself.

It may surprise some of you to know I have two books on Buddhism. The first one I won’t mention because reading it fails to ignite the Rubik Cube in my mind. Its complex and deep explanations on Buddhism empty my glass and clutter my mind. The other uses more layman’s talk.

Teach Yourself  Buddhism by Clive Erricker covers the teachings of Buddha, how Buddhists think and how Buddhism has self evolved to meet modernization as the world marches onwards and up. It’s got a lovely photograph on its front cover and big bold words on its back, it’s the bits in the middle I’m going to read again and try to understand more. And I hope many of you equally unenlightened one’s will join me to.

This is Part One of a series about trying to understand what Buddhism is all about.

Teach Yourself Buddhism by Clive Erricker

I hope Clive doesn’t mind me extracting a few passages from his publication but in the interests of properly explaining the mechanisms of Buddhism I feel the need to do so. I’m sure Clive will understand and if not, he is more than welcome to email me his concerns at the address below. 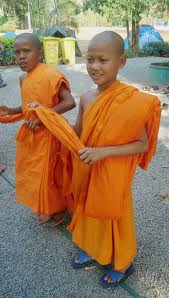 The book starts with a short introduction to Buddhism of which the passage below is part of.

‘Buddhism today is very diverse; this diversity contributes to its richness, and nowhere more so than in the West. Moreover, Buddhism offers teachings and practices that are open to anyone with a little intellectual curiosity and the willingness to accept the modern world can benefit from ancient and timeless wisdom.’

Clive’s opening ‘shot from the Wat’ is tinged with biting reality. The book’s introduction (two pages), explains how Buddhism has, or will have to, adapt to rapid current global affairs in relation to the Buddhist belief in living in the present moment. The world is moving forward at a brisk pace and Buddhism’s reliance on community solidarity has to change to encompass an expanding yet shrinking world in which the populace and its conflicting religions walk side by side.

Maybe they should leave a few of Clive’s books at the Preah Vihear World Heritage site.

Clive’s opening two page ‘shot from the Wat’ is easy enough to understand but the remainder of his work has to answer a few of my queries about Buddhism.

I have many more questions and hopefully Teach Yourself Buddhism by Clive Erricker will have the answers.

Next month the series continues with Understanding Buddhism – Buddhists and Buddhism.

Clive, chapter one is 18 pages long and only has one small photograph. How the hell am I going to read all that in four weeks.