The Three Jewels or Three Refuges 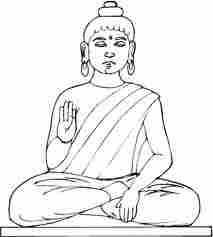 The Buddha, Dharma (Dhamma) and Sangha (not to be confused with Singha) are known as the Three Jewels or Three Refuges, and these are the three things Buddhists commit themselves to when declaring their intentions to follow Buddha’s teachings by doing no evil, to cultivate good and purify one’s mind.

By reciting the following verses three times, one declares oneself a Buddhist. Though I’m not sure if you have to shave off your hair and eyebrows, wax your legs and deflate any blow-up toys first.

Buddha – The Enlightened One
Dharma – The teaching of the Buddha; the Truth or Law
Sangha – The Buddhist community or order

Lay followers of Buddhism (those who are not monks, nuns or novices) undertake five vows known as the Five Precepts and these are rules which outline the direction and intentions of Buddhists.

The five precepts are plainly not fully adhered to by every lay Buddhist but the precepts objective is to show a path to a principled way of life. 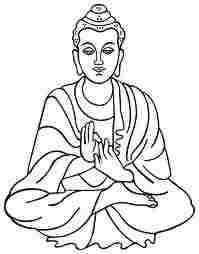 The Ten Precepts are specifically for monks, samaneras (novice monks) and for religiously devoted people. The Ten Precepts are a kind of Buddhist code of behaviour and not commandments such as those in Christianity. They are a monastic code followed by every monk.

The first five precepts are those adhered to by lay followers with the following five orders or instructions added to them for monks and samaneras.

By reciting the Three Jewels verses three times and adhering to the Five Precepts as much as is feasibly possible, you (I assume) can declare yourself a Buddhist.

I’m going to finish this post with a story from the teachings of Buddha which touches on the subject of human suffering whilst accepting that the causes of human pain are not always avoidable.

Kisa Gotami was a young lady who was born into a very poor family but when she came of marrying age she wed a man from a family of great riches. Sadly for Kisa Gotami her husband’s family showed her little respect because of her family’s poor social status, but that changed when she gave birth to a son. She was immediately afforded much kindness and honour in the family home. 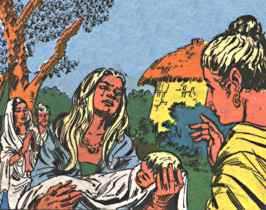 Kisagotami’s son died of cholera (some stories say a snake bite) when he was only six months old and his mother grieved for her dead son but also for the sudden loss of her recent elevated family ranking. In desperation she carried her dead baby onto the city streets and went from house to house asking for medicine for her child. Everyone laughed at her and thought she was mad. A wise man saw Kisa Gotami’s anguish and told her to go find Gotama Buddha and he will offer you suitable medicine.

After a long search she found Buddha addressing a large crowd and she pushed through them and asked Buddha for help. He answered “I can find a cure if you can bring me some grains of mustard seeds from a house where no one has died.”

Kisa Gotami was overwhelmed with happiness and set about her task of getting enough grains of mustard seeds to bring back to life her beloved son and her respected family position.

At each house she visited the answer was always the same. There had been death in each household and after listening to many stories with growing sympathy Kisa Gotami understood that Buddha’s message had been one of medicine for herself.

Kisa Gotami went back and thanked Buddha and asked to become one of his followers.

The story emphasizes the Buddhist concern to treat the root of the problem of human suffering, whilst not admitting that the events that cause such suffering are immediately avoidable. – Clive Erricker

Thank you for reading the second part of my Understanding Buddhism series and I hope like me you have learned something from it.

I’ve included the photograph on the right to show you my current progress along the path of Buddhism. Regular readers can see that despite my baggy orange robes I have obviously put on a few pounds since my last published photograph. This was entirely due to me confusing Sangha with Singha, you’ve been warned.

Mind you my green hair does go rather well with the robes.

Thank Buddha, that’s my one serious post for the month out of the way. I can now get back to writing my own special brand of drivel. Where shall I start?