A dilemma I face each time I write my Thailand blogs review is in which order to place each post. I really hate the thought that I may have offended someone by listing their post last.

As a rule I start with the post I consider to be my favourite from the reviewed month unless situations in Thailand dictate I should give prominence to certain events.

This month I have come up with a simple solution to my monthly headache by drawing their order out of a hat. It wasn’t actually a hat but an old darts trophy I won back in 1992 but nonetheless it has served to put my problem to rest. With that off my chest, let’s move onto my pick of the best Thai blog posts from the month of March.

The photographic theme for this month’s review is Isaan village life. 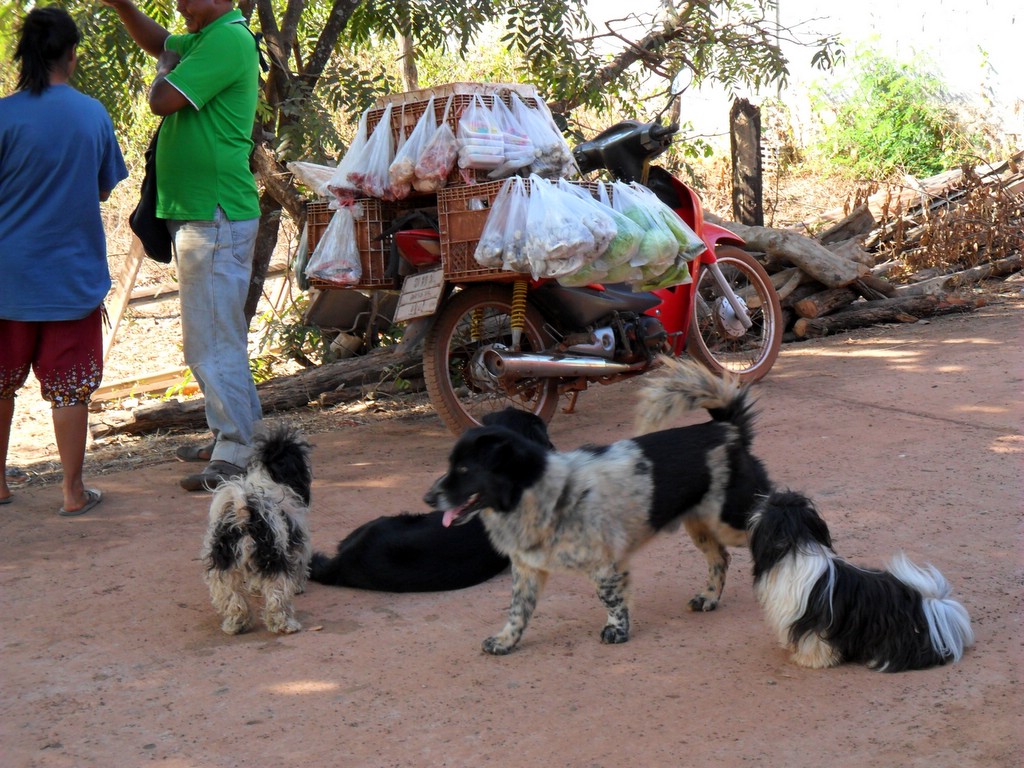 Last month severe flooding hit Southern Thailand killing at least 15 people as rising waters and mudslides affected over one million people in the region. The floods are still causing massive problems as of today and on Koh Samui, resident PADI Course Director Camille Lemmens, has been keeping everyone updated on events on the island via his blog.

Flights to and from Koh Samui were grounded late last month with an estimated 13,000 tourists stranded on the island. Samui update, more pictures is one of Camille’s daily post’s on Samui’s floods and has photographs showing the full extent of the damage caused. Camille’s Samui Info blog has all the latest news from the flood ravaged holiday island.

Early to bed and early to rise is the code of practice in Thai villages. That’s unless there’s a wedding taking place the next day. Life in rural Thailand’s post A Thai wedding, village style! covers exactly what’s in the title with lots of photos and a couple of videos on display. MeMock’s early night’s sleep is disrupted by noisy pre wedding night celebrations and the next morning any thoughts of an extra hour’s shut-eye are dampened by the groom and his entourage parading through the village complete with a music machine and loudspeakers. Get booted and suited and pop over to MeMock’s blog to find out about getting married Thai village style.

You may think global warming has gone to its extreme when you read the title to Thailand, Land of Smiles post More Snow Forecast for Bangkok. Trust me you haven’t, the Big Mango was just going through a very cold spell when Talen visited the capital city last month. Talen meets up with Catherine (Women Learning Thai) and her sidekick driver Khun Pissout, and the three of them set off to explore some of Bangkok’s many temples including the city’s famous tatoo temple Wat Bang Phra. An excellent post written with a lot of humour.

Everybody loves New Year and if you live in Thailand then you’re even luckier because the Thais celebrate three New Years each and every 12 months. The western New Year and Chinese New Year have already come and gone but this month (April) sees the Thais favourite one of all, the Thai New Year Songkran Festival. Songkran is known as Thailand’s water festival and is from April 13 – 15 each year and is traditionally a time to visit and pay respects to elders. Nowadays the festival stills holds its traditions but it is also one big water fight too. Mike Rose explains all about the traditions and contemporary style of celebrating Songkran on his excellent and informative site Thailand-Blogs. 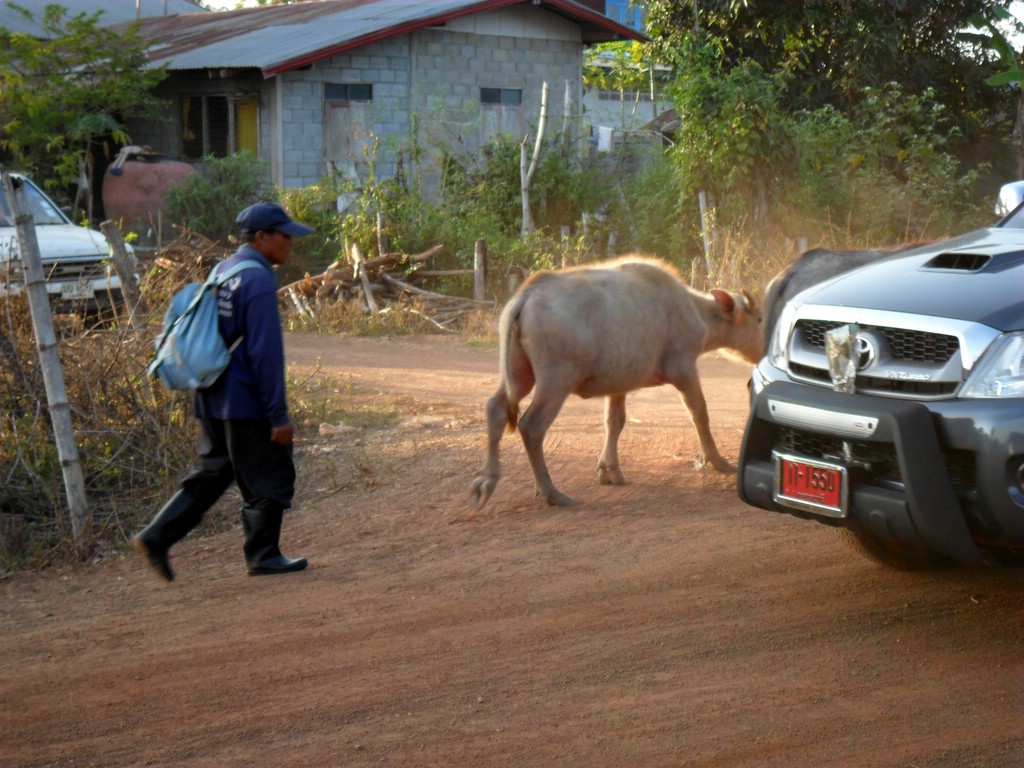 If I could bottle a rural village… is my pick of March from Chiang Mai based blog Cooee. Snap heads out of the big city to the rural pastures of San Phor Loi to visit her friend’s parents and enjoy the charms of Thai village life. There’s khi lek (ขี้เหล็ก) leaves on the boil and ant eggs on the menu as well as Snap samples and savours a true slice of life in rural Thailand.

If you are currently learning to read, write and talk Thai, or have a desire to do so, then Catherine Wentworth’s excellent Thai language site Women Learning Thai…and some men too is a rich resource of Thai language tools, tips and treats. From time to time Catherine does ‘up anchor’ and sail away from her language articles and last month she wrote Expat Living: Brother Dan is Still Sailing Away which is an excellent post following the adventures of her seafaring brother Dan. Sailing single-handed, Dan has an accident onboard his boat and is 30 miles from the nearest shore. Badly injured and bleeding, Dan battles to make it to the Leeward island of Bora Bora. A must read post which carries a five-star recommendation from myself.

Mark Damaroyd author of the Thai based novel Pursuit to Paradise wrote a guest post on Thailand Musings last month titled The Joys of Motorcycling in Thailand. Mark’s excellent musings recall his experiences as a rider, pedestrian and pillion passenger on the Thais favourite mode of transport. From Pattaya to Koh Samui, Mark has a tale to tell, and it’s told in an accomplished style with a large splash of humour as well. This one is well worth hitching a ride to read.

The song ‘Any Old Iron’ was made famous by British music hall star Harry Champion (1866-1942) but in the Land of Smiles they sing a far different tune. Here comes the junk man from Retired in Thailand and Loving It recycles that ‘Champion Tune’ with the words plastic, tin cans and paper as Malcolm and Ciejay prepare for a visit from the junk man. Bag up your empty bottles, tin cans, old newspapers, and head down to Wang Pho in Kanchanaburi to earn yourself a few baht from the junk man.

For those of you who are planning to visit Hua Hin and have a liking for a glass of wine then check out The Thai Pirate first. Ben Shillington visited a vineyard nestled deep in the scenic hillsides of Hua Hin to enjoy a meal and a glass or two of wine whilst admiring the beautiful panoramic view. If you love wine then have a read and raise a glass to The Hua Hin Vineyard.

I don’t want to upset you but there’s something I’ve got to tell you….. She’s not your girlfriend…. is a great post from Siam Rick and Behind the Noodle Curtain (Don’t you just love the name of Rick’s blog). Picking up a Thai girl from a Pattaya, Bangkok or tourist resort bar often leads to the westerner having the false illusion that he has acquired a new girlfriend. So many western tourists and to a degree expats, forget that the lady is a working girl just doing her job. Rick outlines more than a dozen red alert signals and scenarios which might tell you that your dream bar girl is not your girlfriend at all. Good post. 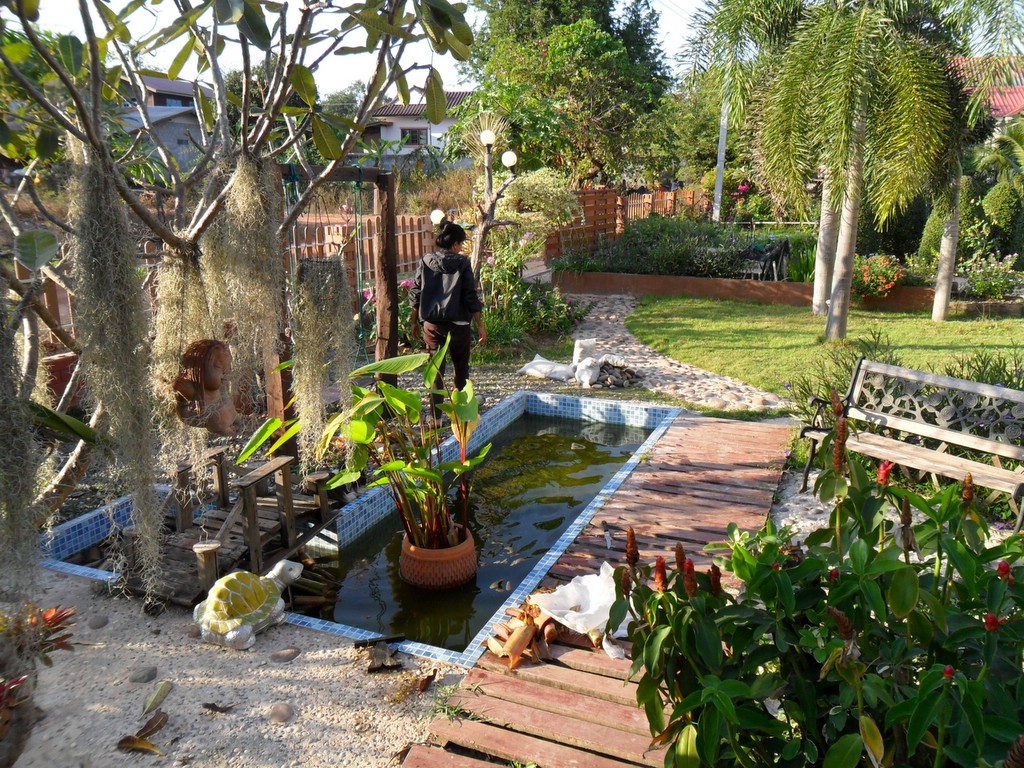 My Jungle Life is another Koh Samui based blog and Right Now….Recovering from the Storms is a post which further highlights the appalling conditions on the island caused by last month’s torrential rain. Jungle Girl recalls a morning when the river’s rising waters burst through her village bringing down bridges, telephone lines, and submerging village homes and businesses. With no electric, phone lines, internet, and drinking water running low, the village is cut off from the outside world. Jungle Girl includes five photographs of the carnage caused by the monsoon rains in this stirring account of Koh Samui’s floods.

Any blog post which has received 42 comments has to have something special about it and Why I Stopped Talking to My Wife As If She Were a Moron fits that description. Many westerners who have Thai partners get into the terrible habit of speaking gibberish to them, or pidgin English to use its proper term. Paul Garrigan looks at the reasons why so many of us use this ‘offensive’ form of English and explains why he’s stopped gibbering when talking to his wife and child. Make it 43 comments by adding your view at paulgarrigan.com.

Lawrence and Thai Life in Phana have spent a lot of time monkeying around in the Don Chao Poo conservation site and its forest during March. The forest is home to 500 – 600 long-tailed macaque monkeys who are a local tourist attraction but their popularity is causing a major litter problem, and the monkey’s themselves are seen as being at fault. Lawrence, wife Pensri and a gang of friends and students start a clean up operation and discover that the monkeys are only partly to blame. Swing over to Lawrence’s blog and find out who the litter bugs really are. Phana’s Pride or Shame? is the first in a series of posts Lawrence wrote about Don Chao Poo’s monkeys during the month of March.

To finish my Thailand Blogs – March 2011 Review I’d like to include my pick from Beyond The Mango Juice during March. Thai Ladyboys Join the Mile High Club is about a new Thai airline who have employed ladyboys as part of their aircrew team. My inclusion of this post also insures none of the great posts listed above had any chance of being listed last.