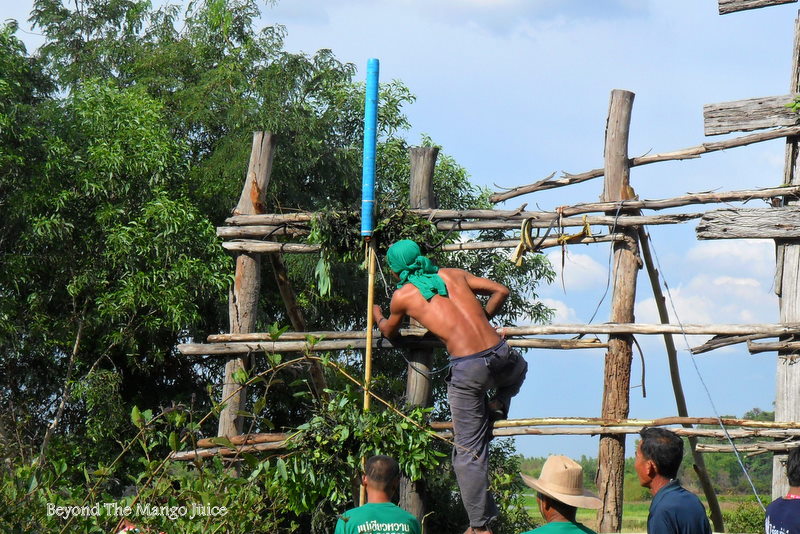 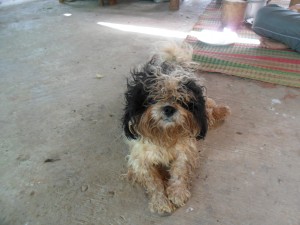 They say a dog is often the mirror of its owner. Yeah, I can agree with that. That’s me pictured on the right. I’m starting to think cameras are the same too. Is it possible that my camera is drinking bucketfuls of beer each day and smoking 40 Wonder Red cigarettes as well, because each time it reaches the climax of its performance the battery goes flat. Yeah, that’s me.

Yesterday (Sunday), Wonderful Wi’s village staged its annual Bang Fai Rocket Festival and within 30 minutes of being there my Samsung camera battery once again gave up the ghost. I failed to capture any of the many rockets in full flight.

My day started with me rummaging through my suitcase for something I knew I’d packed before leaving England. Eventually I found her, blew her up and then listened to what Sticky Wiki had to say about the Bang Fai Rocket Festival.

“A Rocket Festival (Thai: ประเพณีบุญบั้งไฟ Prapheni Bun Bang Fai , Lao: ບຸນບັ້ງໄຟ Bun Bang Fai’) is a merit-making ceremony traditionally practiced by Ethnic Lao people throughout much of northeast Thailand and Laos, by numerous villages and municipalities near the beginning of the rainy season. Celebrations typically include preliminary music and dance performances, competitive processions of floats, dancers and musicians on the second day, and culminating on the third day in competitive firings of home-made rockets. Local participants and sponsors use the occasion to enhance their social prestige, as is customary in traditional Buddhist folk festivals throughout Southeast Asia.”

We had travelled to Nong Khai earlier in the day (hence my low battery level), returning to Wi’s village mid afternoon at a time when the village festival was warming up and its revellers were starting to get into the spirit of things.

Here’s a few photographs I did take with minimal commentary attached which show what a great place Thai villages are especially when it’s party time. 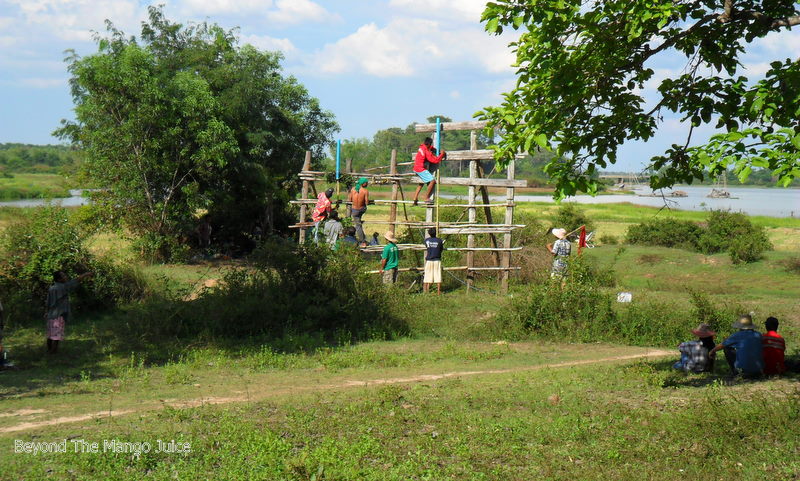 Wilai’s village sits next to the Wang Chang River and it is a wonderful picturesque setting for the many festivals held in the village each year. 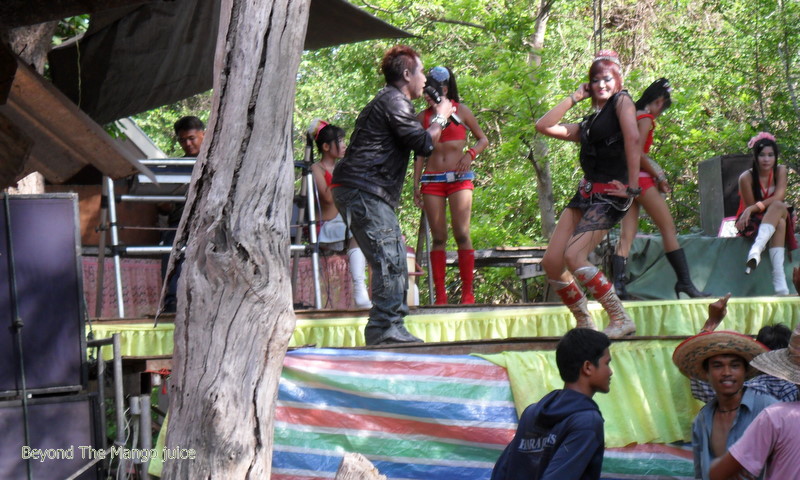 Entertainment was Isaan music provided by a male singer and a troupe of sexy girl dancers. 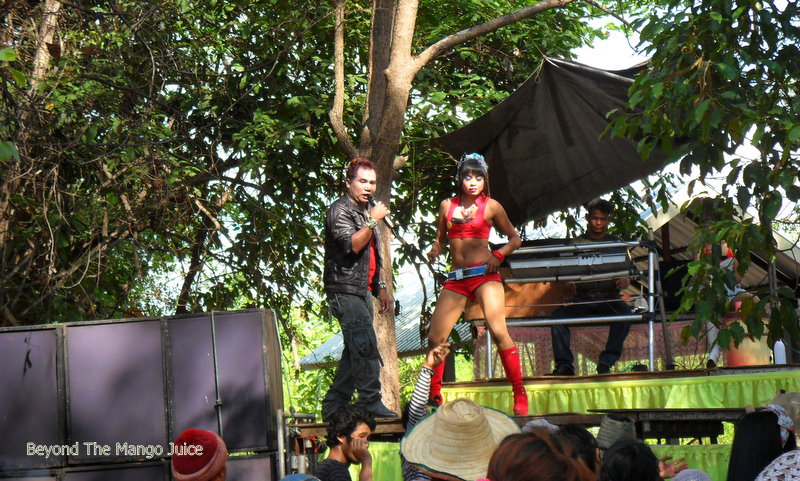 Here’s one very sexy lady who caught my camera’s eye. Micro skirts or shorts and knee high boots seem to be the standard wear for Isaan festival stage dancers. 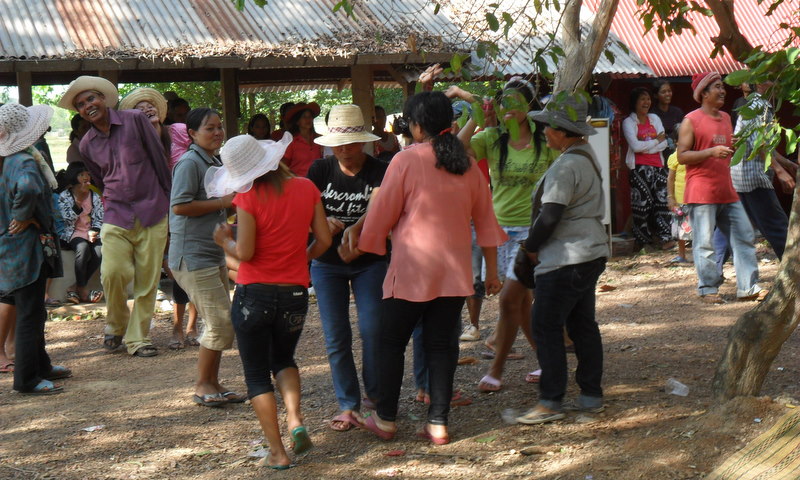 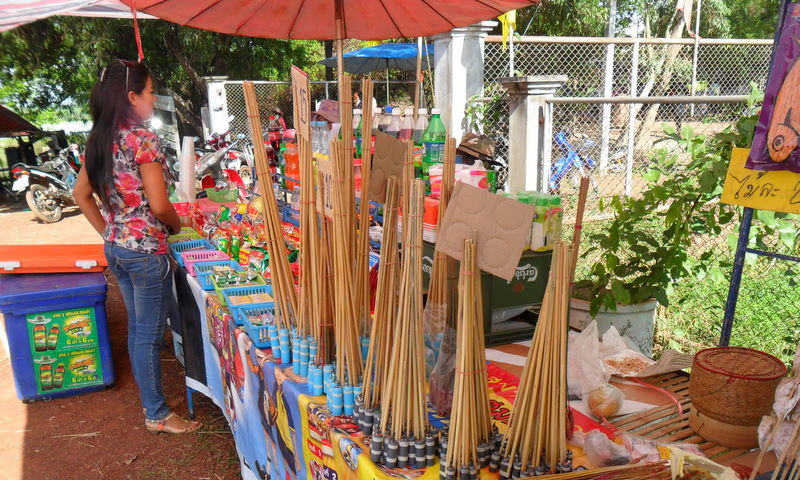 There was plenty of stalls about selling food and drinks and this one sold miniature rockets for your own Bang Fai celebration. They sold beer too, and Wilai is pictured buying a drink for one very thirsty cameraman.

Now is traditionally the start of Thailand’s rainy season and Bang Fai rockets are fired into the sky as an offering to rain gods who in return will give much-needed water for the farmers rice crops.

Last night in Wilai’s village thunder roared and lightening lit the night sky. The heavens opened and it rained like crazy.