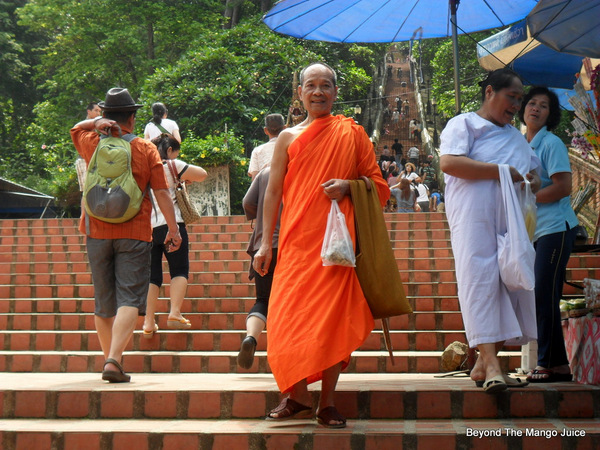 When I first clapped eyes on the sheer amount of steps between me and Chiang Mai’s Doi Suthep temple I prayed to Jesus Christ, Wonderful Wi’s Lord Buddha and any other divine being or infinite spirit who might be in earshot that Wat Phrathat Doi Suthep (วัดพระธาตุดอยสุเทพ) had a knee rehabilitation clinic at the top.

I had half expected to find scattered human bones from defeated mountaineers on my climb to Chiang Mai’s magnificent Buddhist temple perched high in the mountains just 15 kilometres outside of northern Thailand’s cultural city. Instead, I passed puffing and wheezing western tourists whilst I tried desperately to stay in the slipstream of Thai senior citizens who were striding energetically up to the mountain’s summit.

When I did finally scale the many hundreds of steps (309) it was truly worth every cruciate ligament click and puff on my ventolin inhaler. And I’m sure I saw Sir Roger Bannister, or at least a very good look-a-like, collapsed in a heap on the crown of Chiang Mai’s famous mountain. 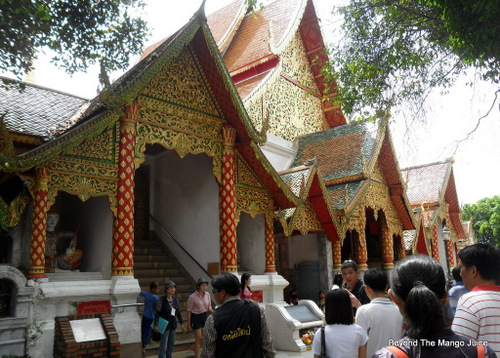 Wilai and myself visited Wat Phrathat Doi Suthep on the last leg of one of two day tours we booked whilst staying in Chiang Mai last month and it was the one place in the region I particularly wanted to see. In one of my recent posts First Time in Chiang Mai I briefly touched on our trip to Doi Suthep and gave a little background to how it came about. Here’s the extract from that post.

‘Wat Doi Suthep’s location was chosen by a white elephant sent into the jungle carrying a relic of the Lord Buddha on its back. The elephant climbed Doi Aoy Chang (Sugar Elephant Mountain) and when it reached the top it circled an area, trumpeted three times, then collapsed and died. King Nu Naone of the Lanna Kingdom interpreted the act as a sign from Lord Buddha and ordered a temple to be constructed there. The mountain is now called Doi (mountain) Suthep.’ 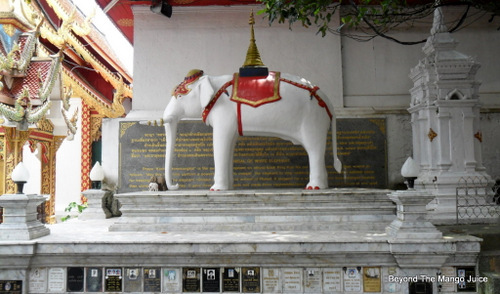 The short story above about the origin of Wat Doi Suthep dates back to 1383 and today, 628 more years down Chiang Mai’s cultural road, the temple is a big tourist attraction to both Thais and westerners alike, and a place which is more than worthy of the steep and energy sapping climb it takes to reach it. 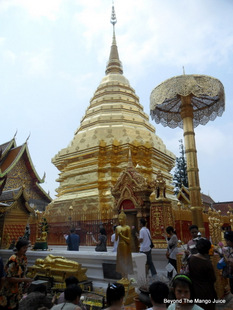 Wat Doi Suthep’s centrepiece copper-plated chedi pictured on the right is housed within a square area which parades pagodas, Buddha statues, mural paintings and an assembly area where monks (or maybe a public class) sit silently in meditation.

The chedi (a mound-like structure containing Buddhist relics) has a giant umbrella on all four corners and visiting Buddhists circle the chedi three times in a clockwise direction carrying flowers, joss sticks and prayer sheets. Each circuit of the chedi represents one of the Three Jewels of Buddhism, those being the three things most Buddhists hold precious in life. The Buddha, dhamma and sangha.

I inadvertently got on the end of the procession thinking it was heading somewhere and after my first circuit I realised my error and exited the chedi at the next corner and took refuge under one of the giant pit lane umbrellas. I put it down to being ‘tyre-d’ after climbing all those steps. 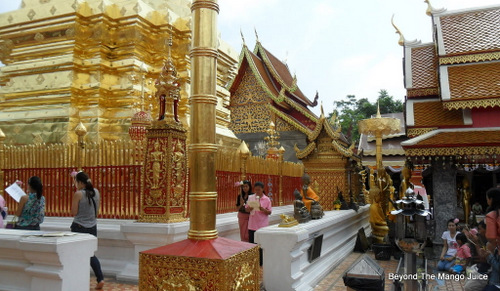 The chedi is 16 metres in height and 12 meters in diameter. One square circuit is probably close to 75 metres and there was a constant stream of Thais joining the procession.

Below are a few more pictures I took at Wat Doi Suthep. 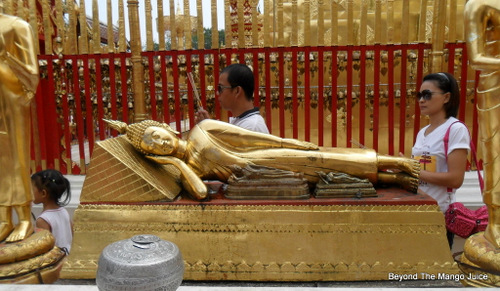 The temple and its grounds have been subject to much renovation work over its long history and all structures, statues and artefacts were in excellent condition. 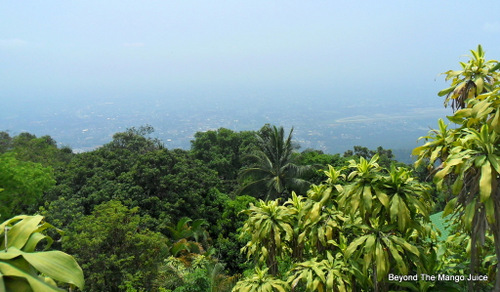 In 1935 an access road was built to the temple but before that a long trek through a jungle trail was undertaken in order to reach Wat Doi Suthep. The road has paid dividends with hordes of both Thai and western visitors to the temple each day. The photograph above is from Wat Phrathat Doi Suthep overlooking Chiang Mai city. 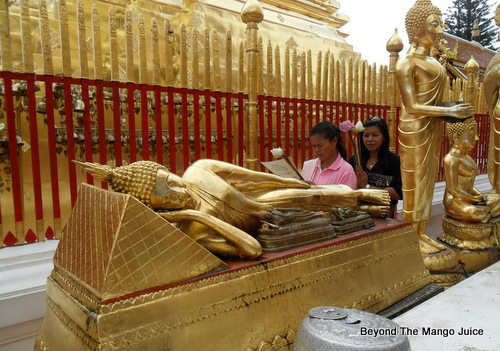 There’s someone I recognise. Young Wilai. No doubt she’s asking for winning lottery numbers, a better paid job for me, and hopefully a successful football season for Crewe Alexandra FC. Wilai, was that FC or KFC I heard you whisper. 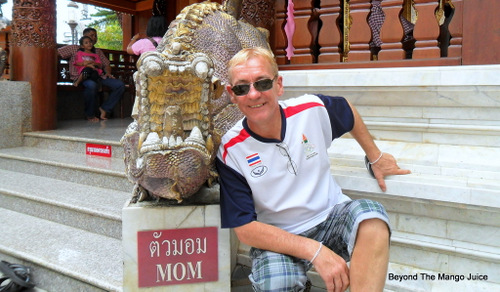 This photograph is 100% proof that mothers are better looking than sons. You wouldn’t want to meet the blighter on the right on a dark night.

The entrance fee to the temple was 30 baht (included in my day tour fee) and free for Thais. Wat Doi Suthep is open seven days a week from six in the morning to eight at night. Weekends are rumoured to be very busy.

They say you’ve got to be in it to win it and I’m proud to say I was. Wat Phrathat Doi Suthep certainly ‘won’ me over.