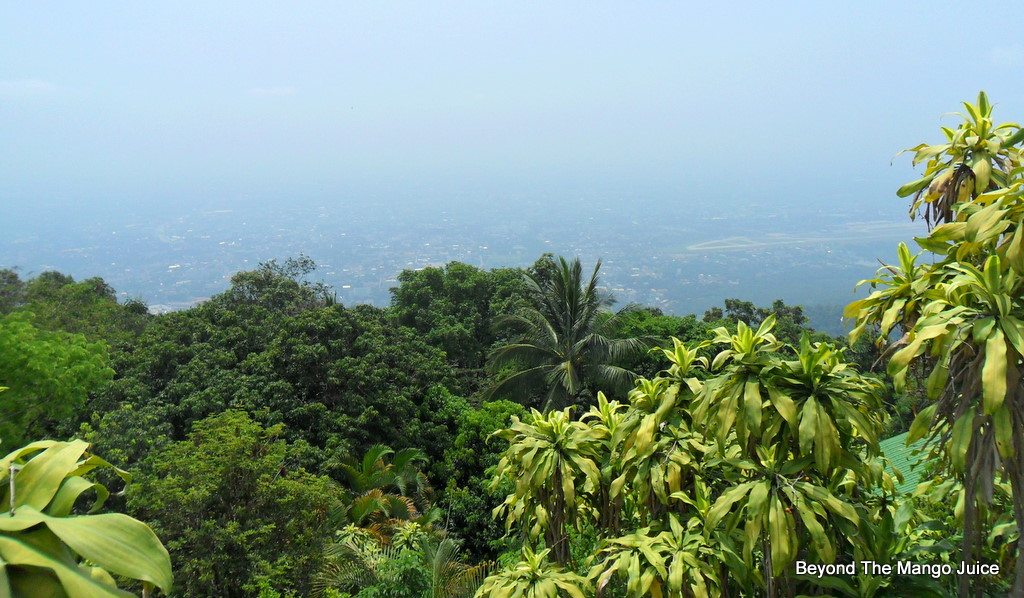 Chiang Mai is Thailand’s second largest city (that’s it sprawled out beneath the mist), lagging way behind the county’s capital Bangkok in terms of size and population. Thailand’s capital has a populace of over 9 million citizens and Chiang Mai about 170,000, a huge gulf which mirrors the 700 kilometres which separate the two cities.

The northern city of Chiang Mai is a place I’d always wanted to see but one which for one reason or another I thought I never would. That was until last month when Wonderful Wi and myself flew from Udon Thani to spend four days and nights in Chiang Mai.

Our hotel was in the Thapae Gate area of the city, just 300 yards from the entrance to Chiang Mai’s old walled city (photo below). Our 10-15 minute taxi ride from Chiang Mai airport to the Tapae Place Hotel cost only 120 baht which was considerably lower than a similar distanced taxi journey would be in Udon Thani. 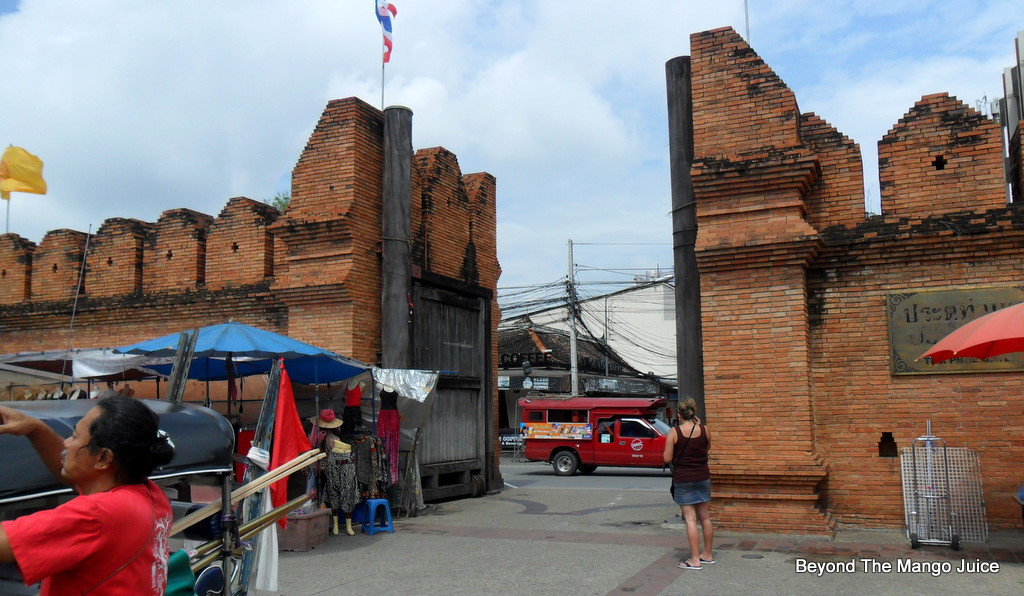 The taxi fee was a refreshing surprise but there was still one more to come. When we checked into our hotel the room rate had been reduced to 590 baht a night from the advertised 650. Chiang Mai had given us a two-fold warm welcome for starters. If first impressions really do last forever then our ensuing four days had a cheap, charming enchantment about them.

Our time in Chiang Mai, aside from two day tours, was spent in and around the proximity of the Thapae Gate area and so I cannot give an overall opinion of the city. However what I did see didn’t fail to impress me and disappoint a little at times.

Let’s get those disappointments out-of-the-way first.

I should have known better but I thought it being low season tourism-wise in Thailand there wouldn’t be too many westerners in Chiang Mai. I was wrong, there was that many I half expected to trip over one when entering our hotel bathroom. Heaven knows what the city is like during high season.

There was also a glut of massage shops in the Thapae Gate area, everywhere you turned one came into view. I’m sure most of them were kosher but I felt that Chiang Mai’s claim to being the foremost cultural city in northern Thailand was tainted by their over the top presence.

My biggest disappointment of all was on one of our day tours which started with a visit to a Hmong village. I was expecting to see long necks, war paint, big ears and bangles, but a shiny new Nissan truck parked in front of a massive TV satellite dish set the tone for our short stay. The village looked like most others I have visited in Thailand although seeing Hmong women weaving silkware in a wooden shack factory did save the day. 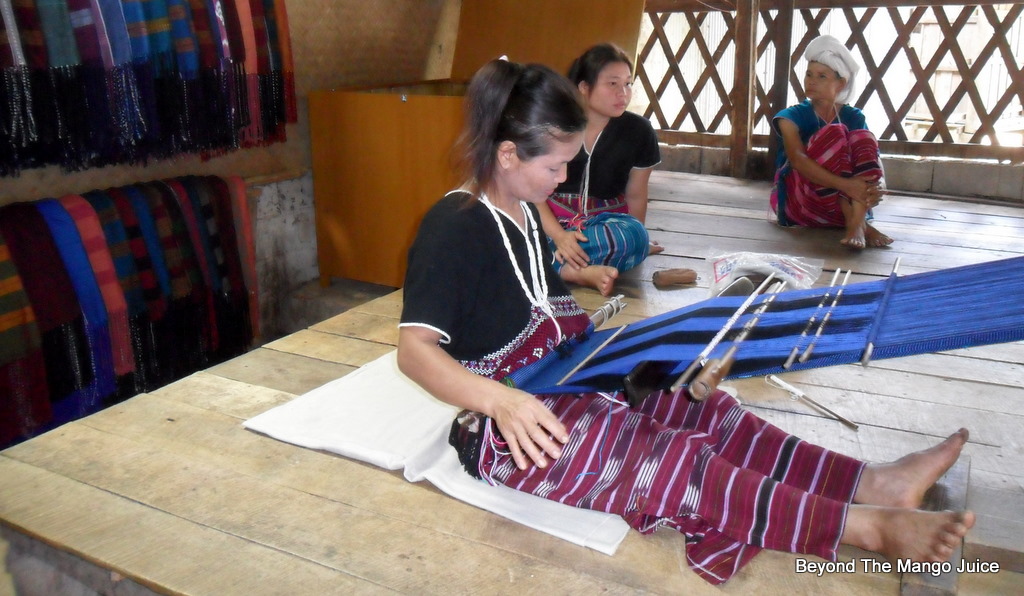 However there were many more positives than negatives about Chiang Mai. 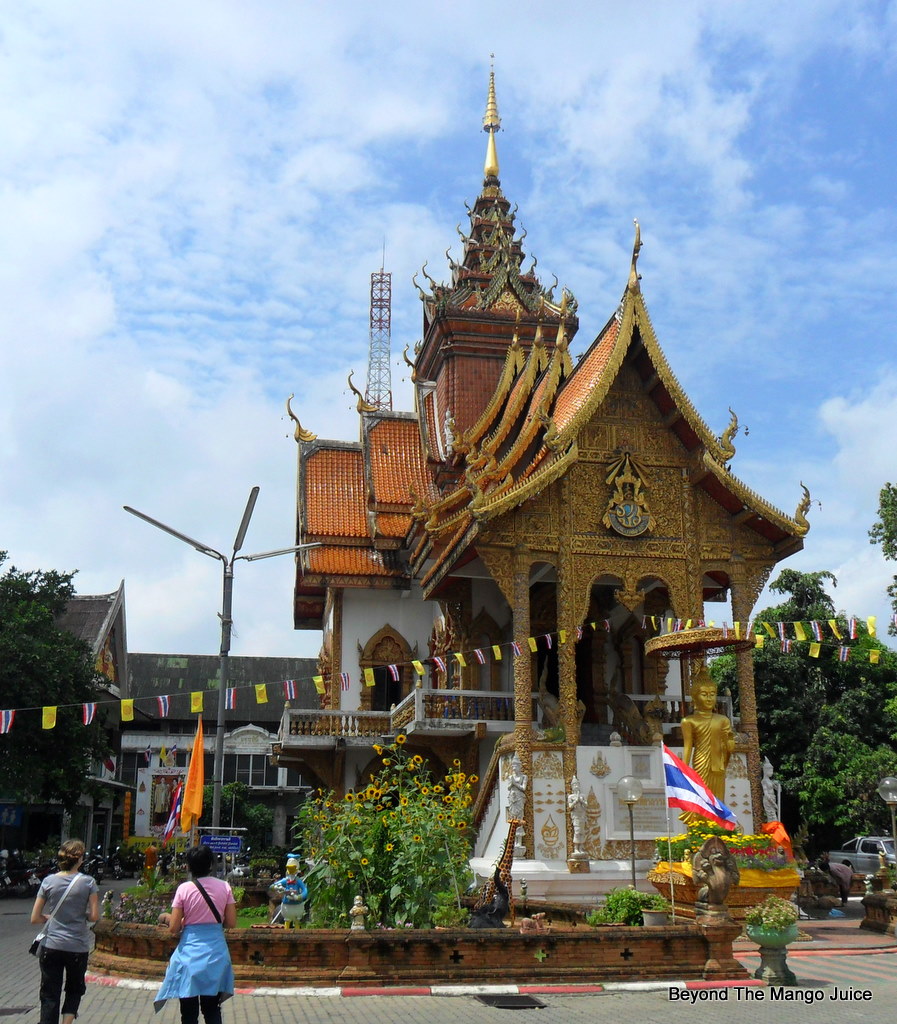 Temples were also plenteous in the Tapae Gate area, and one, Wat Bupparam (photo right), was next to our hotel. The temple was founded by King Muang Kaew in 1497 and has a Buddha image carved from teak wood which is the largest of its kind (teak wood) in Thailand. After unpacking my travel bag I headed straight there to have a good look around.

One of our day tours concluded with a visit to the most famous temple in the Chiang Mai region, Wat Doi Suthep. The temple stands atop a mountain overlooking Chiang Mai city (see top photo) and it dates back to 1393.

Wat Doi Suthep’s location was chosen by a white elephant sent into the jungle carrying a relic of the Lord Buddha on its back. The elephant climbed Doi Aoy Chang (Sugar Elephant Mountain) and when it reached the top it circled an area, trumpeted three times, then collapsed and died. King Nu Naone of the Lanna Kingdom interpreted the act as a sign from Lord Buddha and ordered a temple to be constructed there. The mountain is now called Doi (mountain) Suthep.

Below is one of many photographs I took at Wat Doi Suthep and I plan to write a post about the temple at a later date. 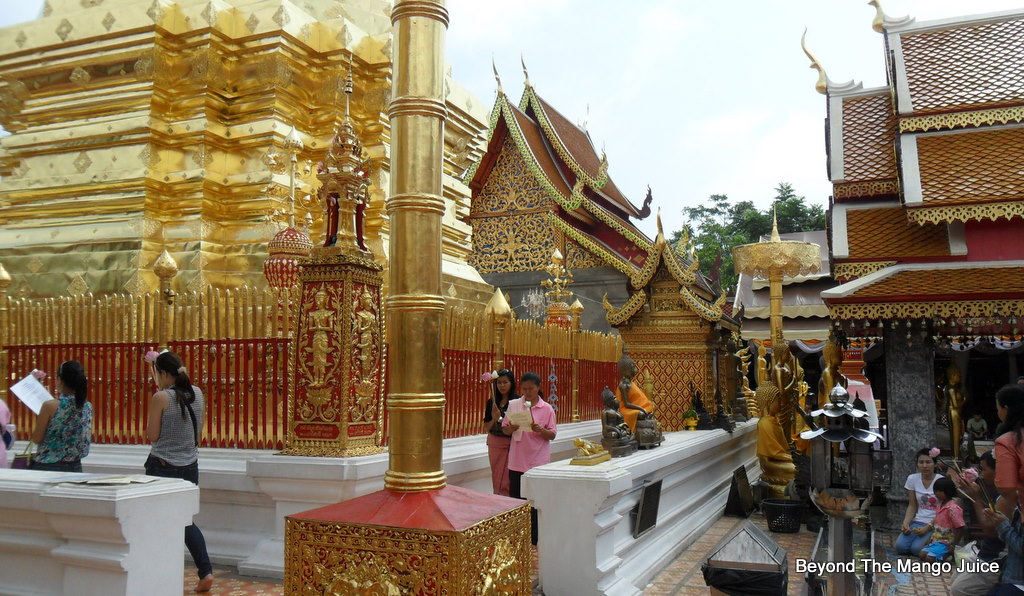 Getting around Chiang Mai city is easy with songthaews (small buses) regularly combing the roads but Wilai and I opted for tuk tuk rides when we needed to get somewhere quick. The fares were very cheap and again considerably lower than Udon Thani’s similar samlor transport.

Nightlife in the Tapae Gate area of Chiang Mai is lively even in low season. There were plenty of bars full of good-looking Thai girls, the occasional go-go bar and enough massage shops to relieve a fully packed fleet of Boeing 747’s. Beer and spirit prices were reasonably priced and the bar staff charmingly cordial too.

A visit to Chiang Mai wouldn’t be complete without seeing its famous Walking Street Sunday Night Market. The market starts outside Tapae Gate and heads into the old walled city down Ratchadamnoen Road further than the eye can see. Most of the goods on sale are similar to those at all Thai markets but the Walking Street Market also has many handicraft wares made locally. Silk, wood and paper craftmanship were on sale at many of the stalls. 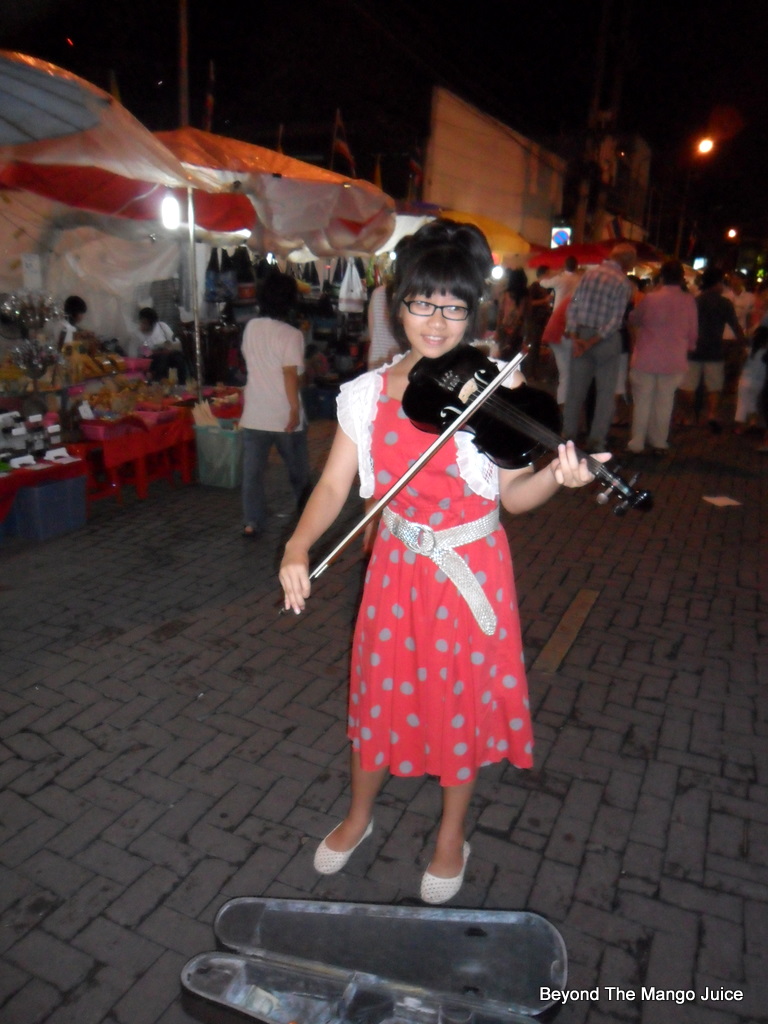 What I liked most about the Walking Street market was the street entertainers. There were dancers, music bands and musicians all doing their bit to add to the heady, electric atmosphere along the packed one kilometre or so of Ratchadamnoen Road. And for once Chiang Mai’s vast number of western tourists were heavily outnumbered by Thais.

After half an hour of soaking up the market’s colour, noise and ambiance, I danced to my usual tune and headed for one of the market’s bars leaving the budding Vanessa Mae’s and Sanook Singwat’s to entertain their many appreciative admirers.

Wilai and myself both enjoyed are stay in Chiang Mai and intend returning again within the next year or two. We visited many other tourist attractions during our four-day stay, some of which I’ll write about in the future but our return will not be during Thailand’s peak tourist season.

Chiang Mai is a lovely city but there was too much farang presence about for my own liking in the area we stayed. For that reason I’m going to deduct one point and give northern Thailand’s cultural city a handsome nine out of ten for its quality as a holiday destination.