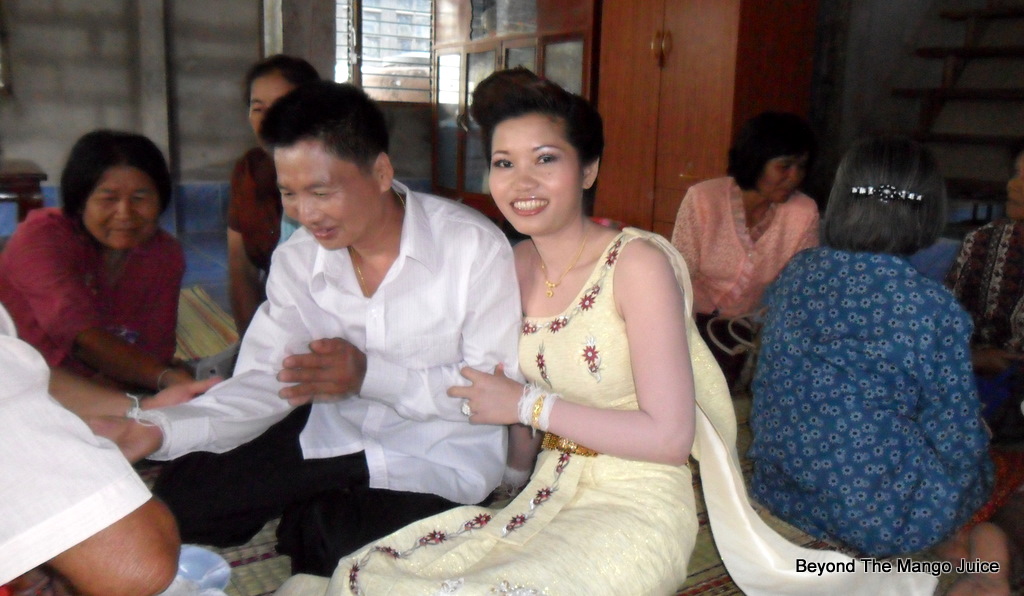 The top photograph is from a Thai wedding I attended in Wonderful Wi’s village in May this year and if you’ve never had the pleasure of attending such a celebration then please do read on because in Isaan’s villages wedding bells ring nearly as often as cow bells do, and a village style wedding is a fantastic ceremony to see. My invitation to the couple’s marriage was delivered in typical Thai style on the day of the big event.

The wedding took place on a Thursday morning and the evening before Wilai went to the home of the bride’s mother to share a nibble and dribble of som tum and lao khao with family and friends of her old schoolmate Noi who was getting married the next day. Unfortunately Wi wouldn’t be able to attend the wedding ceremony due to plans we had already made…at least that’s what I thought.

On the day of the wedding Wi and I woke with an air of excitement as we were due to leave the village at ten that morning for Udon Thani airport where we had a flight booked for a four-day stay in Chiang Mai. By half past eight I had showered and was surfing the internet whilst Wi made final preparations to our luggage. Wi then came up to me and said something which came like a bolt out of the blue and perfectly matched the blue top and casual shorts I was wearing in readiness for our journey to Chiang Mai.

” Hus…band, now we must go friend house and see marry come. We can stay one hour”

” We’re going to the wedding….you didn’t mention it before. I’d better go and change my clothes” I replied.

” Not change clothes over. Thailand you can go see marry like that. Can do Thailand.”

Two minutes later we were on Wi’s motorbike and on our way to her friend’s wedding which was just a couple of hundred yards away. 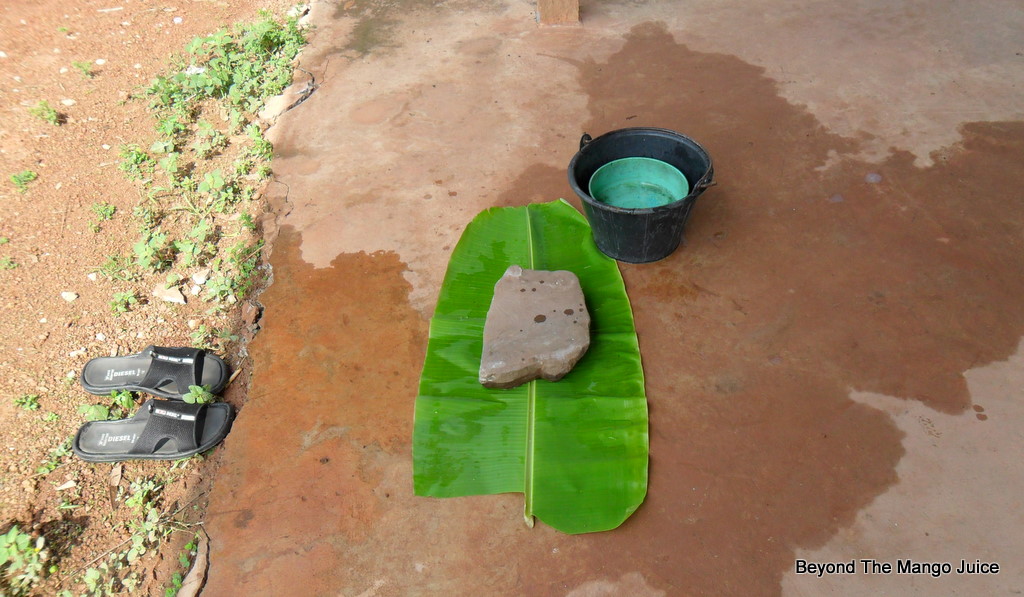 On the cement porch at the entrance to the bride’s family home this piece of Thai ingenuity caught my eye straight away. Wi had to drag me away from it because it had me rooted to the spot. I’m unsure if this village style ‘foot-wash doormat’ is a part of Thai wedding traditions because it was the first time I’d ever seen one. Very clever. 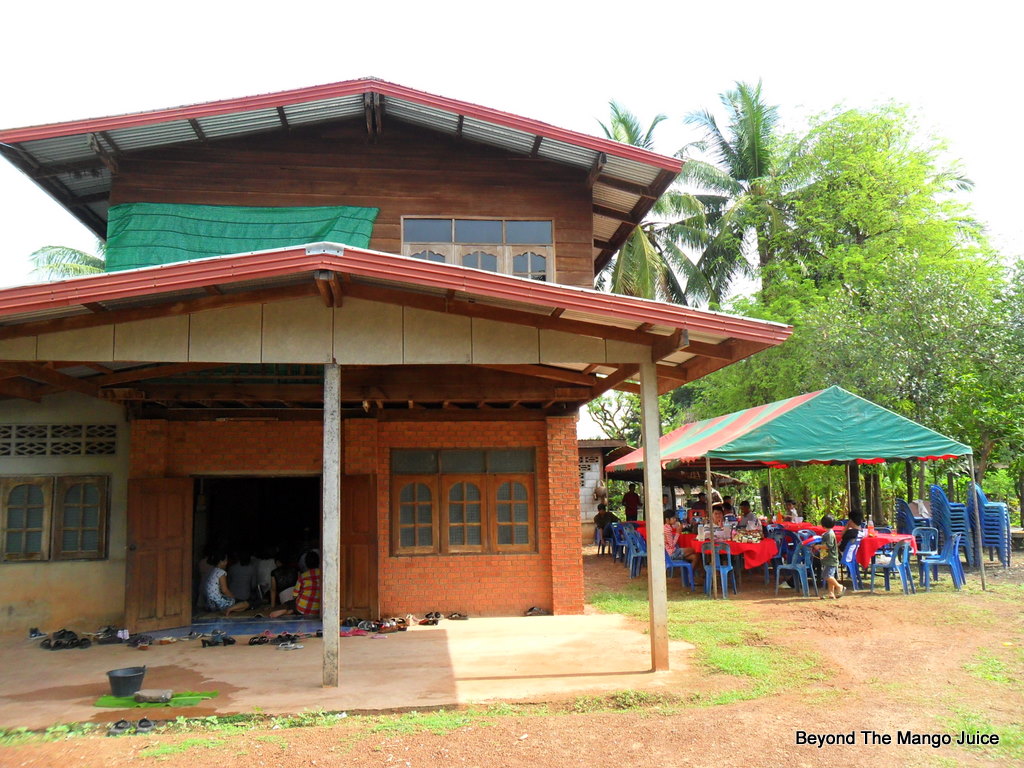 By the time we arrived the ceremony was well under way and a party of monks had already blessed the couple, received merit in the form of food and returned to the village temple.

A wedding ceremony in Thailand is often conducted by an elder male who blesses the couple and links the bride and groom with a length of white string which is soaked with holy water. By tradition the couple’s string link is then broken and whoever has the longest length attached to their wrist is thought to be the one who possesses the deepest love.

Relatives and friends are invited to perform a ritual called Sai Sin where lengths of white string are individually tied around the couple’s wrists. The Sai Sin wedding ritual is an act of gifting good luck and prosperity to the newly weds. 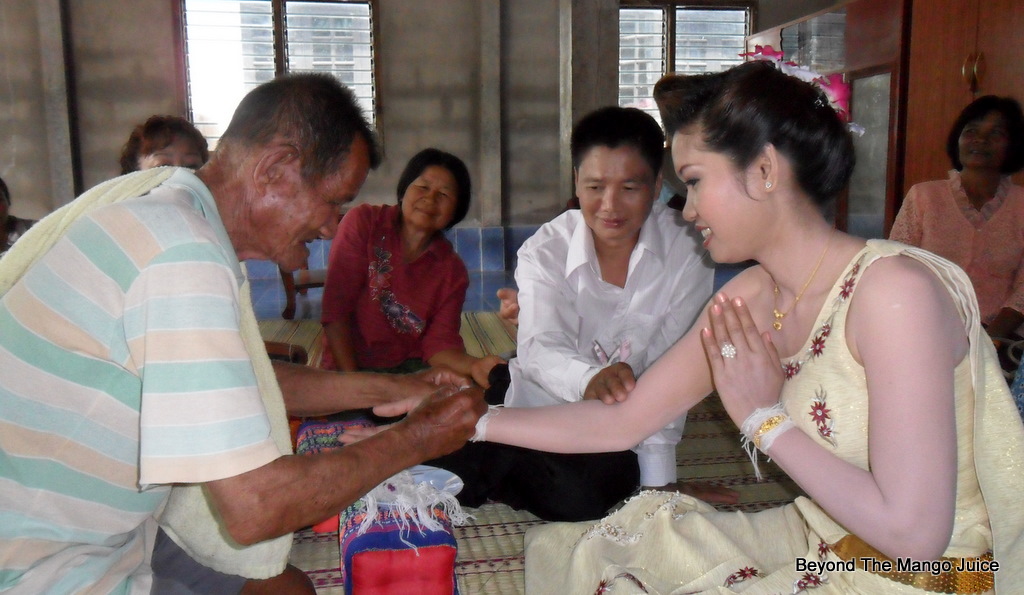 Sai Sin is an interesting Thai wedding custom because it fits ‘hand on wrist’ with the western marriage expression ‘to tie the knot’ which has many explanations to its origin. My favourite is this one… ‘He has tied a knot with his tongue, that he cannot untie with his teeth: i.e. he is married.’ source The Phrase Finder. I think the groom at this wedding was rather lucky to be marrying such a beautiful Thai bride. 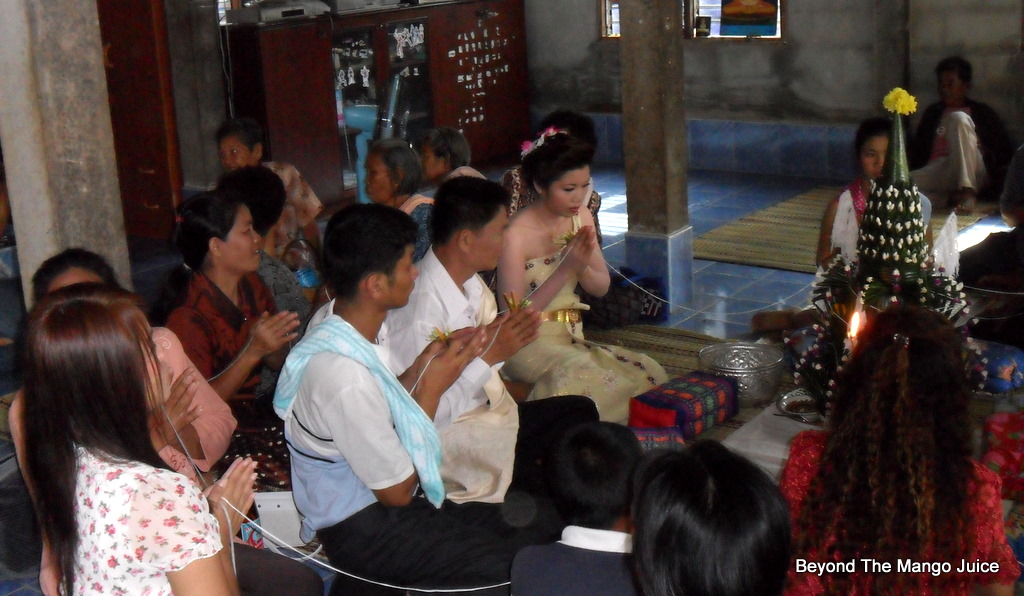 The family home was a typical basic brick-built wooden topped village house with a bare concrete floor adorned with woven mats. Guests were spread about the main room with the bride and groom holding centre stage. In one corner there was a group of men following the proceedings whilst enjoying a few bottles of beer. As Wilai said ….Can doThailand. 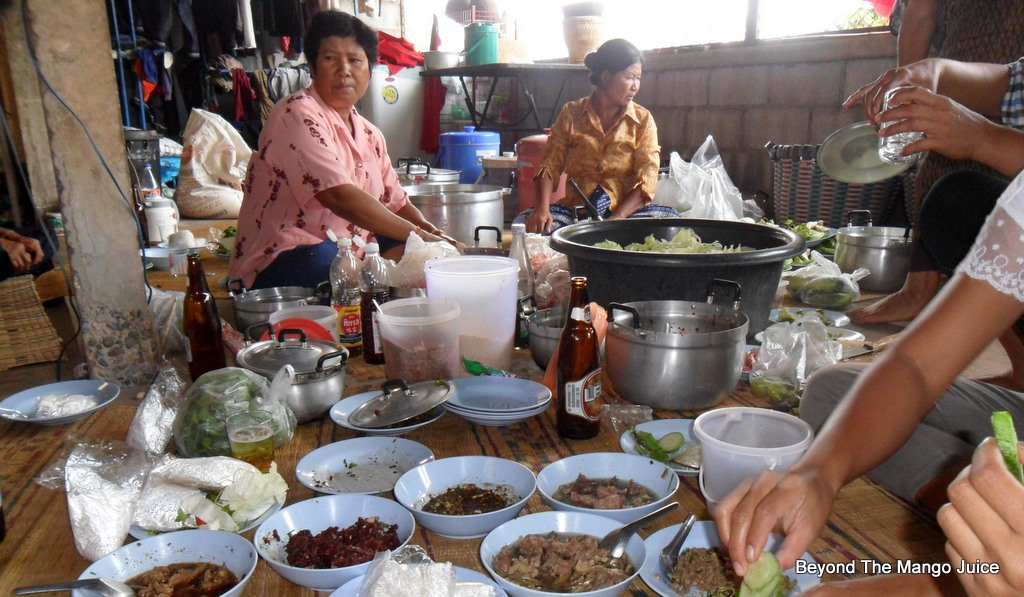 To the right of the house a huge canopied party area had been set up full with tables and chairs in readiness for the wedding celebratory food and drink. The food was being prepared at the back of the house whilst the wedding ceremony took place. There seemed to be just as much food getting consumed as there was being made ready. Beer was also flowing here too…Can do Thailand. 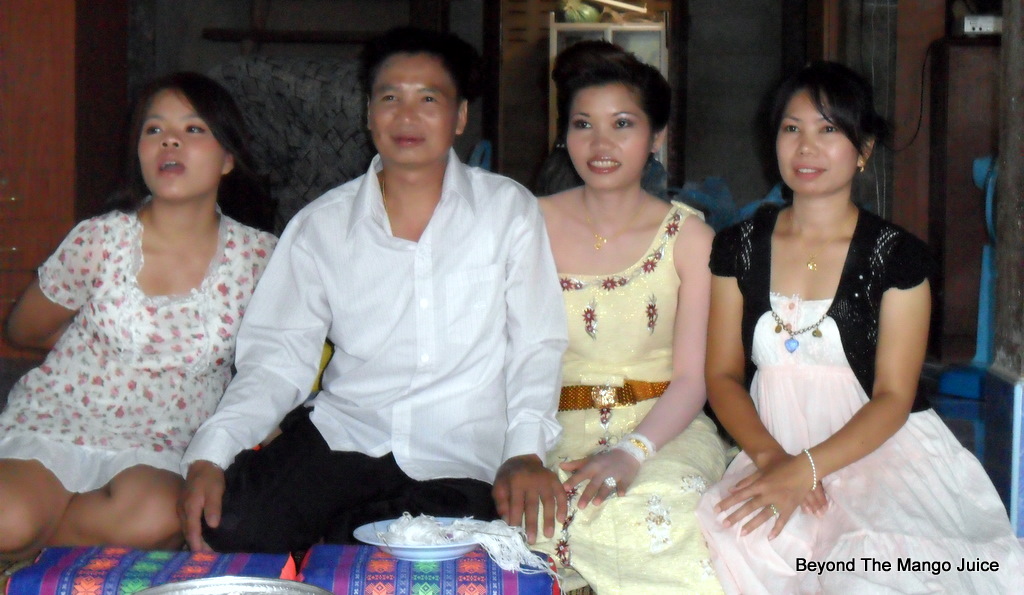 After the wedding ceremony the newly weds happily posed for pictures with family and friends. 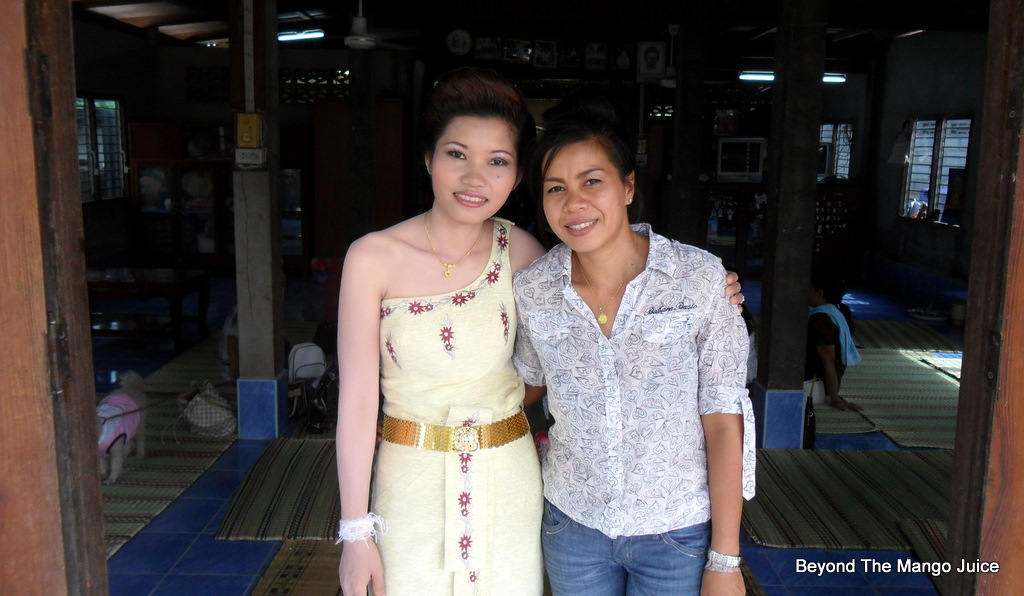 Old school friends together again once more. Noi and Wi pose outside the bride’s family home. One a newly wed and the other heading to Chiang Mai where she constantly kept looking at this picture and saying “Hus…band, me look dum dum (black) next to Noi. She look white mark mark”.

The cash till in Boots Pharmacy, Chiang Mai, sang a very hearty tune after selling a bucketful of skin whitening creams and lotions to a young woman from Isaan.

If you are planning to get married in Thailand or have a wedding to attend I hope your day is as enjoyable as the hour or so I spent at Noi’s wedding ceremony.