Beyond The Mango Juice and My 7 Links

My 7 links is a project hosted by travel company Tripbase and its aim is to link the world of bloggers via a chain of posts in which blog authors list their chosen links from seven different category questions.

Here’s how Tripbase explain the goal for their project:

To unite bloggers (from all sectors) in a joint endeavor to share lessons learned and create a bank of long but not forgotten blog posts that deserve to see the light of day again.

One of the rules (click to view) of the Tripbase project is that once you are nominated to take part and you have listed your seven chosen links you then have to nominate up to 5 more bloggers to take part.

Snap from Chiang Mai based blog Cooee nominated myself and Beyond The Mango Juice to pick up Tripbase’s blogging baton and I thank her for that honour.

Here we go with my 7 links in the categories listed by Tripbase. 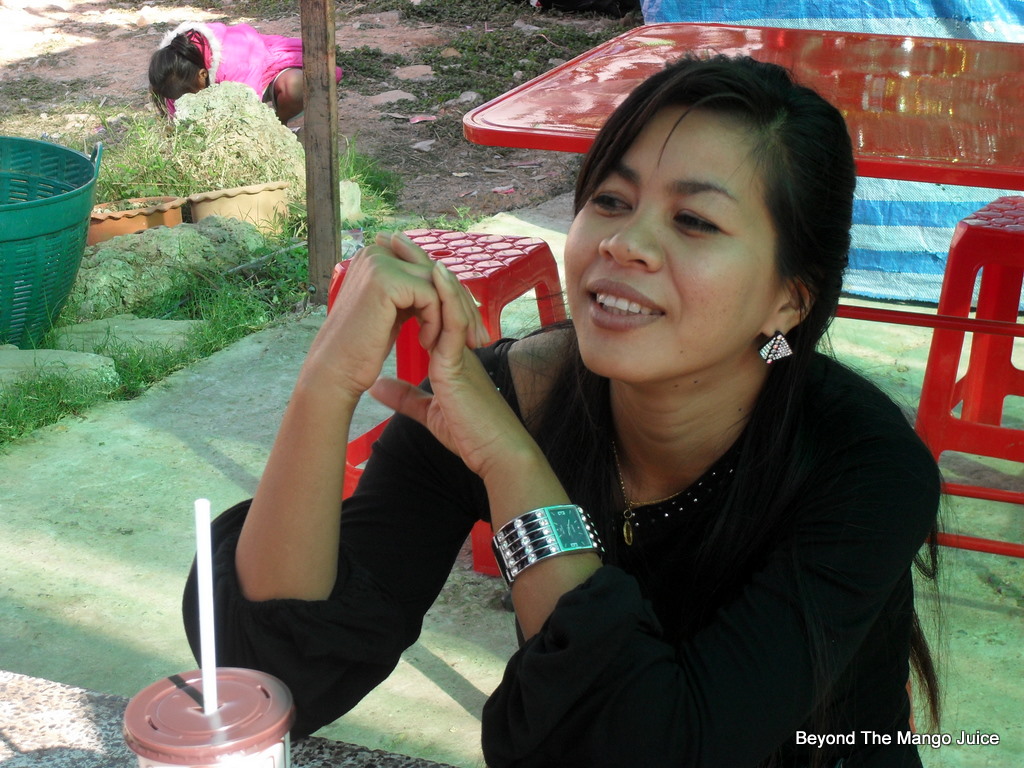 I had to think long and hard about this one but eventually I settled on a post I wrote way back in September 2009 titled My Girl – Chameleon. The post steals the lyrics from Boy George’s famous song Chameleon and in between those great song lyrics I give some background and bio to my Thai girl Wonderful Wi.

Boy George might sue me if he reads this one but Mills and Boon will sleep peacefully through the night knowing their tag as the world’s number one publisher of romantic stories is not about to be challenged.

I have a Most Popular Posts list in my sidebar but the ones at the very top of that list are without doubt only there because of their keyword search content. With that in mind I’m going to omit the top ten from my selection and go for a post which currently sits in the number 11 slot. Udon Thani’s Nutty Park is my review of a big bar area in the city and the post gets a good few hits each day and has proved to be very popular. Its popularity has even led to its content being stolen and posted on a couple of other sites. Luckily I’ve got the copyright to it. 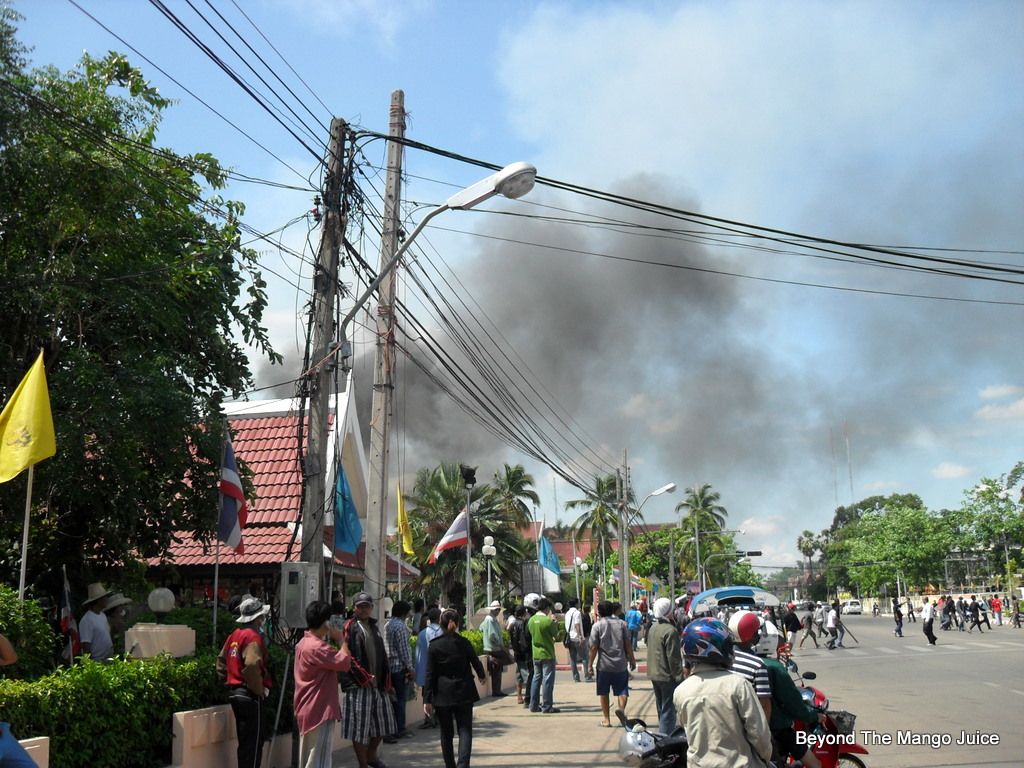 Beyond The Mango Juice is not a controversial site (in my opinion) and so this category had me scratching my head a bit. I cannot ever recall writing anything which has gotten anywhere near the dance floor of controversy but pick a post I must.

Last year during the Red Shirts uprising in Bangkok I was staying in Udon Thani city and when the UDD protests in Ratchaprasong (Bangkok) were brought to a close rioting broke out in Udon Thani. I headed straight to the scene of the action with my camera primed and ready to roll. On the Scene – Udon Thani Burning is a post which I’ve often wondered if I should have ever gotten involved in at all.

This one is easy because statistics generally speak for themselves and a very recent article I wrote titled How Much Money Do You Need to Spend in Thailand is getting regular hits each day from visitors who want to know the answer to the post’s question. 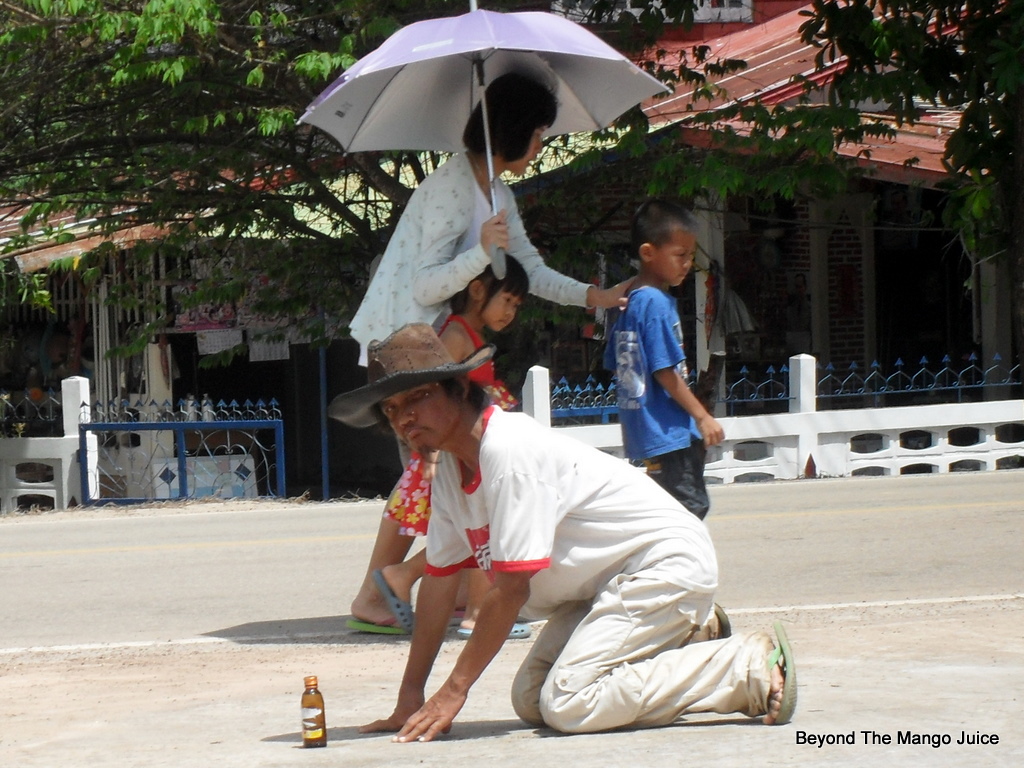 I think trying to solve a Rubik Cube whilst juggling chalk and cheese would be far easier than answering some of these category questions, but here I go again.

I wrote a post called 100% Proof – Lao Khao is a Knockout Drink which recalled a barbecue Wilai and I attended at her aunt’s home in Nong Khai. A very drunk man turned up at the house and even now my tale of that day still gets quite a few hits and its long lasting popularity does surprise me. I think it has some classic ‘drunk’ photographs attached to it.

Post you feel didn’t get the attention it deserved

Ban Gerda and Living With the Tiger is the story of HIV infected orphans living in a Thai village called Baan Gerda. The post explains how they are trying to rebuild their lives with the help of a documentary which plots their zest for life and musical talents.

I hoped my story about the orphans of Baan Gerda would help educate people to the good work being carried out at the HIV orphanage and to hopefully raise money for a very good cause, but after initial good hits to the post it now receives very little at all. My disappointment is not for me but for the wonderful kids at Baan Gerda.

I have written a lot of crap on Beyond The Mango Juice during its near three years of publication but I like to think most of my rubbish hit the net during its early days. However the post I’m probably most proud of is one of the very first ones I wrote.

The Beginning Part Two is about the first time my old buddy Tom and myself visited Thailand. It was a place we weren’t meant to be because after a good few drinks in our local bar in England we grabbed our passports and headed to Heathrow airport, London. We sobered up on a British Airways Bangkok bound flight and realised to our horror we were heading to a country we knew very little about.

I have slightly tweaked the post twice since its first airing and the last of those was in honour of Tom who passed away in May last year. This One’s For You Bud is all about me and Tom’s very first day in the Land of Smiles. I do sometimes read this one myself and each time it stirs different emotions in me. It brings joy, laughter, great memories and sometimes a lump to my throat. If Tom reads this I’d like to say to him, ‘ I hope you’re doing okay up there and The Lord isn’t getting too big a beer belly knocking about with you’.

That’s My 7 links and I hope you enjoy reading one or two of them.

I would like to nominate the following five blog authors to take on Tripbase’s blog baton.

Graham author of Adullamite – A Scotsman living in England who has a cynical and whimsical outlook to life.

Mike from Thailand Blogs – The author of the Information Station of Thailand is a talented writer with great depth and diversity to his musings and travel reviews.

Malcolm host of Retired in Thailand and Loving It – Stories from Kanchanaburi delivered straight from a hammock with a passion for life in Thailand.

Lawrence, eBook author and the man behind Thai Life in Phana which puts the spotlight on rural Isaan and covers everything you need to know about country life in Thailand.