There is both high quality writing and a variety of subject matter in the 15 posts which make up the contents of my Thailand Blogs – June 2011 Review. Thailand’s July election, the Laguna Phuket International Marathon, volunteer teaching in Thailand and black sheep are just some of the diverse topics included. However I have deviated from my normal review format by finishing this post with a blog which dates back to March this year. I hope that has intrigued you enough to read all the way through this review because that last post is worth it.

All photographs included in this month’s review were taken in Wonderful Wi’s village in May during the village’s three-day Bang Fai Rocket Festival celebrations.

My Thailand blogs June review starts in Pattaya with the penultimate post in Thailand, Land of Smiles great series Living Like a Thai. Talen was attempting to survive the whole month of June by living Thai style on 200 baht a day and Living Like a Thai Day 23: Put a Fork in it…I’m Done has a clue to the conclusion of Talen’s experiment in its title. Things were going so well until…..if the post title has teased your taste buds and tickled your tonsils then click on the link and find out what went wrong down in Pattaya. 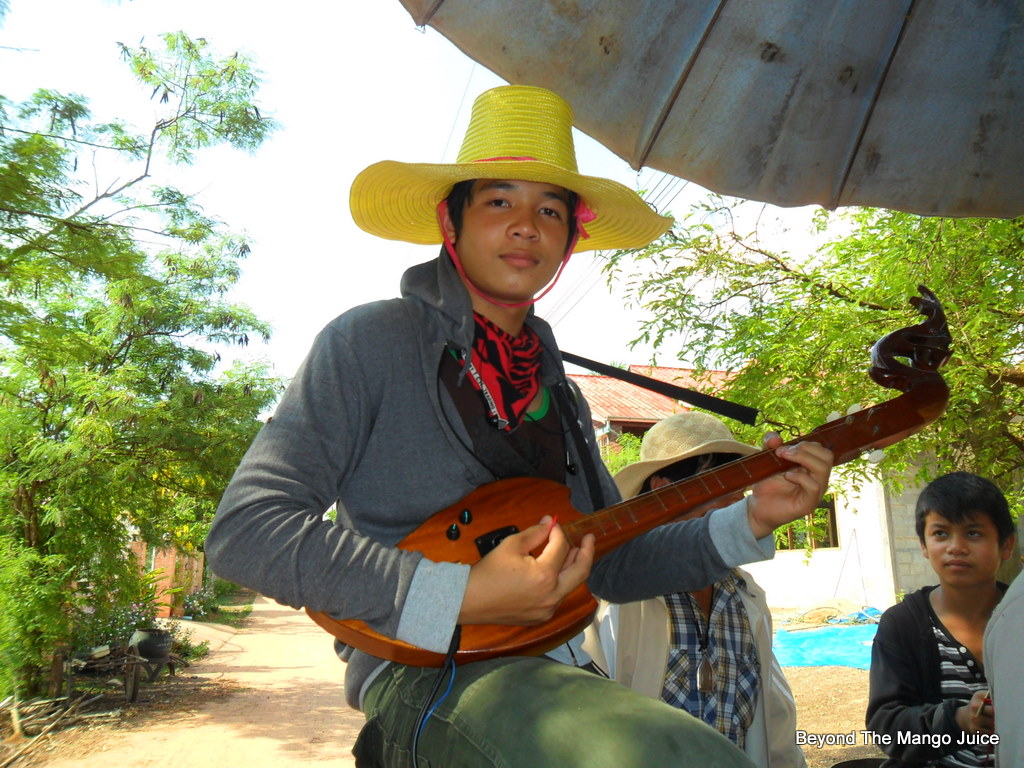 If you’ve ever watched Thai TV soaps then you’ve probably been bemused and amused by their ‘same same’ storylines and tame acting. Thailand Musings guest blogger Angella has written a post which turns the tables and puts a high heel on the other foot. A Thai woman’s shock with western Reality TV provides a look through Thai girl Angella’s eyes at the openness and frankness of western reality TV and how those two TV traits make for such shocking yet compelling viewing for many Thais.

Another guest post is aired at Thailand Blogs when Dan Ogilvie slots into the guest blog role and pens a beautifully written post titled Give your Heart to Thailand. Dan writes about his love of Thailand and how despite the country lacking in the trappings and luxuries which more ‘grandeur’ western countries like Canada, America and the United Kingdom supposedly have, a sheer love for a place and the feel of being at home there far outweighs the welfare benefits and glossy, cellophane wrapped surroundings of western suburbia.

Paul Garrigan.com recounts the joys of riding a motorbike through Thailand’s Isaan mountains laden down with so much supermarket shopping the local Thais couldn’t help but stop and stare at the mad farang on his motorbike. Paul and his Honda Wave made many happy journeys together but that all changed when he and his family upped roots and moved nearer to Bangkok which prompted Paul to buy a car. The Forgotten Joys of Riding a Motorbike in Thailand is Paul’s memories of having wind in his hair and feeling carefree riding his motorbike around rural Isaan. 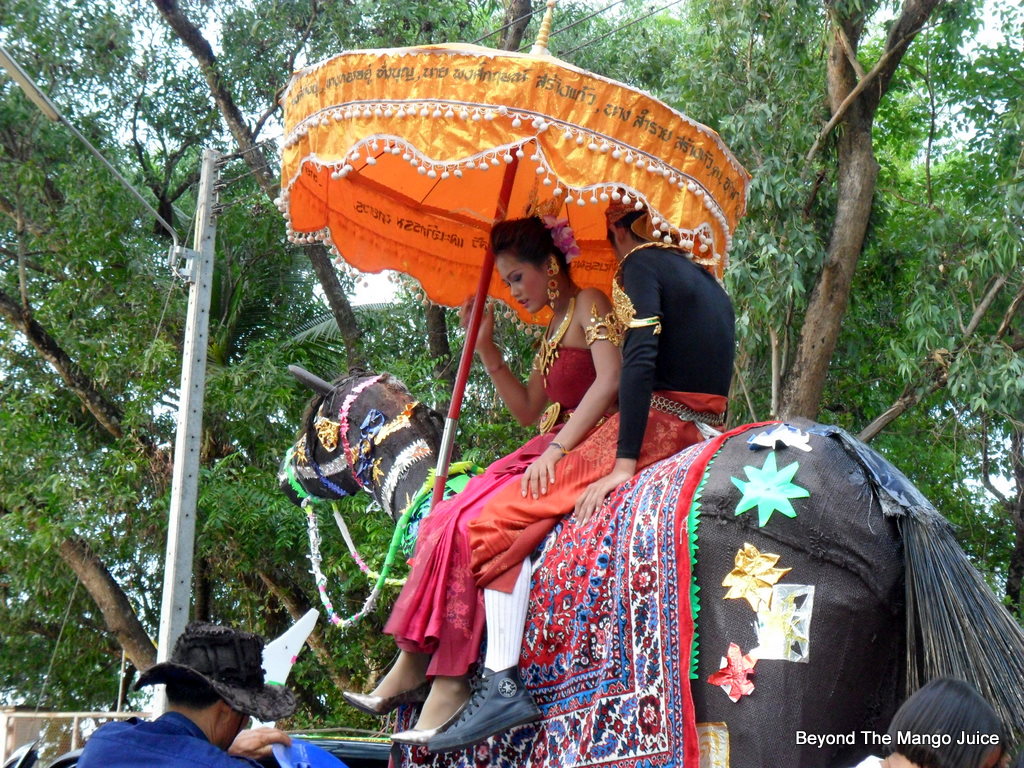 Johnny Foreigner was back in June after a self-imposed break from blogging. A dose of inspiration for Thai learners is all about getting to grips with the Thai language and Jon places a strong emphasis on learning to read and write Thai from the beginning. Jon’s post also includes three videos from a gang of farang comedians who act out comedy sketches in Thai.

If you’ve ever considered becoming an English teacher in Thailand then jump on the school bus and head over to Snap’s blog Cooee. Snap’s husband Stray is teaching for a not for profit organisation which offers language and arts programs to Burmese refugees. Snap’s post Volunteer English Teaching and Learning Thai has some great photographs of Stray and the kids having fun in the classroom. There are lots of Burmese smiles in the photos and a big beaming Australian one too.

Walking two or three kilometres in Thailand can bring you out in a hot sweat and running a marathon is absolutely unthinkable except for mad dogs and ….. Dutchmen.

Koh Samui’s superfit Camille Lemmens has lived on the island for many years and works as a  PADI Course Director (scuba diving instructor trainer), and last month he hopped islands and took part in the Laguna Phuket International Marathon; Race day raising money for Project Aware, a global force of divers mobilizing to protect the ocean planet in more than 180 countries and territories. Camille completed the 20 kilometre course in a staggering two hours four minutes and I can only assume having run the race that fast he must have had a mad dog chasing him the whole way. The post on Camille’s Samui Info blog includes two very different ‘before and after’ race day pictures of Camille. Well done superman.

Ben Shillington, aka The Thai Pirate, lays down on the psychiatrists couch and jots down his own personal thoughts on an ‘animal’ even Thais wouldn’t dare eat. The black sheep of the family. Many westerners married to Thai partners end up with a black sheep brother-in-law and Ben analyses the reasons why the bad boy of the family turns out so. The Infamous ‘Thai brother-in-law’. Thoughts has Ben switching from his normal jocular writing mode to a more studious one. 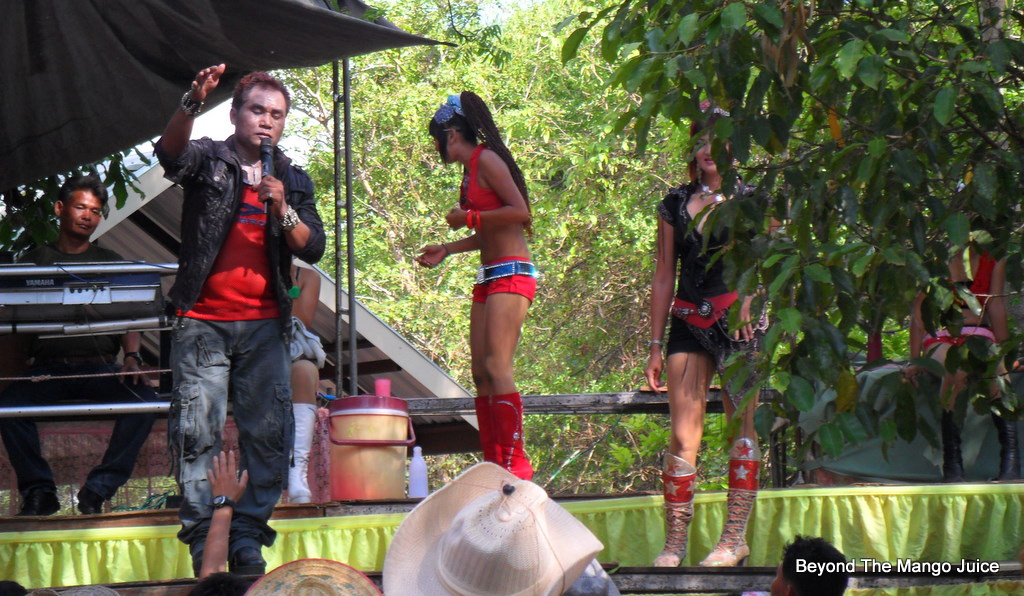 Building a Hut on forestry land at the foot of a mountain in Thailand may sound appealing to many of you but for me it would be a big no-no. I’d be too worried about snakes and things which ‘growl’ in the night. For Thais it’s a dream come true. One of Malcolm’s Thai friends starts building a small thatched hut with a balcony in woods not too far from Wang Pho village and Malcolm grabs his camera and follows events to witness a pile of logs being transformed into a quaint weekend retreat for a man and his dogs. Grab your rucksack and sleeping bag and trample down the long grass on your route to Retired in Thailand and Loving It.

June saw Thailand edging ever closer to its July elections and Catherine Wentworth and Women Learning Thai…and some men too got in on the act with a superbly written post titled Thai Politician Chuwit Kamolvisit: A Man. His Dog. Their Park. Thai politician Chuwit Kamolvisit’s election strategy was based heavily on a Bangkok poster campaign which promoted Chuwit as the man to tackle corruption in Thailand and essentially Thai politics. Chuwit himself was once the country’s biggest massage parlor owner with a flourishing empire in Bangkok. Catherine heads off to Chuwit’s election headquarters, meets his campaign poster bull terrier dog Motomoto and visits Chuvit Garden Park, now a public park created by Chuwit in 2006 but formerly the home of his nightlife business empire. This one’s an excellent read and contains many Thai language phrases with English translation. 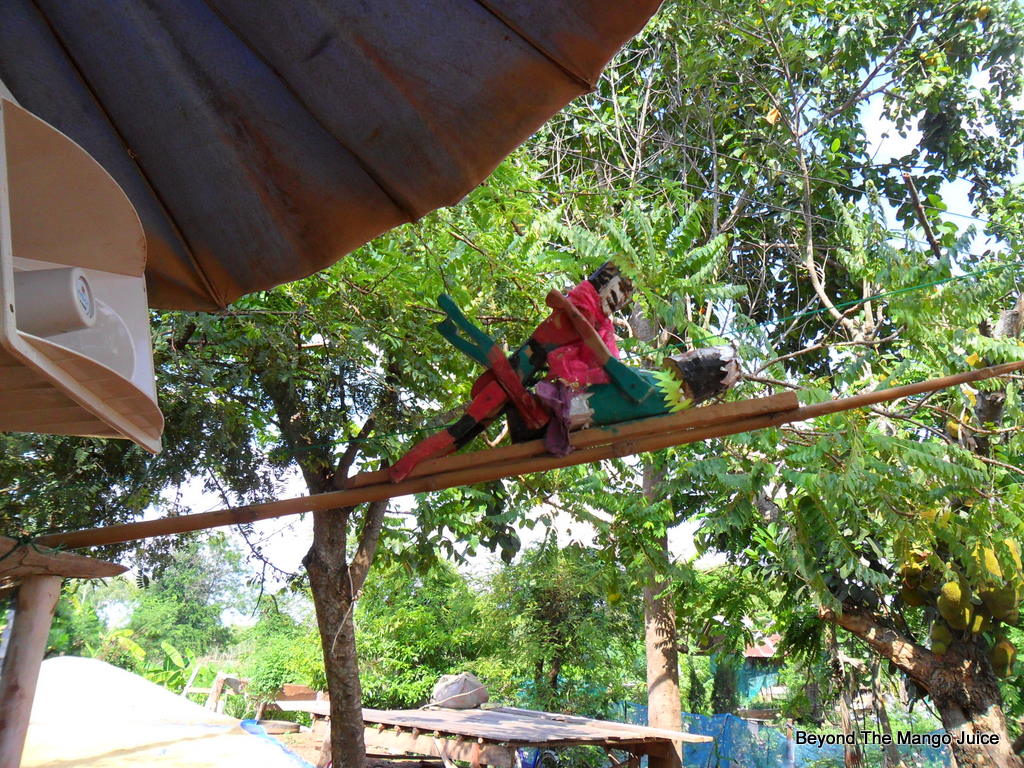 MeMock returned to Australia with his family earlier this year and last month a stork carrying a baby explained the reasons for their departure from Ubon Ratchathani. On June 22 MeMock’s wife Seerung gave birth to a bouncing bonny boy and newly born Jacob weighed into the world at a healthy eight pounds. Life in rural Thailand has pictures of young Jacob in its post Another little MeMock is born. Congratulations to Seerung and Andrew (MeMock). The photograph on the left has a strong connection to MeMock’s post.

Politics is banned in Isan from Thai Life in Phana is a story which lightly touches on the subject of Thailand’s July election. An Isaan man has banned all talk of politics on his farm and Lawrence visits it to chat about anything but politics and to take a few pictures of the dragon fruit orchard and the splendid weekend hideaway home that has been built there. Lawrence parks his bicycle and guides us through a tour of a place which looks an ideal setting for a late afternoon barbecue and a few cold beers.

Siam Rick resists a short cut to the nearest hair salon, avoids the back street barbers and sides with both Thais and tourists by taking a trip to an air con shopping mall where he decides to get his ears lowered. Rick ignores a friend’s recommendation to get his haircut for a whopping 1,000 baht at a plush Bangkok salon and instead opts for an express cut at a pay as you go barbers booth in Metro Mall. The 100 baht haircut that will last a lifetime is my June selection from Behind the Noodle curtain.

My pick from Beyond The Mango Juice for last month goes to a post which gives an overview of my first impressions of Thailand’s second largest city, Chiang Mai, which Wilai and I visited in May. First Time in Chiang Mai is my humble review of a city steeped in cultural history and one which brings me nicely on to that promised post from March.

Frogblog Thaidings is one of the best Thai based blogs I have ever read but due to personal reasons its author Peter Garwood hadn’t to my knowledge posted on his site since December 2009. A couple of days ago I visited Peter’s blog and discovered the Frogblogger had published a story in March this year. Global travel on the cheap? is the article and any readers who haven’t viewed Peter’s blog before then this post is a perfect example of the man’s polished writing style. I’m sure many of my fellow Thai bloggers may have missed the post as well and I’m equally as sure they’ll want to read it too, and hope the Frogblogger’s next post is visible on the horizon. I know Peter’s stories about Chiang Mai and Thailand have been missed by many people.