Thailand Election Day – Has Yingluck Shinawatra Got the X Factor

Tomorrow morning Thailand heads to the election polls as the country bids to put an end to the political unrest which has divided the Kingdom’s citizens over the past few years. There are forty-two parties contesting the July 3 election but in reality the winner will come from a straight fight between the ruling Democrat Party and the Thaksin Shinawatra controlled Puea Thai Party (For Thais Party)  headed by Thaksin’s youngest sister Yingluck Shinawatra.

In the days leading up to election day I’ve been digging around the internet to find out some background to the 44-year-old businesswoman who is bidding to become Thailand’s first ever female prime minister. 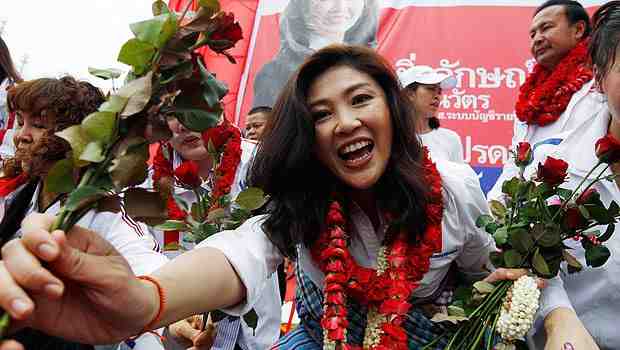 Yingluck Shinawatra
If beauty alone was the sole quality to choose the winner of Thailand’s general election then Thai women might argue current Thai prime minister Abhisit Vejjajiva would be the clear winner. However ‘Handsome Abhisit’ has been upstaged on the election trail by a lady who is very beautiful to the eye, Yingluck Shinawatra has turned heads and melted hearts on her election campaign throughout Thailand. 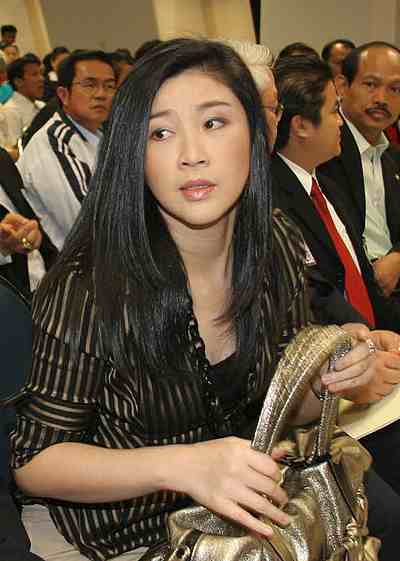 Yingluck was born in San Kamphaeng District, in Chiang Mai Province on 21 June 1967 and is one of nine children and youngest sister to Thailand’s former prime minister Thaksin Shinawatra who was ousted from office in a military coup in 2006. Thaksin is now living in exile in Dubai after fleeing Thailand in 2008 when facing a Supreme Court trial on corruption related charges over a dubious land deal.

After graduating from Kentucky State University, Yingluck returned to Thailand to take a lead role in the running of Thaksin’s huge telecommunications empire. Since those early city business days she has continued working in Bangkok and is currently president of Bangkok-based property developer SC Asset Corp which is controlled by Thaksin’s children. However her entrance into Thai politics as the Puea Thai’s number one party-list candidate seemed to be more of a decision made by her brother than herself. Previously she had voiced her reluctance to step onto Thailand’s big political stage. Big Brother convinced her she has the X Factor and a one way ticket back to Thailand for a man in exile.

Since her nomination to head Peau Thai’s election campaign Yingluck has travelled the length and breadth of Thailand with great success and tomorrow evening she is a red-hot favourite to win at the polls and become Thailand’s first woman prime minister.

Yingluck lives in Bangkok with her common-law-husband Anusorn Amornchat and son Supasek is their only child.

Whether Yingluck has the X Factor to win Thailand’s general election remains to be seen but opinions polls suggest the Chiang Mai born ‘beauty with brains’ already has one high heel in office. She’s been called a ‘Thaksin clone’ and ‘Thaksin in a frock’, and her brother’s route back to Thailand via an amnesty for those guilty of recent politically related offences, but come Sunday evening Yingluck Shinawatra could well be named as Thailand’s 28th prime minister and the first lady to hold office.

Puea Thai’s PR team have squeezed every last drop of mileage out of Yingluck’s charismatic smile and good looks, plus their campaign promises which include welfare benefits for senior citizens, universal medical care and credit cards for farmers have helped to win over many doubters. Despite those enticing promises their winning hand could very well be the beautifully and elegantly manicured promotion of the youngest sister of Thaksin Shinawatra as the saviour of the common people.

I found this quip on the internet from Thai historian Chris Baker which perhaps best explains how the majority of Thais see the differences in the two major political parties. Baker was merely commenting on Yingluck’s hair.

“It’s long, lush and sensuous. It’s been lifted a little at the peak with gel, and swept at the tips … in contrast to the clipped, sprayed and regimented bonnets of senior bureaucrats and army wives.”

Here in the UK it is Wimbledon finals weekend and I’d say putting Baker’s observation into a political context makes it game, set and match to Yingluck and the Puea Thai Party.

Good luck to each party involved in Sunday’s elections.

Photographs used in this post are believed to be in the public domain.