My First Time in Chiang Mai in Pictures

Like most Thailand bloggers I have a large database of photographs from different regions of the Kingdom most of which will never see the light of day. For every one hundred pictures I take I would doubt if even five of them make it to a post on Beyond The Mango Juice.

On my last holiday to Thailand in May this year Wonderful Wi and I visited Chiang Mai for the first time and whilst in Northern Thailand’s cultural city and encompassing province I captured over four hundred images for memories sake. For this post I thought I’d share some of those unpublished photographs with readers alongside one I’ve posted before. Not all of the pictures show the glamour of Chiang Mai but more a city waking up, going about its everyday life and also a few photos which captured my inquisitive mind and imagination. 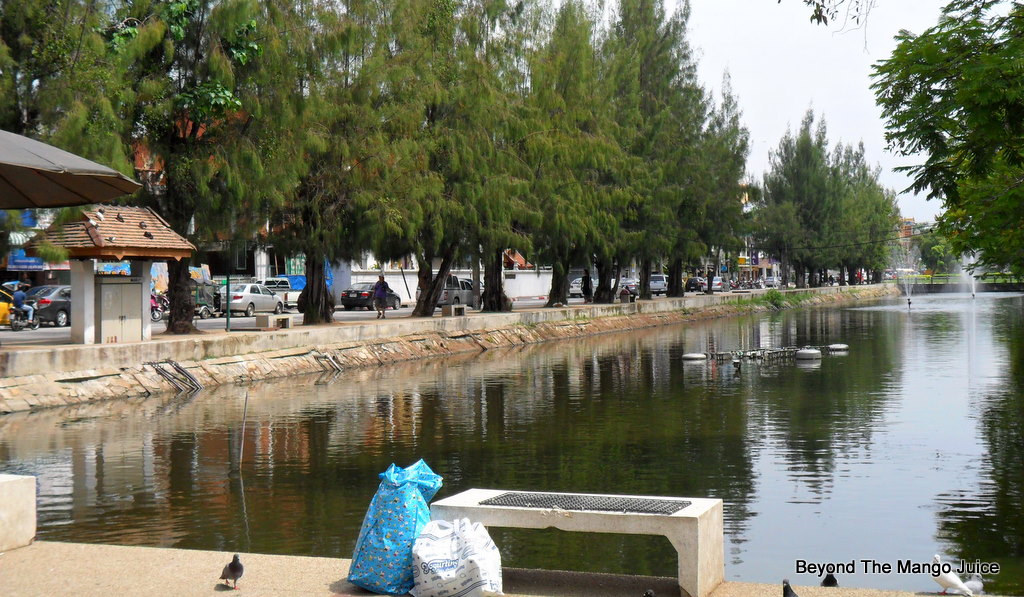 The moat which surrounds Chiang Mai’s old city. I think it sums up the serenity of a city which appeared to calmly amble through its day. 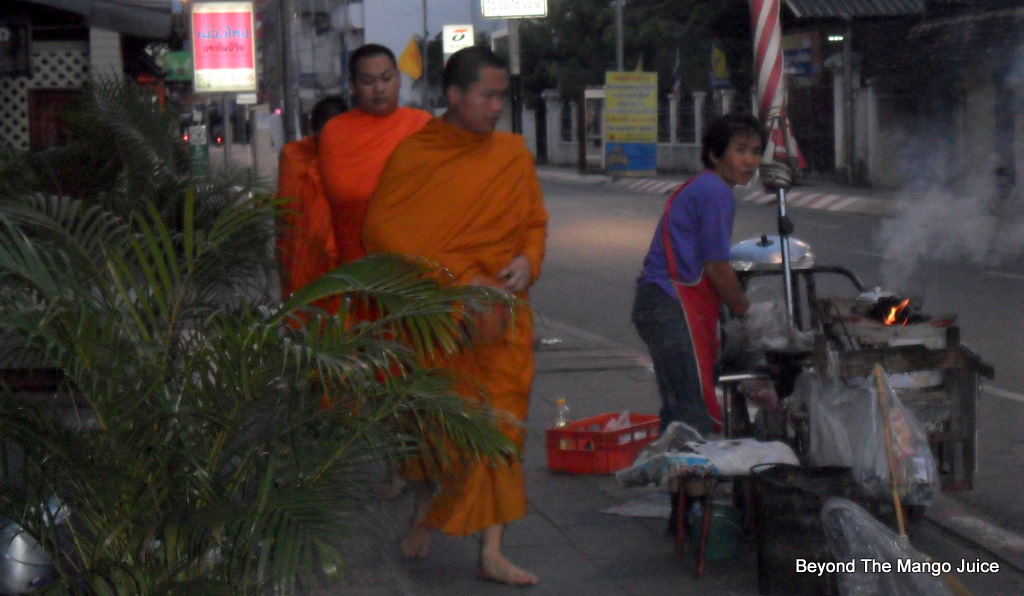 A Chiang Mai lady stokes the first fires of her business day as the city starts to wake up at six in the morning. Onlooking monks return to Wat Bupparam from their alms rounds. 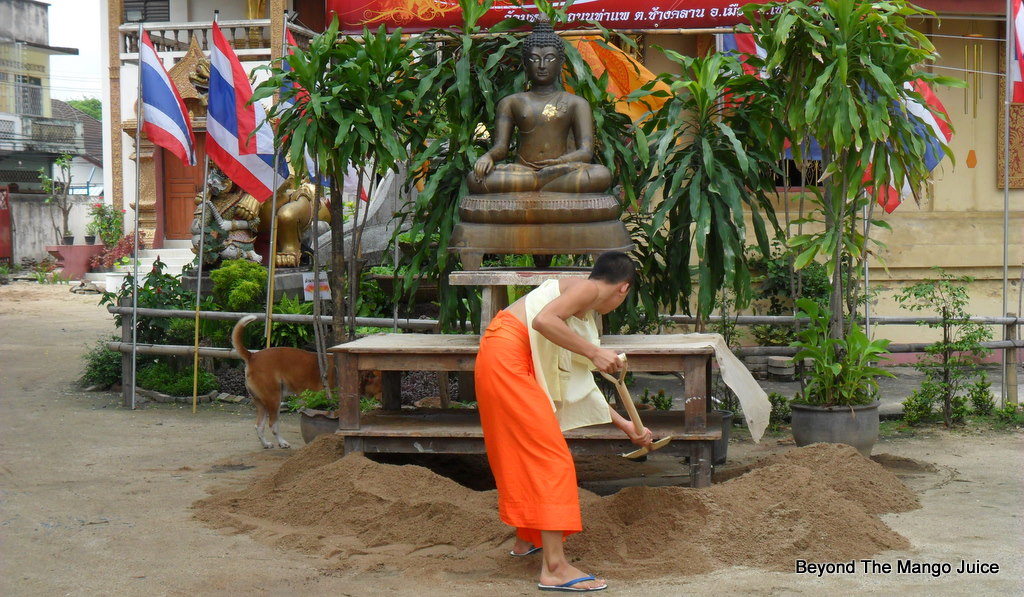 After their morning alms round some monks have more strenuous work to do in the numerous temples of Chiang Mai. 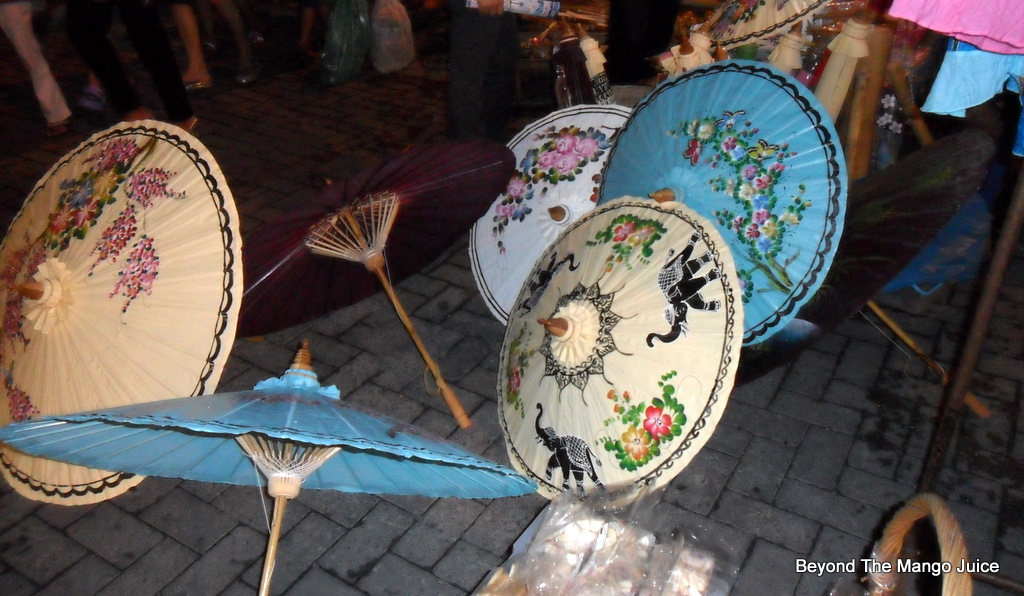 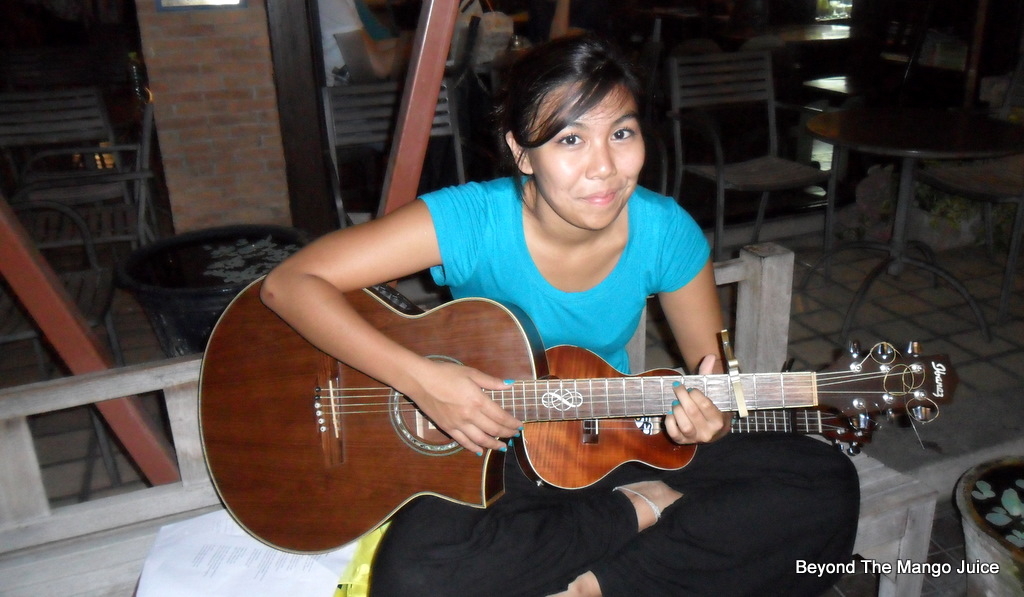 One of the many musicians performing at Walking Street Night Market. A girl’s nails must match the colour of her top. 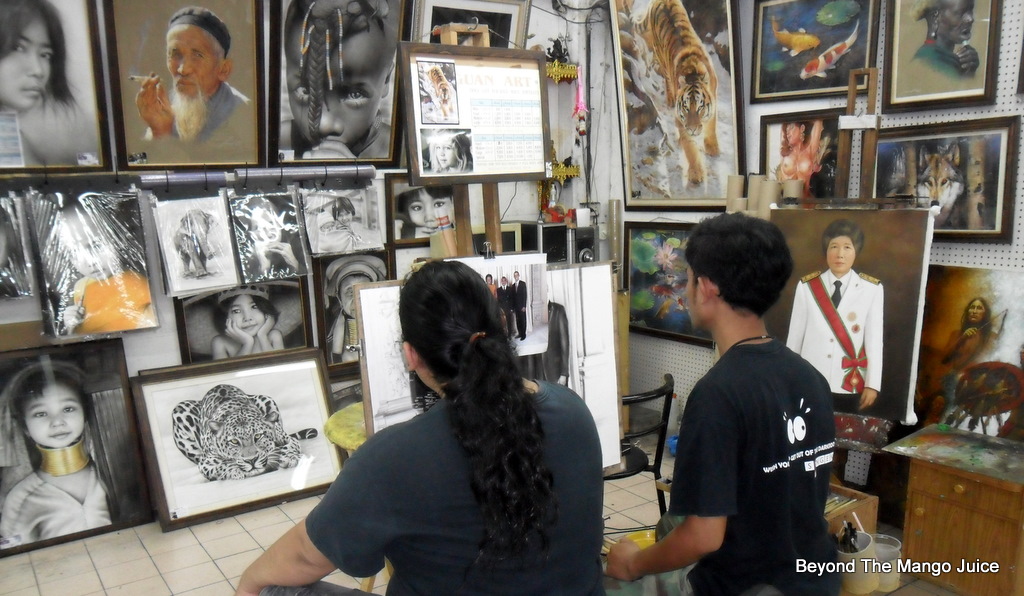 Artists put their skills to work at Chiang Mai’s Night Bazaar. They were amazing to watch. 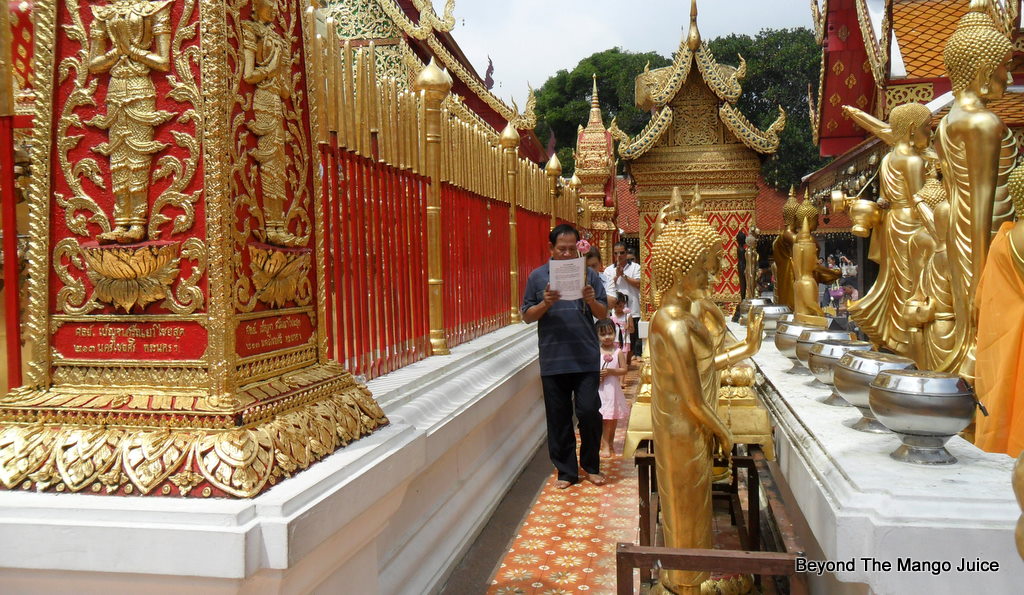 Chiang Mai’s most famous temple Wat Doi Suthep sits atop a mountain 15 kilometres outside the city. In this photo a procession of Buddhists circle the temple’s chedi three times in a clockwise direction carrying flowers, joss sticks and prayer sheets. 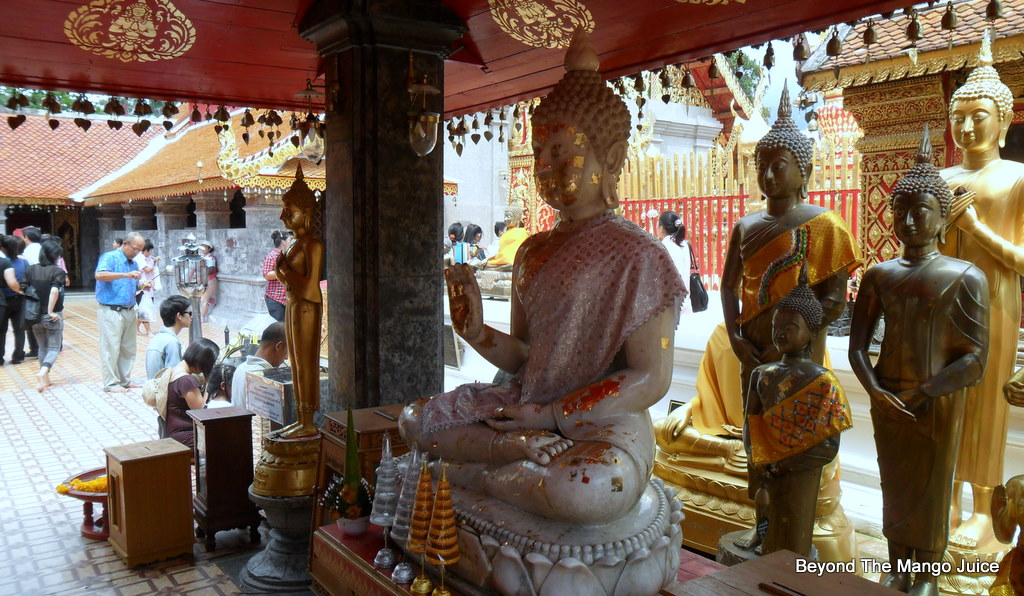 Buddha statues at Wat Doi Suthep. Every which way you turned on the temple grounds the view warranted a click or two from your camera. 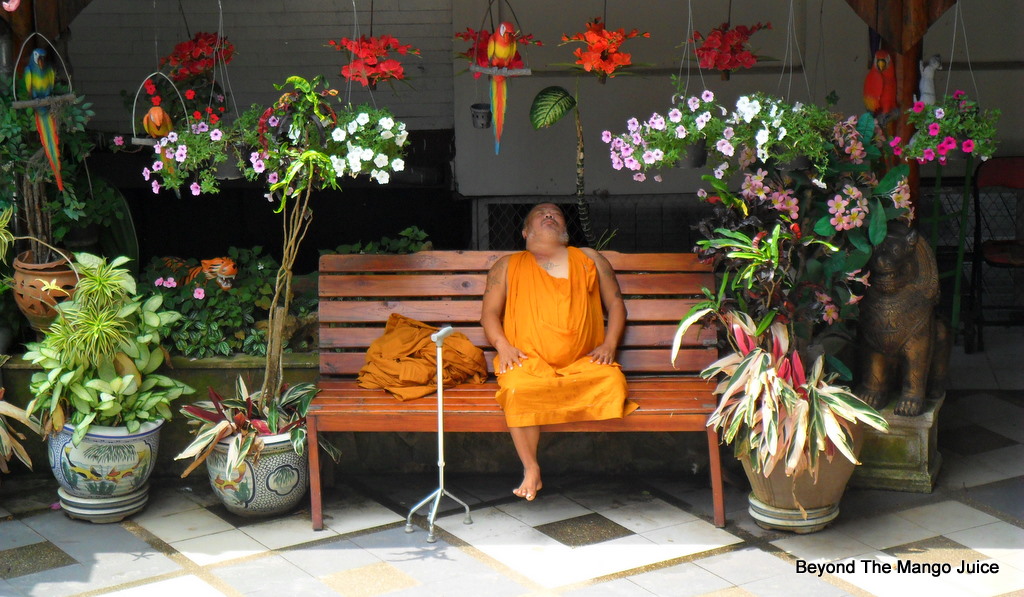 A one-legged monk idles the afternoon away against a backdrop of every colour of the rainbow and a few more. 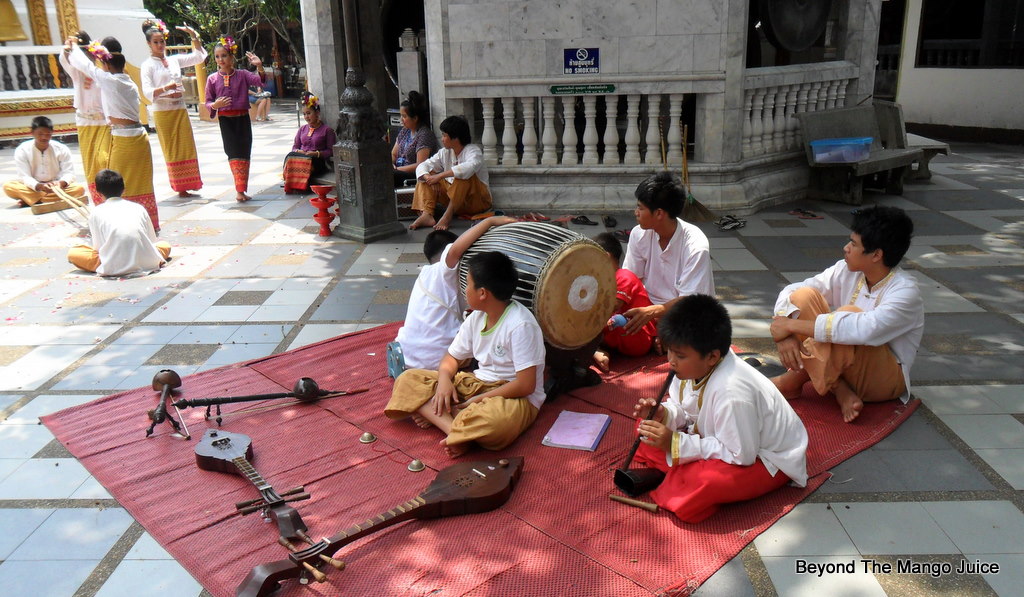 Aside from the magnificent temple and chedi there were performing dancers and musicians in traditional costume. 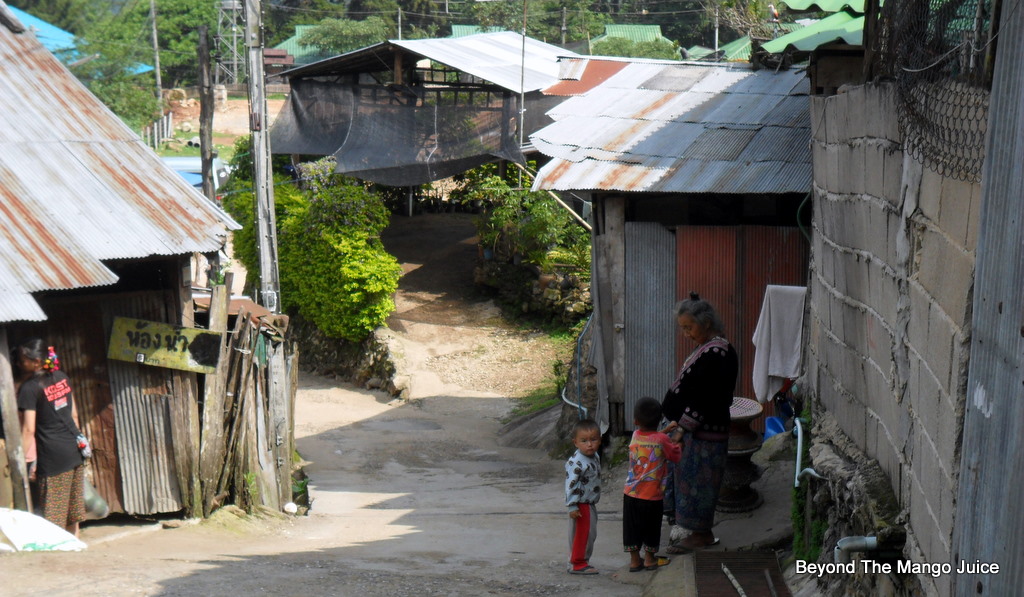 I took this picture at Ban Mong Doi Pui where we visited a Hmong market and I took a walk down one of its side streets into the village itself.

An old lady, perhaps the two children’s grandmother, appears to be giving the two kids a bit of advice about life. Maybe she was telling them that if they went to school every day and listened and learned, then one day they would be able to buy a shiny camera like the westerner had. She might also have added that if they ever bleached their hair blonde like the farang, they’d be in big trouble with grandma. 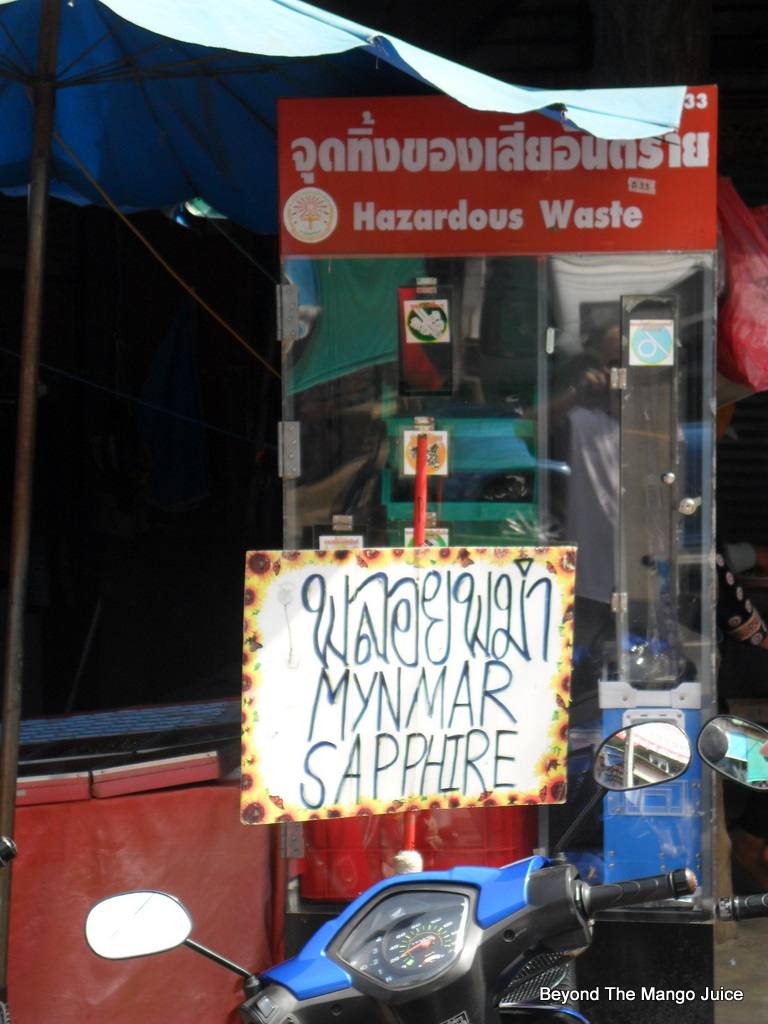 I couldn’t resist posting this picture I captured at Doi Pui market. Take a closer look at the photograph. Myanmar sapphires were on sale here but thankfully I resisted the temptation to buy some of the brightly coloured gemstones because behind them was a dumping point for hazardous waste. Click to enlarge.

Call me cynical but if I am going to buy precious stones in Thailand then I’ll buy them from a reputable Bangkok dealer and not from a motorbike basket halfway up a mountain in Chiang Mai. Even Wilai failed to give these a second glance. I think it’s a gem of a picture. 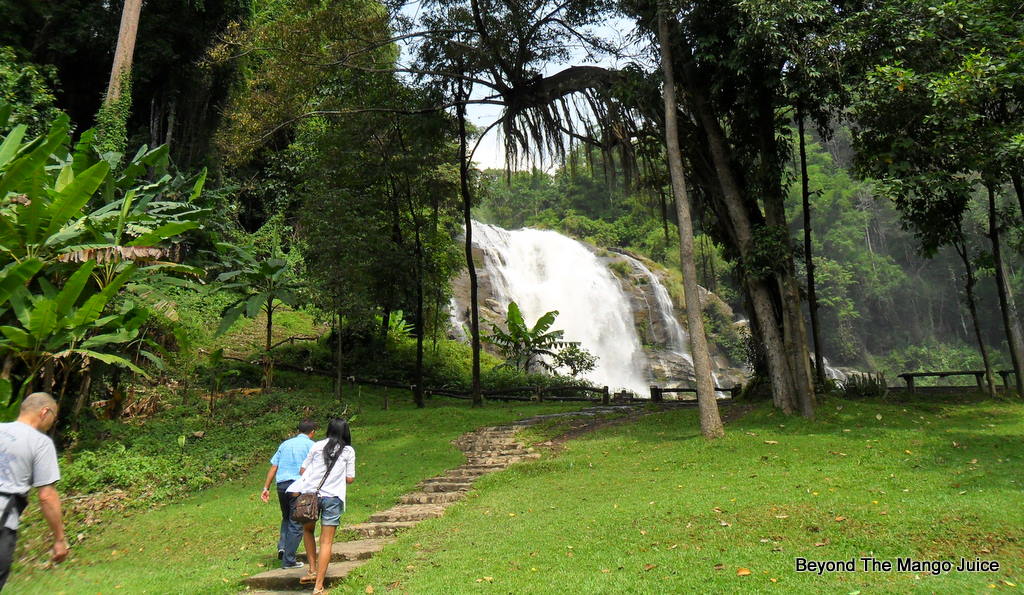 Wachirathan Waterfall. Green grass and thunderous free-flowing water nestled together in the cupped hand of a vibrant sprawling forest. 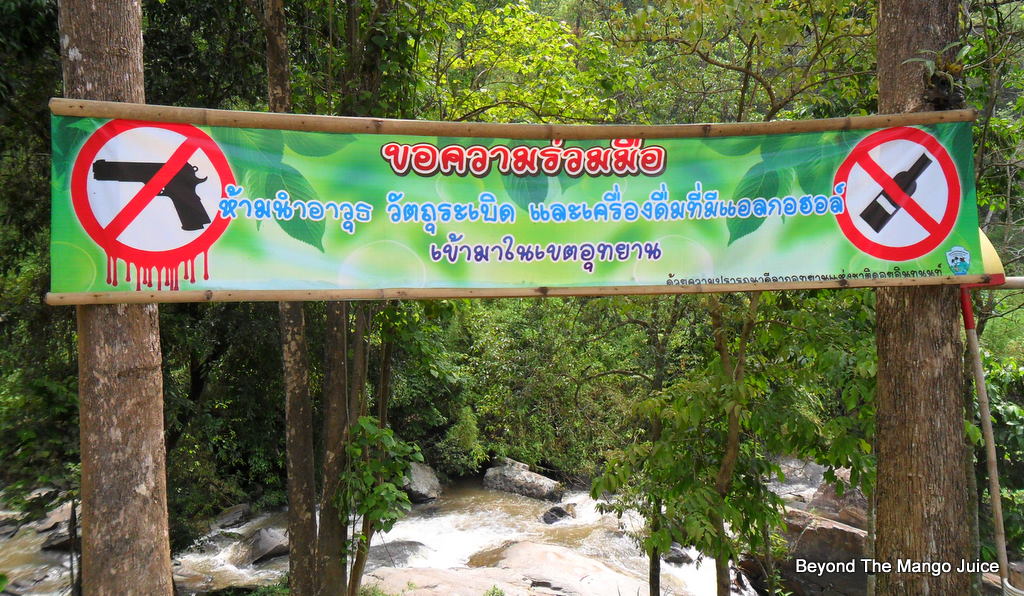