Thai Travel – Sardines in a Can 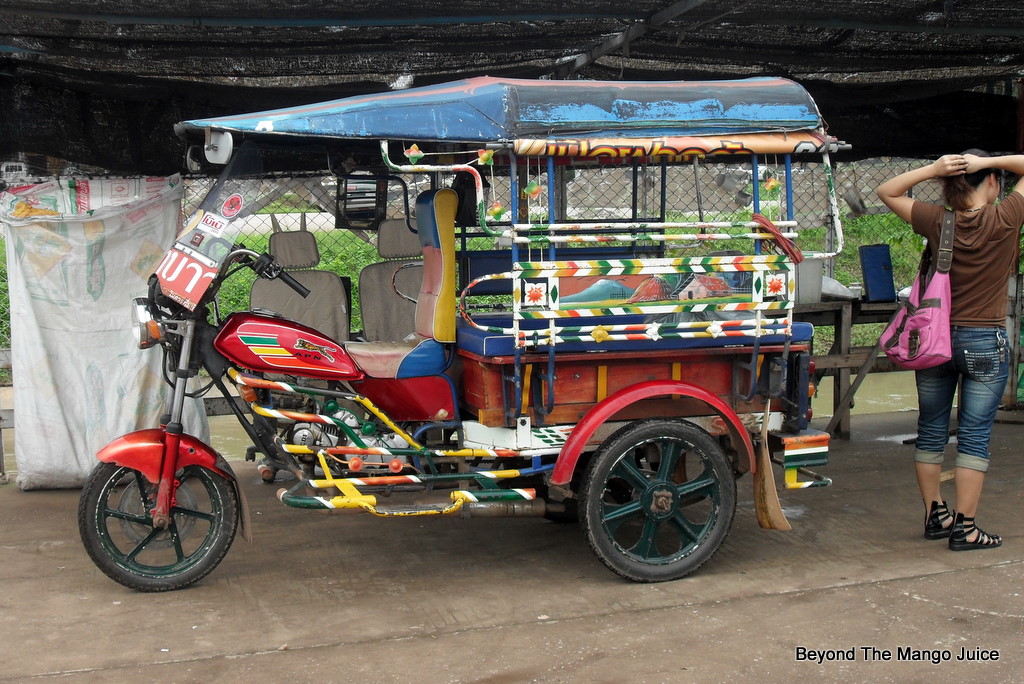 As one becomes older and wiser we have a tendency to be more careful with our money and I think that’s a true statement for every culture, country and walk of life. And Thailand is a country and culture which is living proof of that.

Travel is one aspect of life where being frugal and economic pays dividends in saving money for certain things we feel we can’t do without. If that wasn’t true then every aeroplane would be three-quarters full of large spacious seats and there would be a small economy section at the rear. 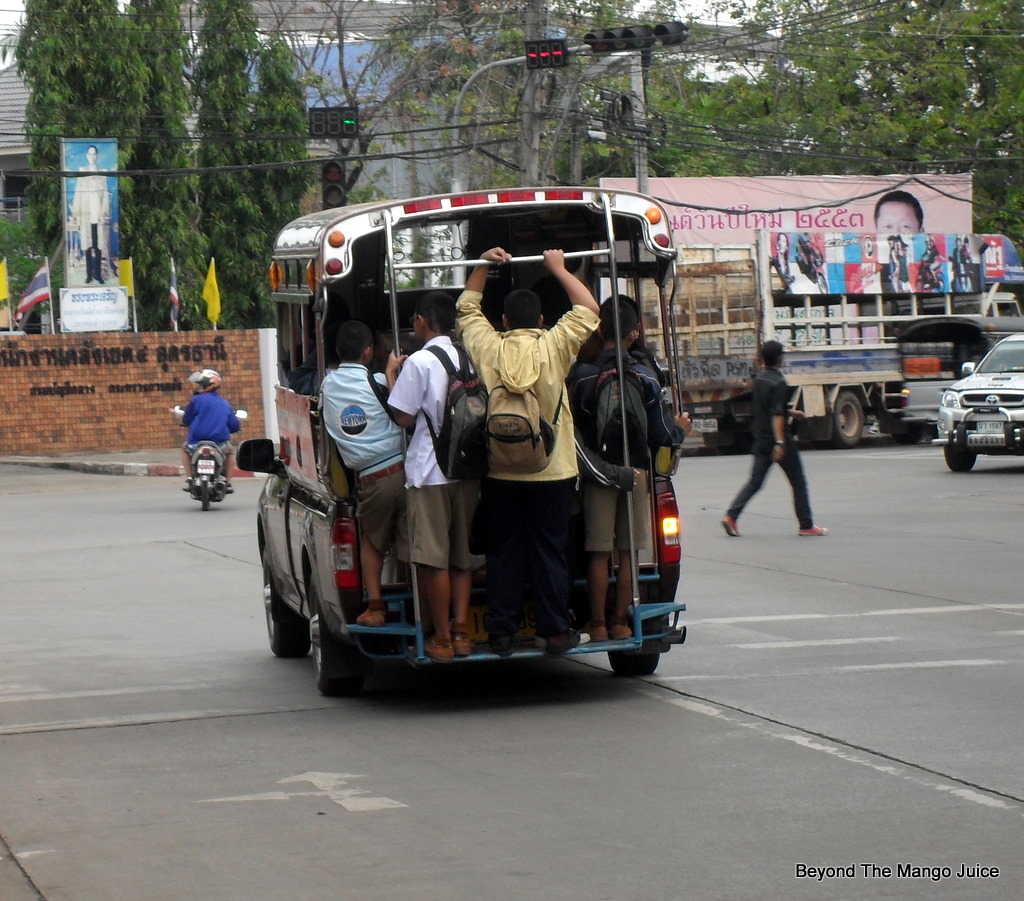 The favoured form of public transport in Thailand’s cities and towns is a songthaew bus which is pictured on the right.

Songthaews have a bench on either side and when they are full the middle aisle is used for passengers to squeeze into. Anyone else wishing to board from then onwards has the choice of hanging on at the back or waiting for a less crowded bus to arrive. A two kilometre songthaew ride can cost as little as 10-15 Thai baht (30-50 US cents).

The top photograph is a samlor (three wheel) vehicle in Udon Thani city and at a push it can comfortably fit four average size people inside. If one has a liking for calories then that comfort zone falls from four to three.

Samlors in Udon Thani are used as a more private form of transport in comparison to songthaews but their fare is considerably higher. It’s a price which is still cheap to foreign tourists but a touch weighty for ordinary Thais. A two kilometre samlor ride will cost anything between 40-80 Thai baht. Thais are liable to pay the lower end of that scale and foreigners the top. If you can cram as many friends and family as possible into one samlor then splitting the fare can make the journey a cheaper one than travelling by songthaew.

Over the past few years I’ve developed a fascination with capturing on film photographs of different modes of Thai transport and especially those which show samlors, tuk tuks and songthaews packed full of passengers. I’ve yet to nail the ultimate five Thais and one dog on a motorbike but one day I promise you I will.

Below are three photographs of samlors, two have passengers on board but the third and final picture sets a question for you to answer. It’s a question to which I don’t know the answer myself. 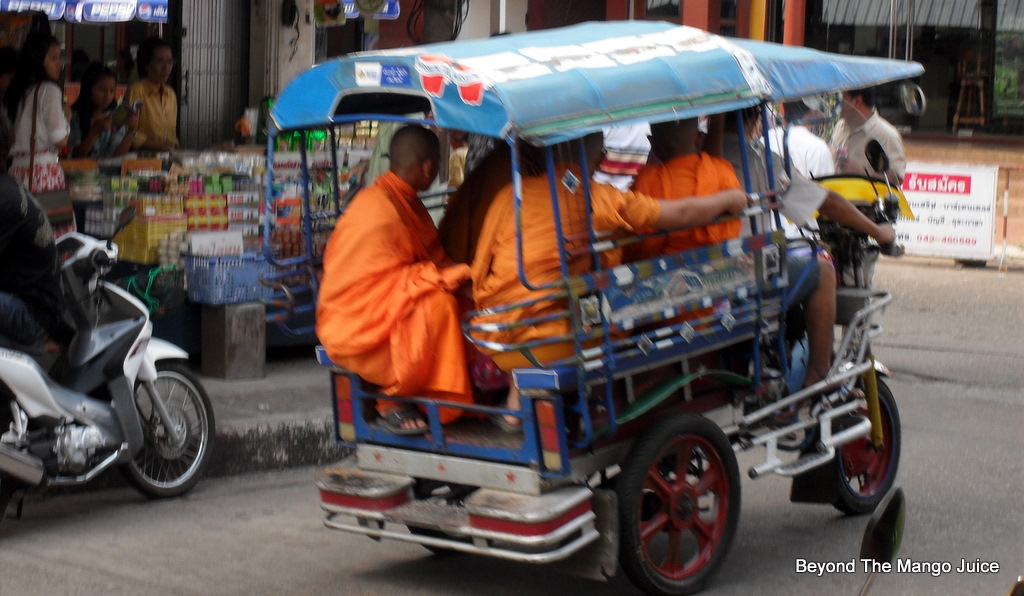 Four Buddhist monks arrive by samlor at Nong Khai’s Tha Sadet Market looking slightly squeezed together but nonetheless with an economical approach to their market day. 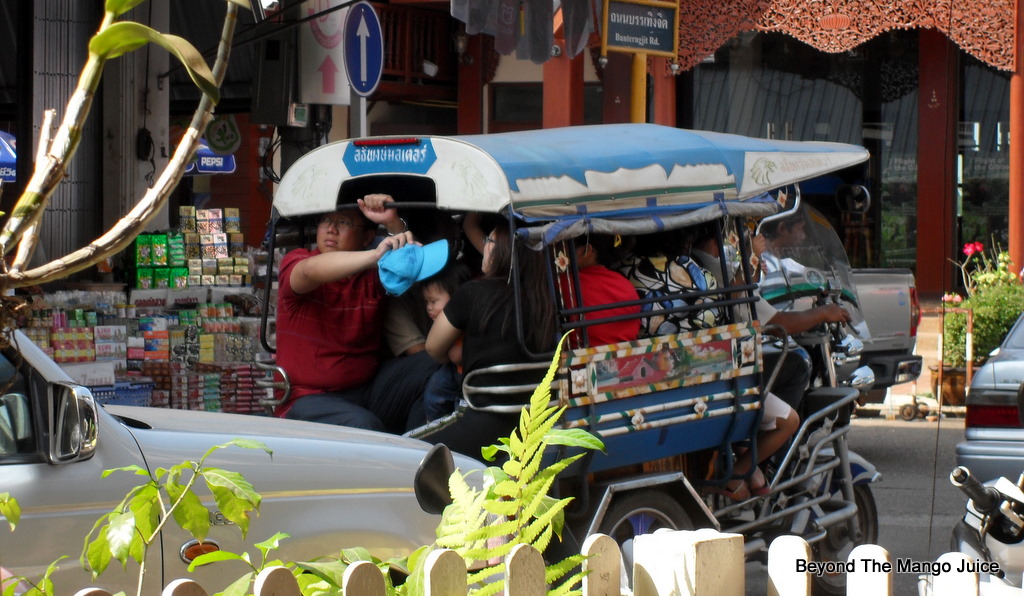 I’m unsure how many people are packed into the back of this samlor which is again arriving at Nong Khai’s famous market but at a guess I’d put the figure at nine. The farang (I think, not sure) sat at the back won’t be too disheartened by the fare because of the economical cost of the ride. 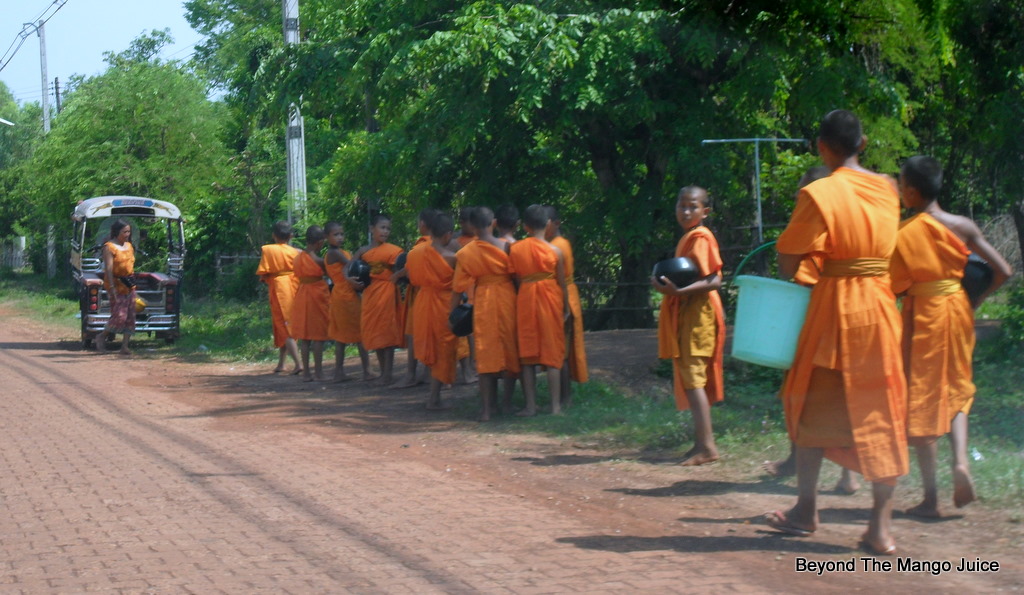 Surely you can’t get 14 novice monks into a samlor. Unfortunately I didn’t see the outcome of this as I took the photograph from the passenger seat of a fast moving car. Do you think all 14 monks were about to board the three wheel samlor and if so do you think it might have set a new samlor passenger world record?

No matter what the outcome was I think it’s a photograph which falls nicely into the What Happened Next category of questions.

Over to you, what happened next?