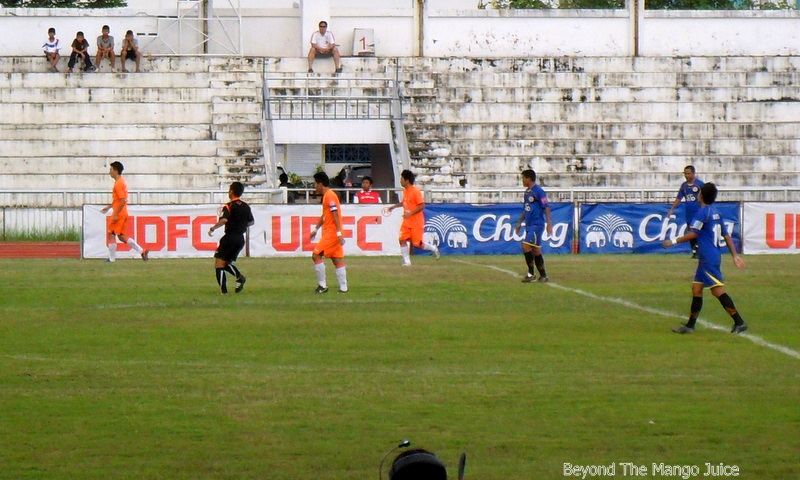 My London to Bangkok flight arrived early Saturday morning and by 12 noon my suitcase and I, plus 22 hours of mental travel baggage had arrived in Udon Thani. Four hours later I was sat on the cool concrete steps of Udon Thani’s Institute of Physical Education Football Stadium waiting for the start of the Northeast Giants final home game of the season against Sakon Nakhon. It was a Northeast Division One league match between two mid table teams with little to play for other than pride. Nonetheless I’d been looking forward to the event for weeks.

I arrived at the ground thirty minutes before kick off with my pre-match drinks swirling around my ageing bladder forcing me to make the kind of decision which many tourists around the world face everyday. Which toilet do you use when the signs on both are in a language you cannot understand? 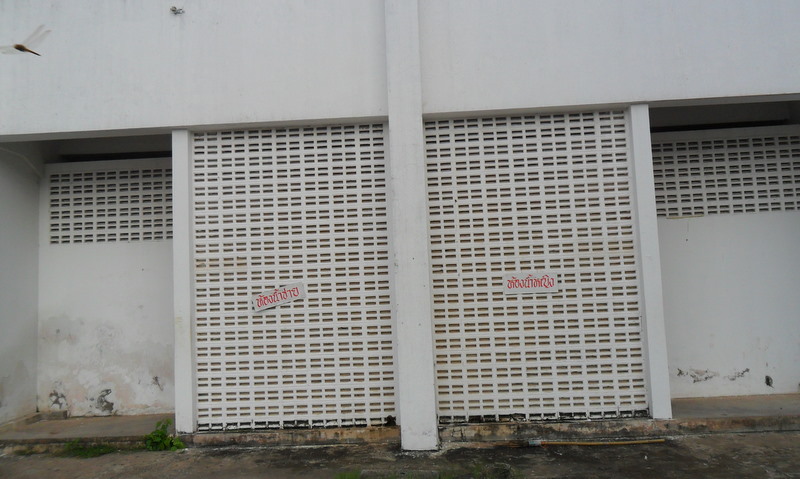 My choice was  an easy one. I’m right-handed, right-footed and never right. Easy. When I came back out three minutes later a Thai gentleman gave me a quizzical look and entered the other toilet on the left. Obviously he couldn’t read Thai either.

Minutes before the kick off the stadium’s tannoy boomed out the names of the two starting line-ups. Most of them were the kind of names which could snap a hardened sports journalist’s pencil, and have TV’s top football commentators thumbing through their newspapers for a day job. They were 22 unforgettable names which were very quickly forgotten. 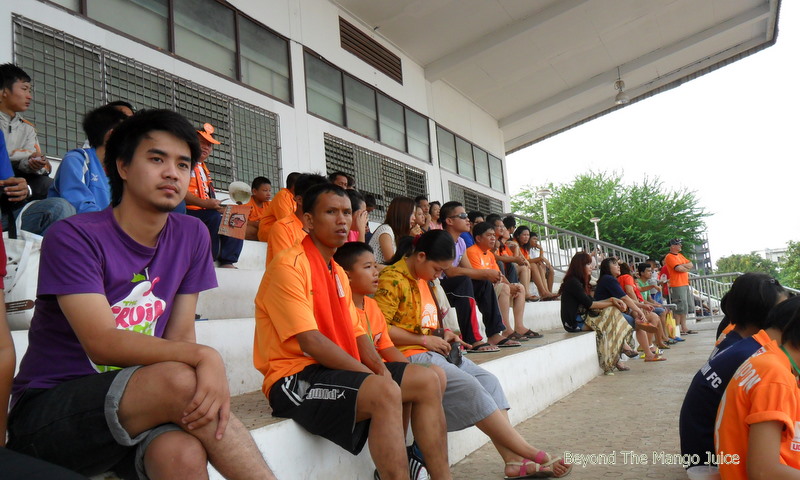 The game itself was played out before a crowd of 300-400 enthusiastic fans who witnessed two teams with very contrasting styles. Udon Thani’s slicker but slower passing game often fell flat on the lumps and bumps of the playing surface, and their admirable efforts to play total football on the cigarette stubbed green baize was akin to giving a keyhole surgeon a spade and pitch fork to work with.  Sakon Nakhon adopted a more defence minded game with their major weapon being fast counter attacks.

Udon Thani had the lion’s share of possession in the first half but their neater football failed to produce many goal scoring opportunities. Sakon Nakhon hit on the counter but they too lacked a real punch up front. The first 45 minutes ended goalless with the major entertainment coming from the main stand courtesy of Udon Thani’s very vocal self-appointed cheerleader. 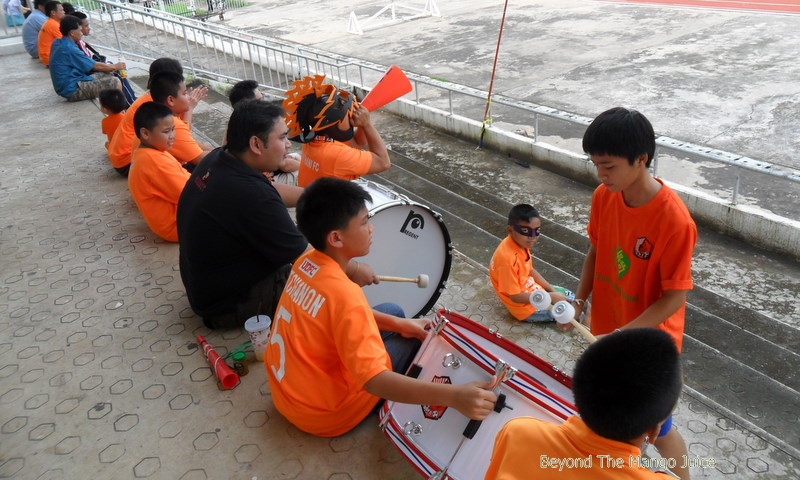 Dressed in the headgear of the Northeast Giants club badge the loud and proud cheerleader (pictured above with orange cone) kept the home crowd amused with a constant stream of songs. Two youths accompanied him by banging away on drums and a kind of homemade kazoo.

The game came to life ten minutes into the second half when a Sakon Nakhon counter attack ended with a right-wing cross being swept past Udon Thani’s keeper to give the visitors a one goal lead. Their small band of travelling supporters dutifully celebrated. Udon Thani now needed a touch of inspiration to level the game or a traffic cone with mega decibels. 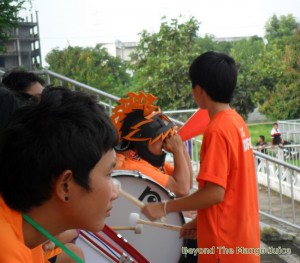 Udon Thani’s response to going a goal behind was to inject more spirit and haste into their game but despite a few close calls Sakon Nakhon hung on until only two minutes remained on the clock. A looping right-wing cross was met by the rising head of a Northeast Giant and the ball sailed past the Sakon Nakhon goalkeeper to hit the back of the net. Udon Thani’s main stand erupted in a gigantic roar and drums banged and boomed to the cheerleader’s chants of ‘Udon Udon’.

The orange clad Northeast Giants pressed for the winner in added time but the referree’s whistle signalled the end of the game with the score 1-1.

My apologies for omitting players names from this report but my pencil broke just minutes before the kick off.