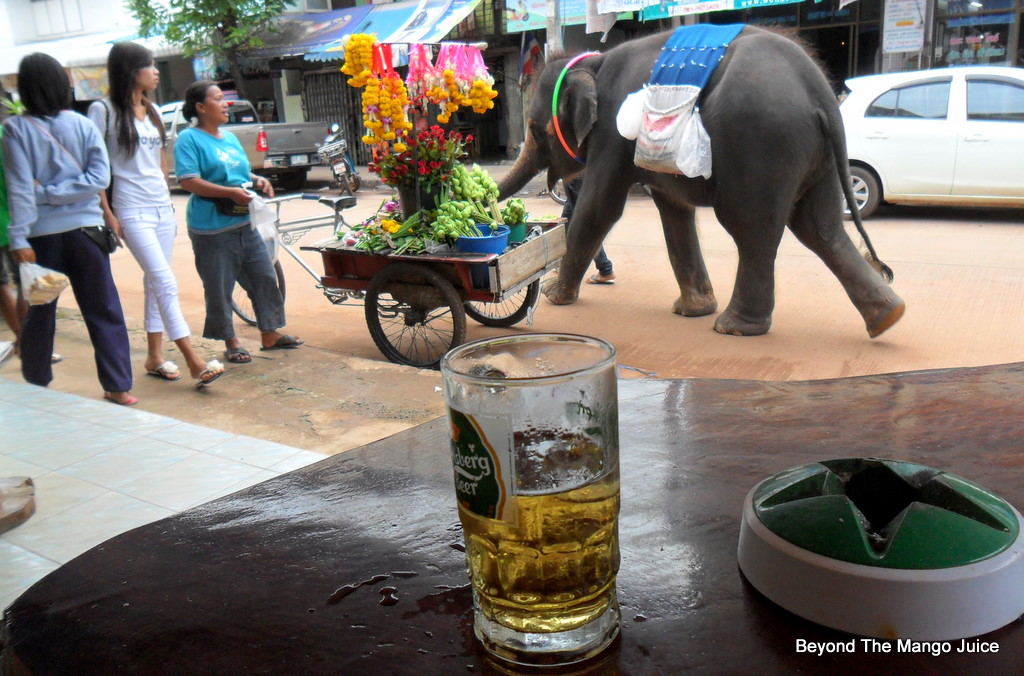 In August this year I put together a pictorial post titled My First Time in Chiang Mai in Pictures which included many shots from a four-day vacation Wonderful Wi and I took in Northern Thailand’s foremost cultural city. The post proved to be quite popular and so with that in mind I would now like to present a similarly themed pictorial on my recent trip to Udon Thani Province in Northeast Thailand.

The top photograph is my favourite picture from my recent two-week stay in Udon Thani. The photo has the vibrant colours of a garland’s flowers mingled amongst the allure of red roses, the controversy of an elephant on a city’s streets, and an elegant tall and cute Thai girl (I hope) swathed in the colour of peace and innocence, pure white. The glass of cool beer and butt-filled ashtray seemed to follow me around for large parts of my holiday but below you can view one or two photographs where the amber nectar and nicotine were nowhere to be seen.

The photographs are not a guided tour of Udon Thani or rural country life, just simple pictures which caught my imagination and eye. 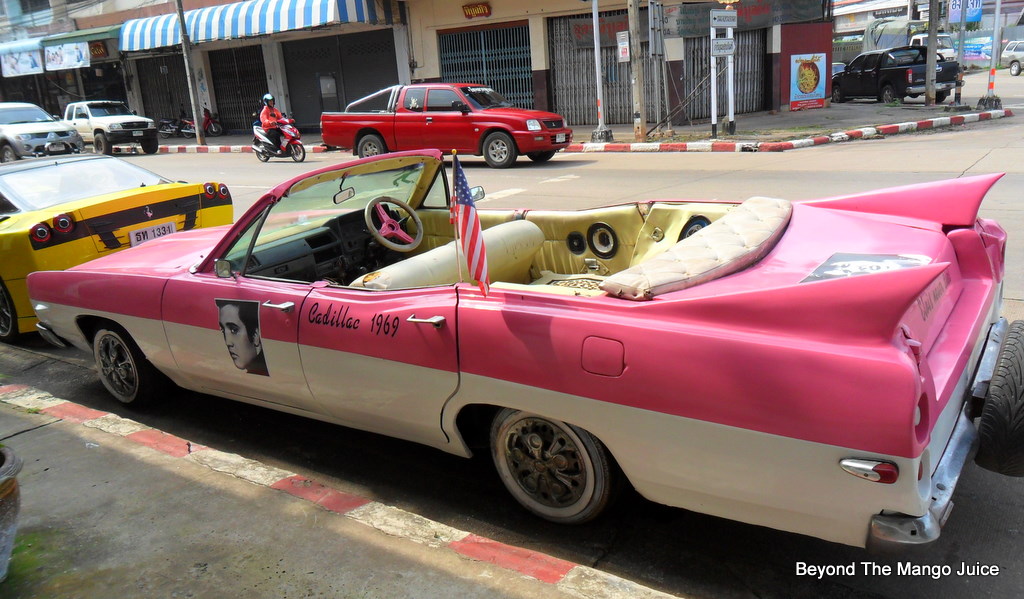 You won’t see many Pink Cadillacs in Thailand but this one nearly burnt through my cheap 200 baht sunglasses when I stumbled upon it on my way to see Udon Thani’s football team in action. 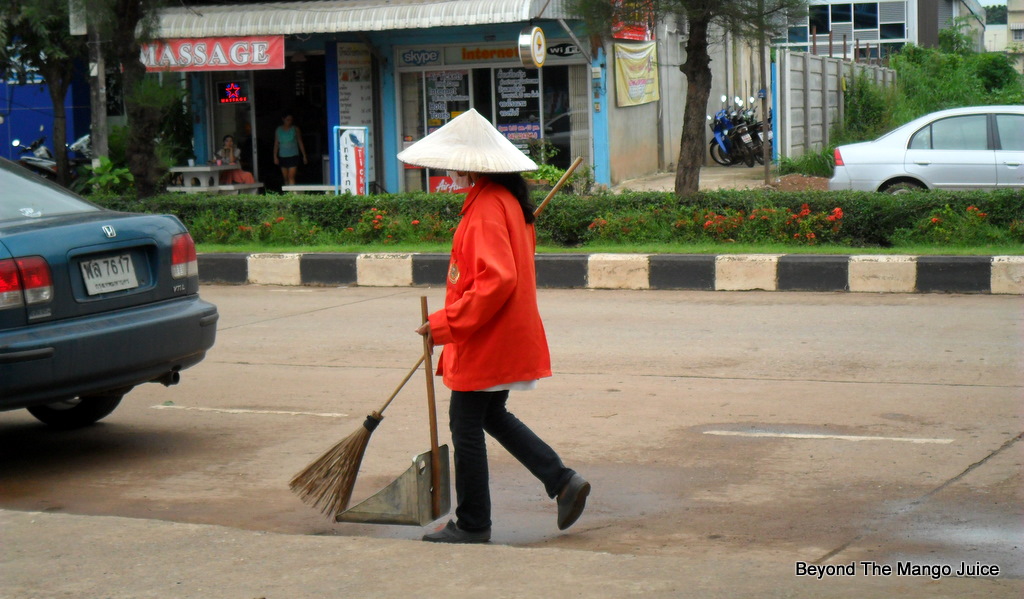 A very colourful road sweeper in a rice field style conical hat goes about her laborious work whilst in the background Udon Thani massage girls await their next customers. Quite a contrast in both work ethics and no doubt monetary gain. 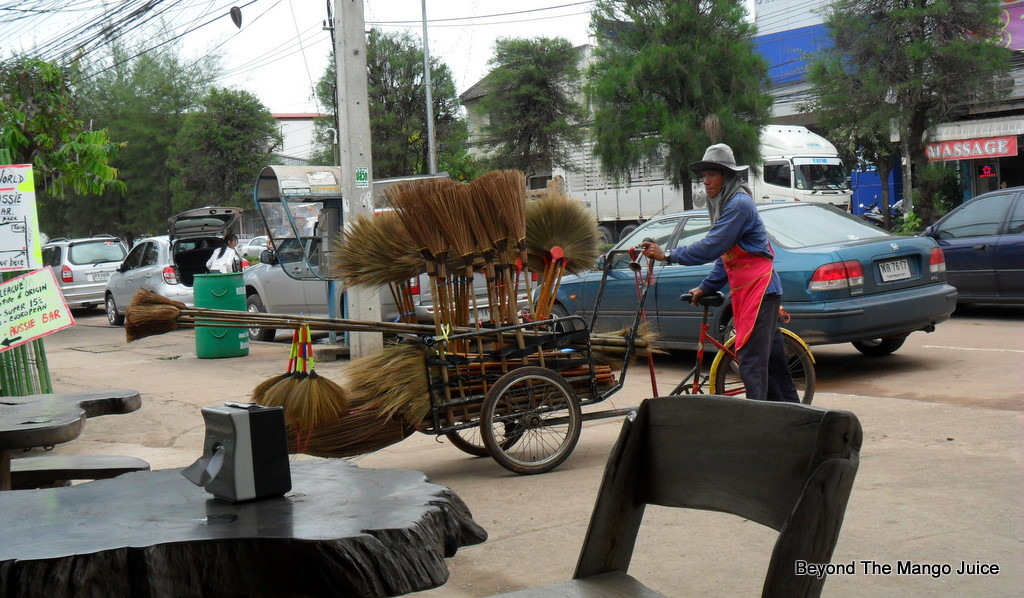 The massage sign rears its head once again as a brush salesman wheels his bicycle laden wares into the entrance to Udon Thani’s Nutty Park in the hope that its many beer bars are in need of a new brush to sweep them clean. 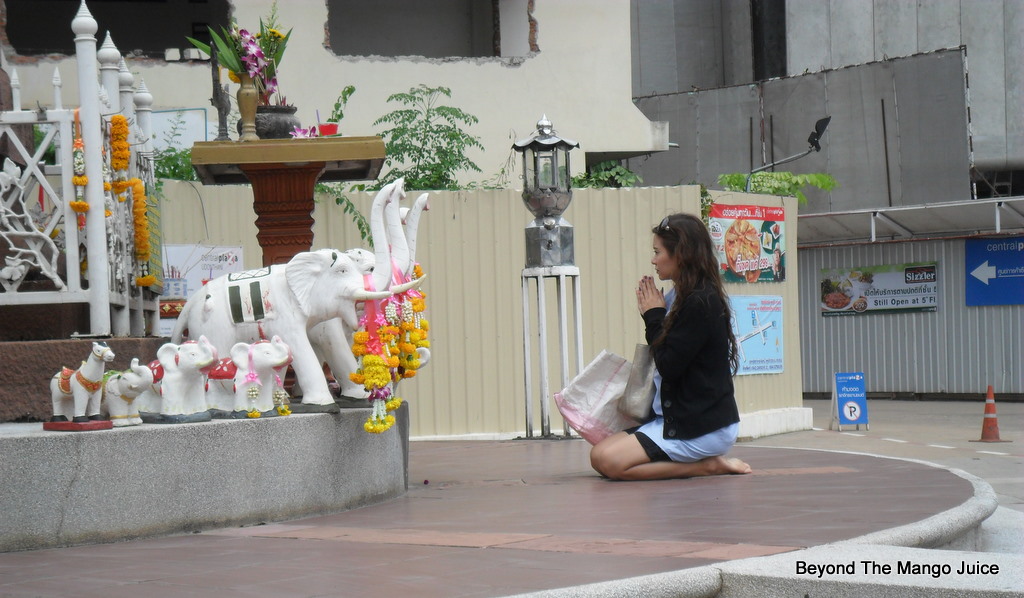 A Thai lady kneels before a Buddhist shrine in what you may think is a quiet location offering some form of privacy. Behind her is Udon Thani’s busy Central Plaza Shopping Mall and to the right is the ongoing construction of a new Central Plaza Mall which will be on completion in November 2012, one of the biggest shopping centres outside of Bangkok. Thailand’s Buddhist tradition meets the ongoing and unstoppable force of modern business needs. 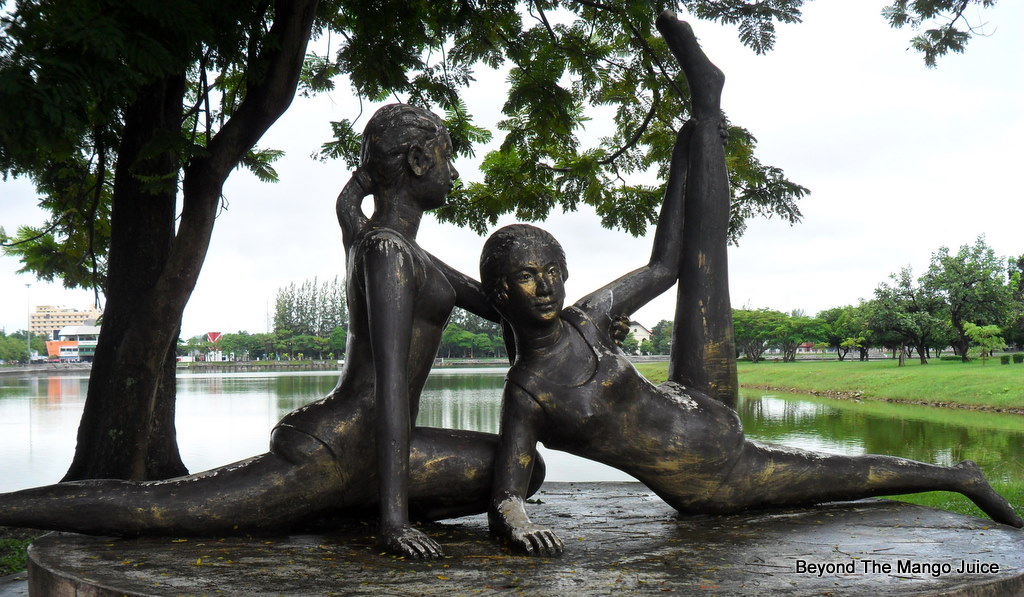 Udon Thani’s Nong Prajak Park is a beautiful place to visit early morning and opposite the public park are many breakfast cafe’s where Isaan food is available at ridiculously low prices. 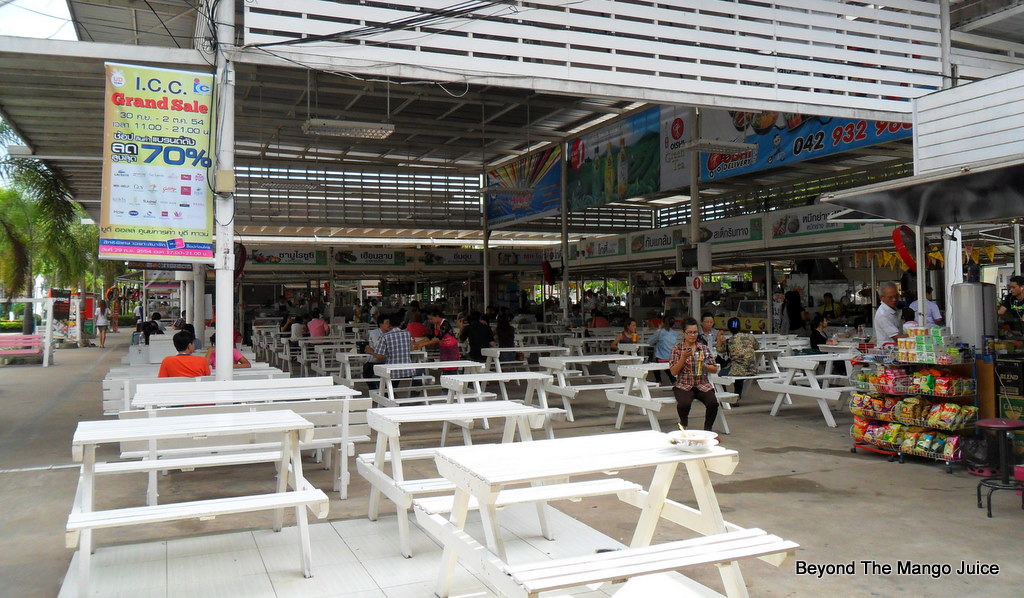 Udon Thani’s UD Town Night Market starts to slowly bristle with life late afternoon and is a must see place for those of you who like to shop, enjoy a drink or two and socialise amongst a sea of Isaan food dishes. UD Town is right in the heart of Udon Thani’s nightlife sector. 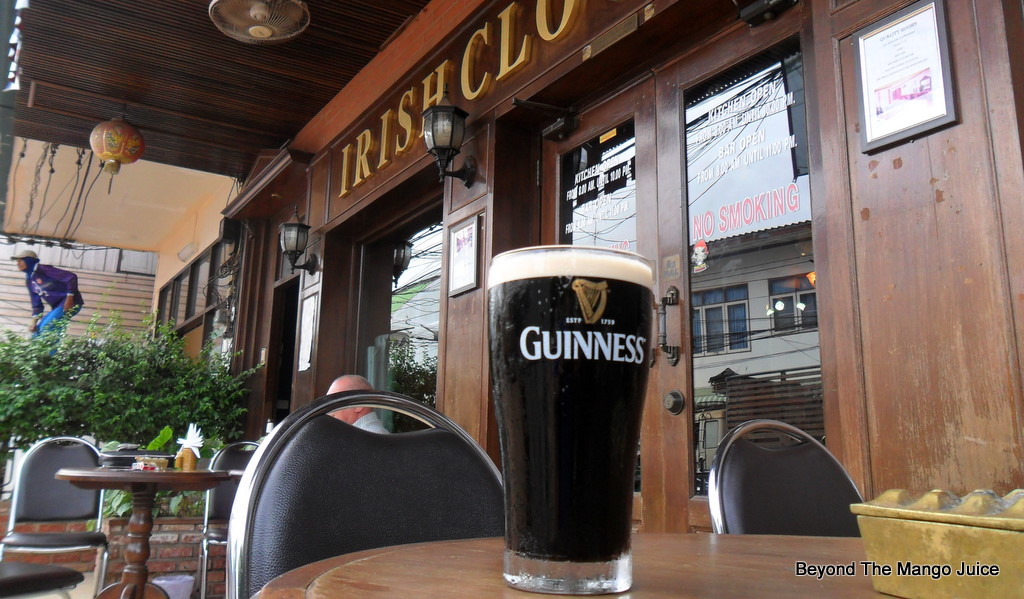 I promised no amber nectar and I’ve kept to my word because this is a pint of the black stuff which I enjoyed at Udon Thani’s best known bar The Irish Clock in Soi Sampantamit. Udon Thani has many western beer bars and whilst some are up for rent, closed down, or struggling with a lack of customers, The Irish Clock continues to tick and tock with a regular stream of expats and tourists streaming through its doors. 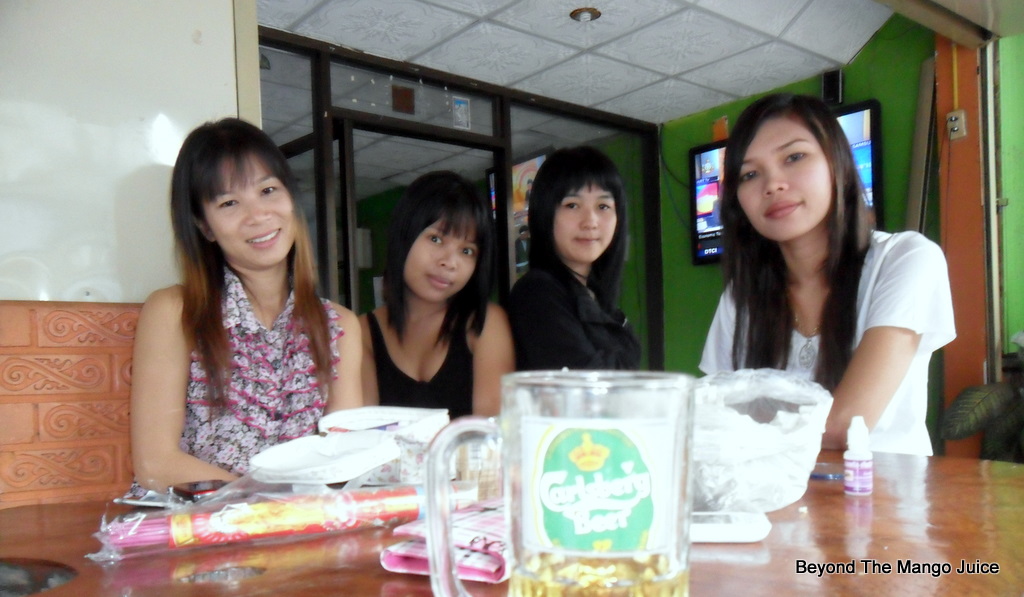 There’s a hint of amber nectar in this photograph of four Udon Thani bar girls about to start their evening shift at The Beach Bar in Soi Sampantamit. Despite a lack of tourists in the city, The Beach Bar was one of the busier bars in Udon Thani’s nightlife area. 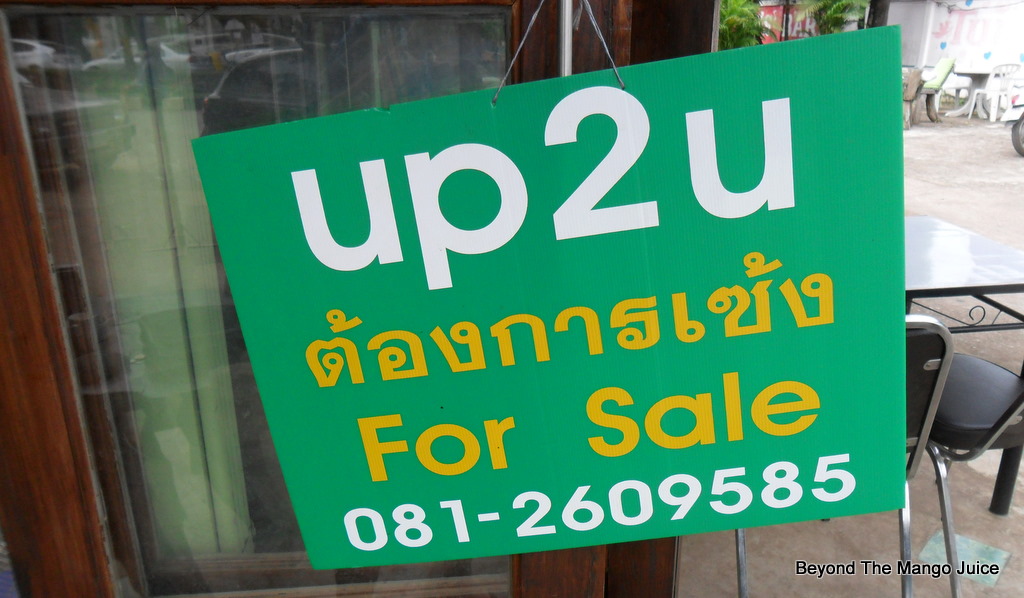 This is the ultimate bar for sale sign. Nutty Park’s up2u Bar is up for grabs and I don’t think you’ll find a better for sale sign in the whole of Thailand. Take it or leave it, Up to You. 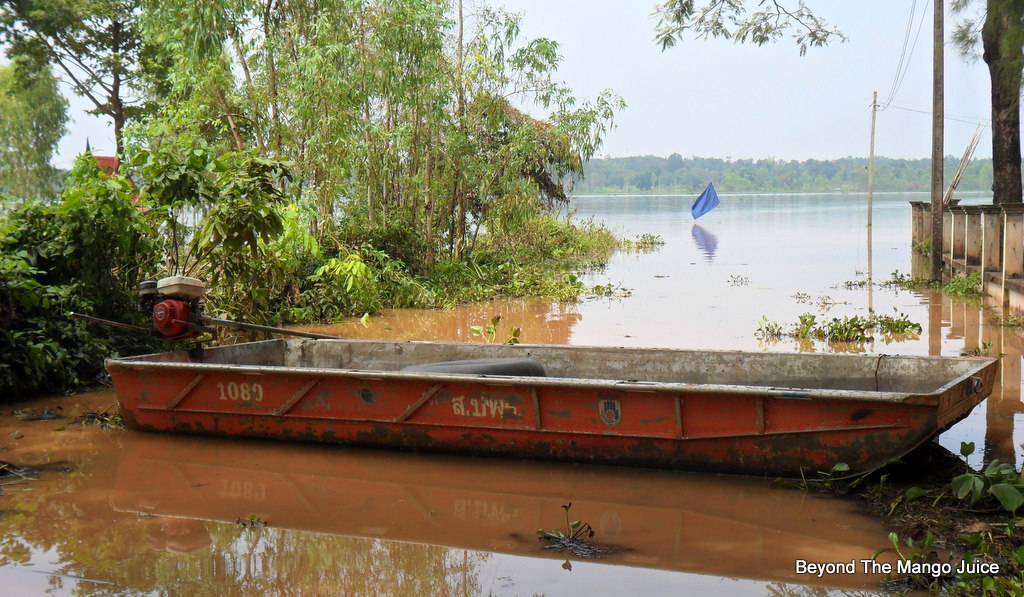 The boat in this picture is afloat on a road which enters and exits Wilai’s village in Udon Thani Province. The blue flag in the distance marks the banks of the Wang Chang River where a T-Junction dirt road runs alongside. To the left of the trees and vegetation are a row of houses and a nursery school which were flooded by the overflowing river. Fortunately the slightly rising road saved the majority of village homes from any flood damage. 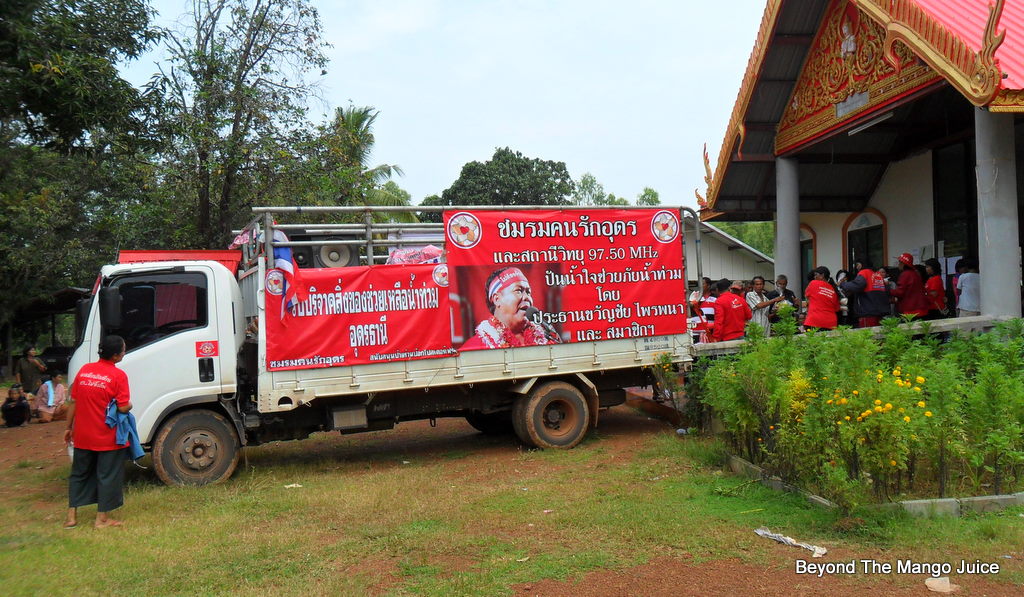 The floods had left the village cut off from its small neighbouring town which is a major source of supply for many villagers although the boat in the previous picture was provided for those who needed to make the trip. School children being the major passengers.

An Udon Thani Red Shirts flood relief truck did make it through to the village from its rear entry point and they handed out vital supplies to the village Wat (temple) to disperse to those most affected by the floods. 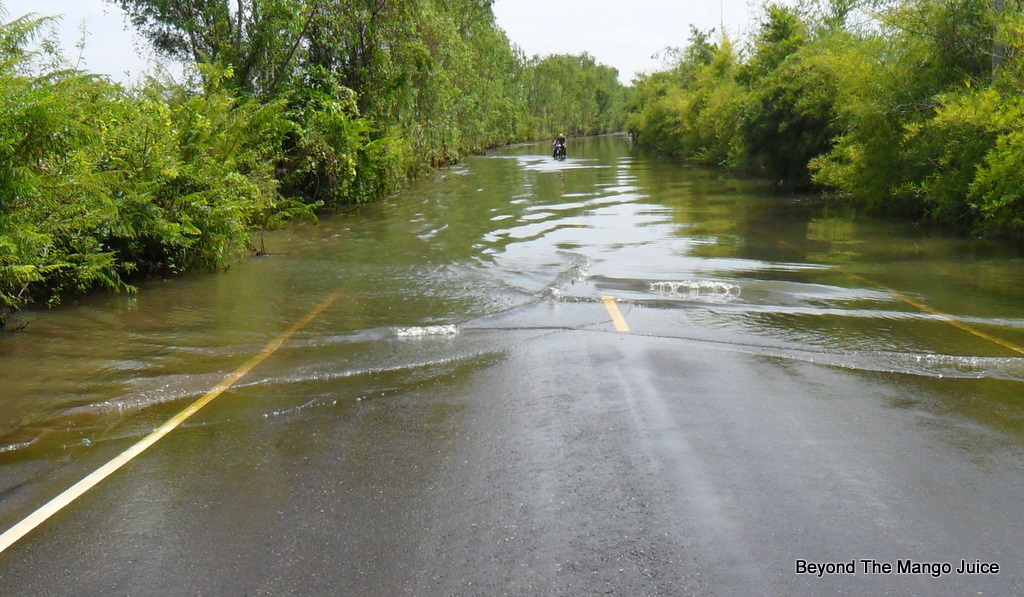 During my ten-day village stay the sun eventually won its battle with the rain, and roads exiting from the rear of the village became active although heavy overnight storms sometimes closed them off once again. Throughout my stay the road to the small neighbouring town was impassable. This photo is of a country road near Wilai’s village which leads to Ban Dung. 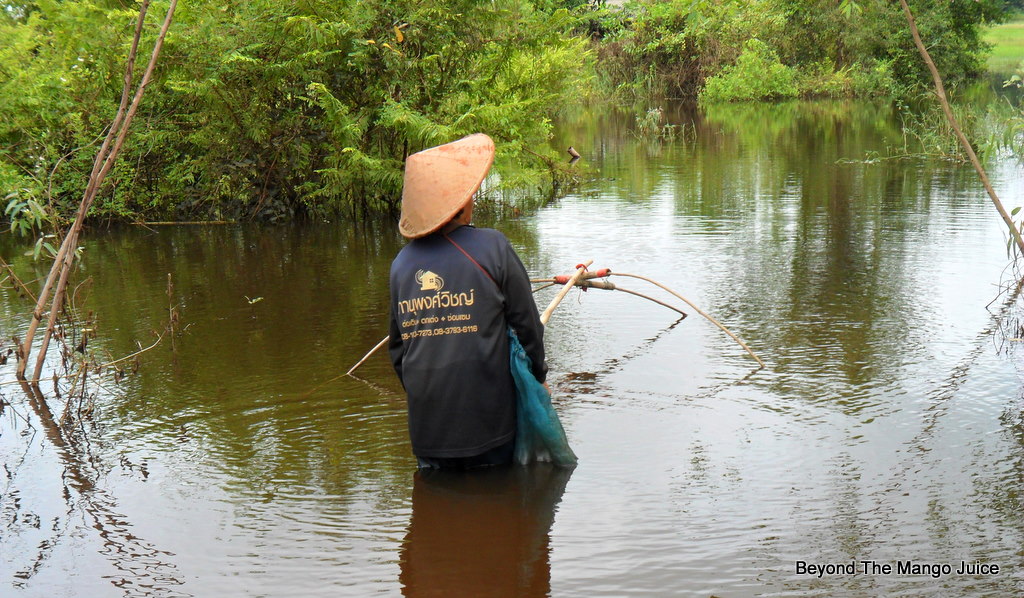 Wilai’s village was fortunate to escape the worst of the horrendous conditions which many regions of Thailand have, and are still, exposed to. However the tiny crumb of comfort to come from the floods, if such a thing can exist, is that fishing in some rural areas is brought much closer to home. There were as many women fishing as there were men. 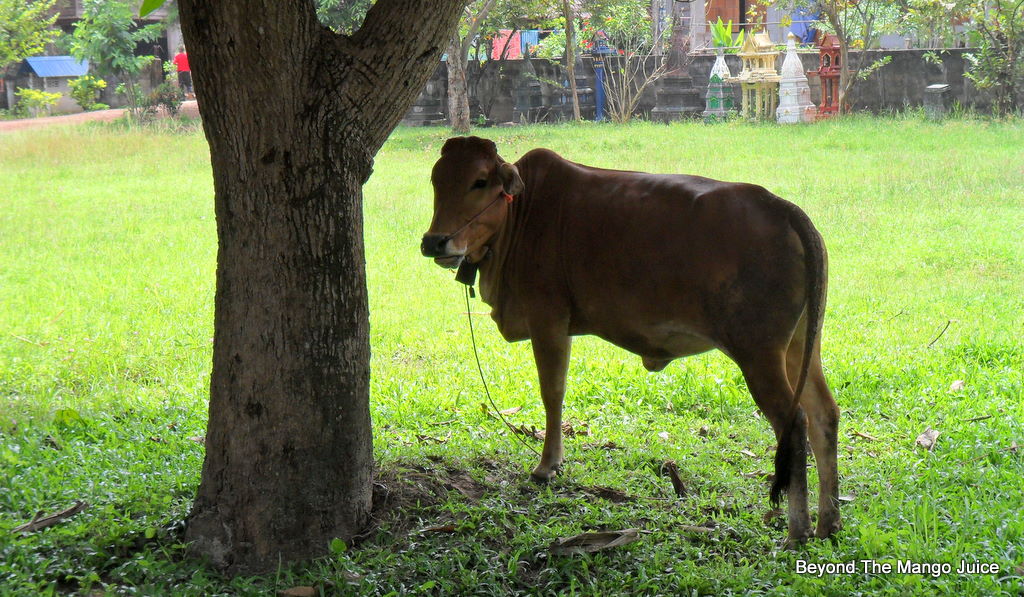 It was dry land on the grounds of the village Wat as this picture shows. Is that a three-legged or four-legged cow? 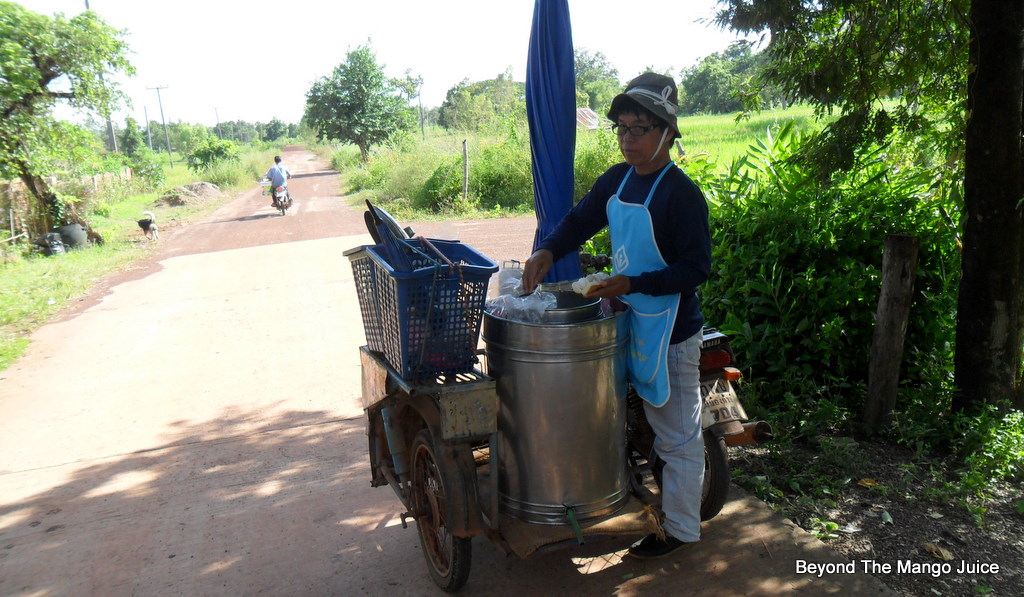 The temperatures during the day were considerably high with any rainfall coming in the evening or through the night. Here the ice cream man makes his usual afternoon trip through the village. Business as usual despite the floods.

I hope you have enjoyed viewing some of the photographs on show.