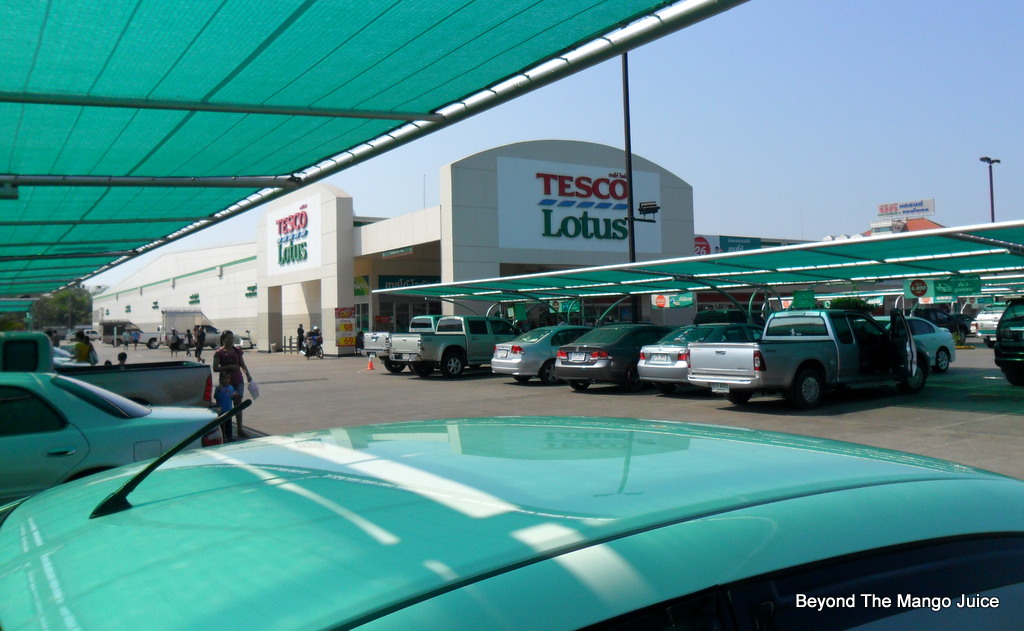 Silk purses and pigs ears are the perfect way to describe the huge contrast between Thailand’s big supermarket chains and the Kingdom’s humble village shops.  Chalk and cheese would seem too simple a phrase to represent the dissimilarity between the two very different types of grocery and general merchandise stores. One is lush and plush, the other all too often bare and barren.

Thailand’s big store supermarkets like Big C, Carrefour and Tesco Lotus need little or no explaining to most readers of this site because they’re exactly like those in western countries. However the latter of those three superstores, Tesco Lotus, has over the past few years faced a barrage of criticism about its rapid expansion into Thailand’s major cities and smaller rural towns.

The critics argued Tesco Lotus’ aggressive expansion plans which included smaller express stores, would stifle and suffocate the life out of local markets and small family run grocery stores. That has indeed been the case throughout Thailand but the local village shops in the backwoods of rustic Thailand have kept the ‘boil-in-a-bag’ magnate at bay with selective bulk buying shopping tactics at the big superstores themselves.

Tesco Lotus have given village shopkeepers another outlet for purchasing both new and existing items in bulk at discounted prices and so it can be argued Thailand’s ‘Supermarket Price Wars’, have in fact strengthened the position of many village shops. 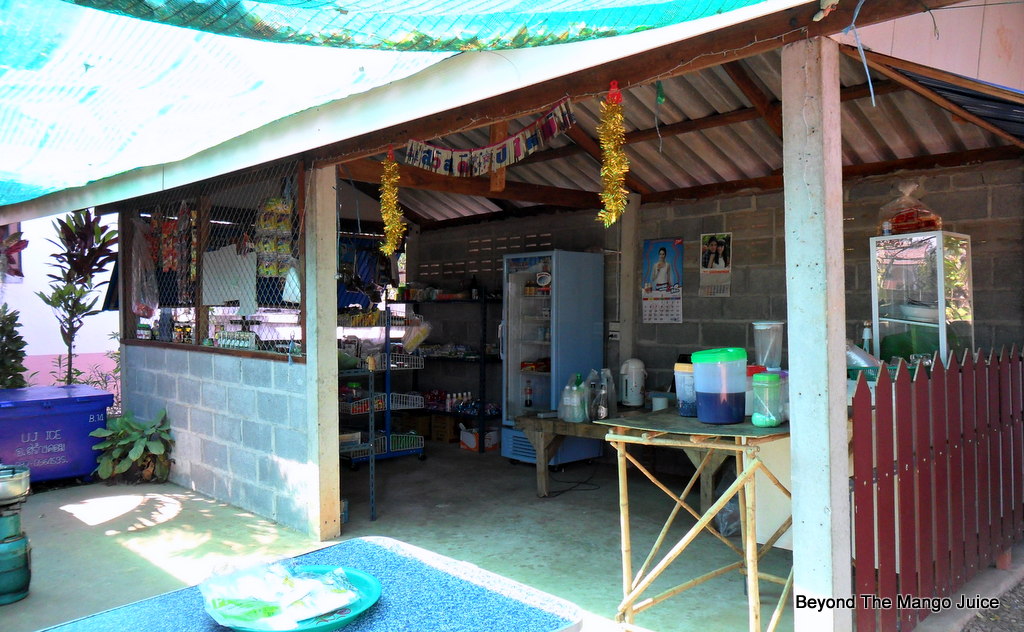 Big supermarket chains have their obvious advantages for affluent Thais and westerners living in rural Thailand but for the less well-heeled villager, and that means most, their local village shop is a very important part of their daily lives, because when you’re riding Shank’s Pony, the village shop is a superstore, restaurant and community shack rolled out as one. 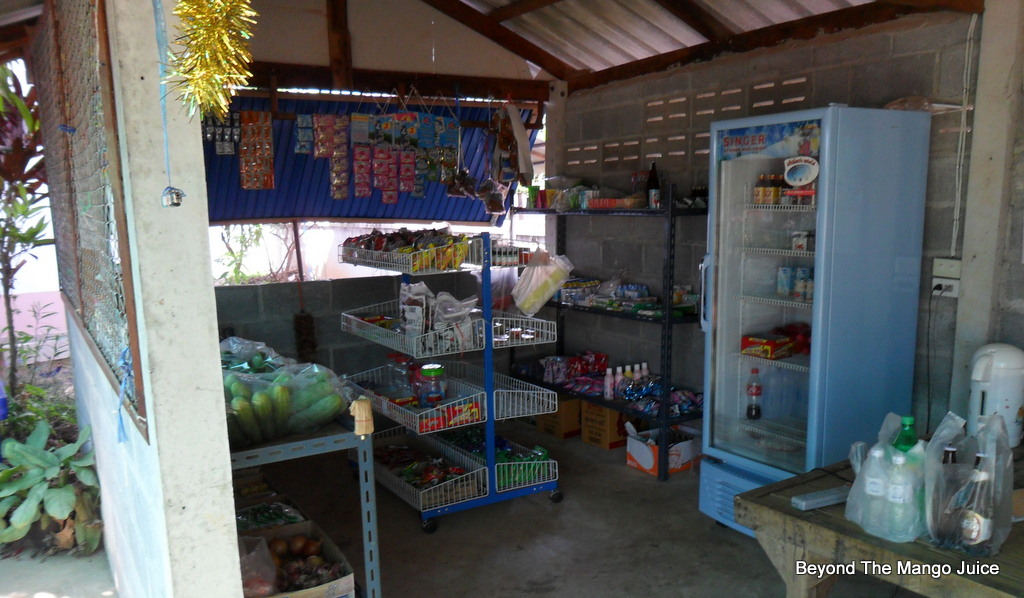 Open air replaces air con at Thailand’s rural village shops and a mangy dog or two takes the place of the supermarkets security staff. The dogs do as a rule, keep out of the shops, which as you can see from the above picture are basic but reasonably clean. 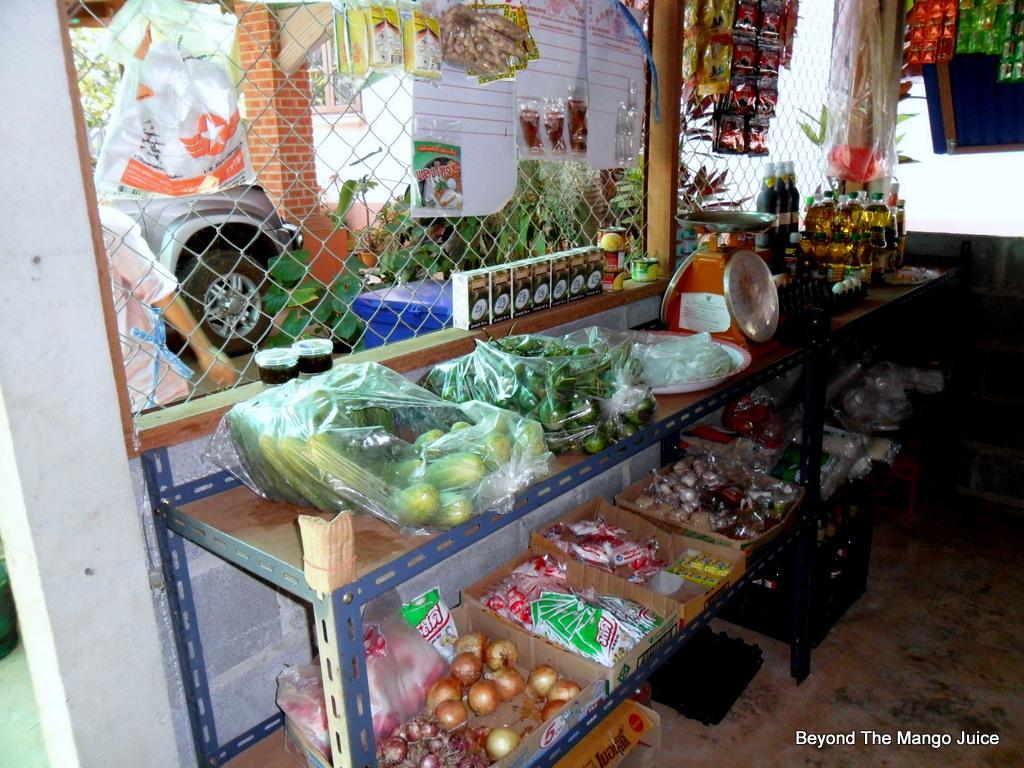 The all-in-one coffee packs, toothpaste and energy drinks may have come from Tesco Lotus or wholesale giant Macro but the fruit and vegetables on sale are generally locally grown.

Try getting ‘tick’ at Tesco Lotus and the long arm of its security staff will almost certainly be employed, but that’s not so at the village shop where a book is normally open for customer credit. The village shop’s credit book is based on the long-standing belief that Shank’s Pony never travels far. 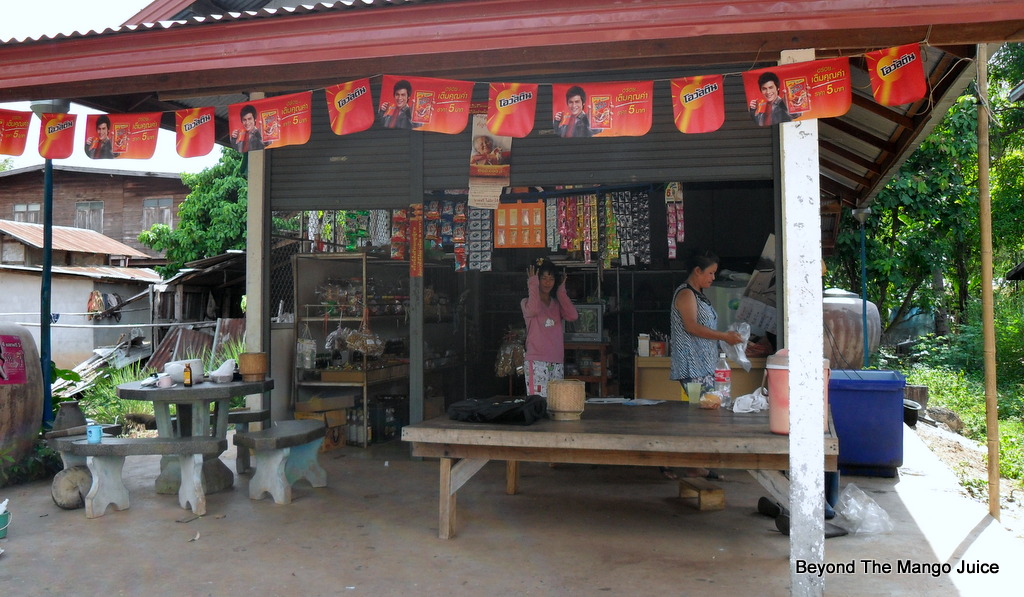 In a village with a population of around 500 people you can easily find five or six family run shops but there may be a community one too. The photograph above is of a community shop where villagers can pay a small one-off membership fee and take a year-end share of the shop’s profits. After paying the shopkeepers salary and running costs, members may receive as little as 50 baht (US$1.66) each from one year’s trade. The co-operative system encourages customer loyalty but the dividend pay out is disappointing. 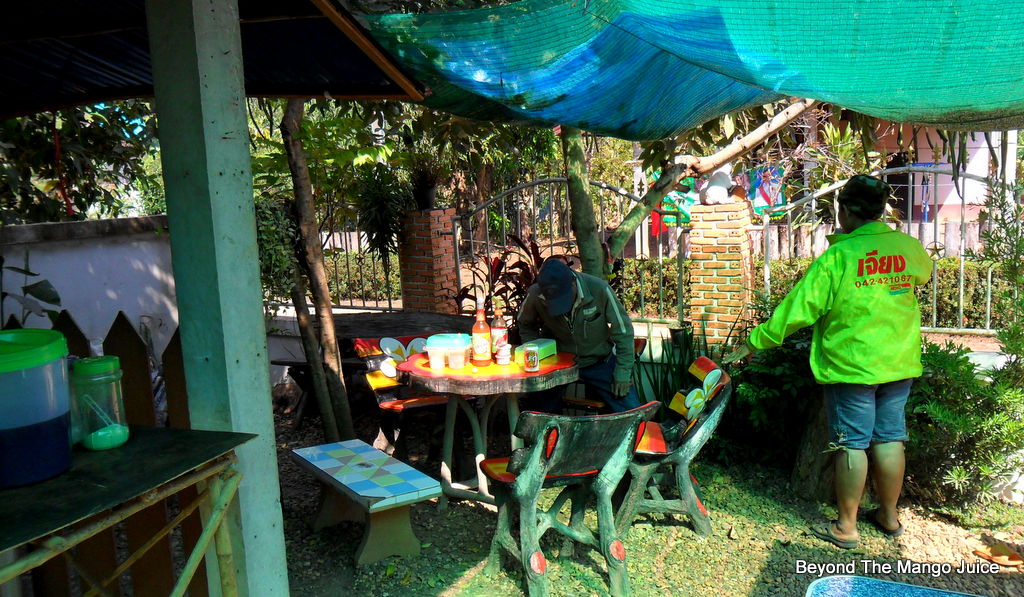 Village shops cater for everyday basic shopping needs but they are the hub of village life as well. Villagers pop by in their two’s and three’s to share food (usually noodles) cooked by the shopkeeper and to lounge around and mull away the heat of the afternoon. Those villagers lucky enough to work sometimes share a bottle of beer or lao khao in the late afternoon. The shops don’t exactly buzz but there’s usually an old lady, young mother or school kid hanging around.

Thailand’s rural village shops are alive and ‘ticking’, due its core of customers who have a childlike distrust of contemporary Thailand’s new fixation with multinational brands, but a survival sense which grasps the need to keep the community wheel spinning. And besides, Tesco Lotus and their ilk wouldn’t take too kindly to Shank’s Pony being tethered in their green-netted car ports.