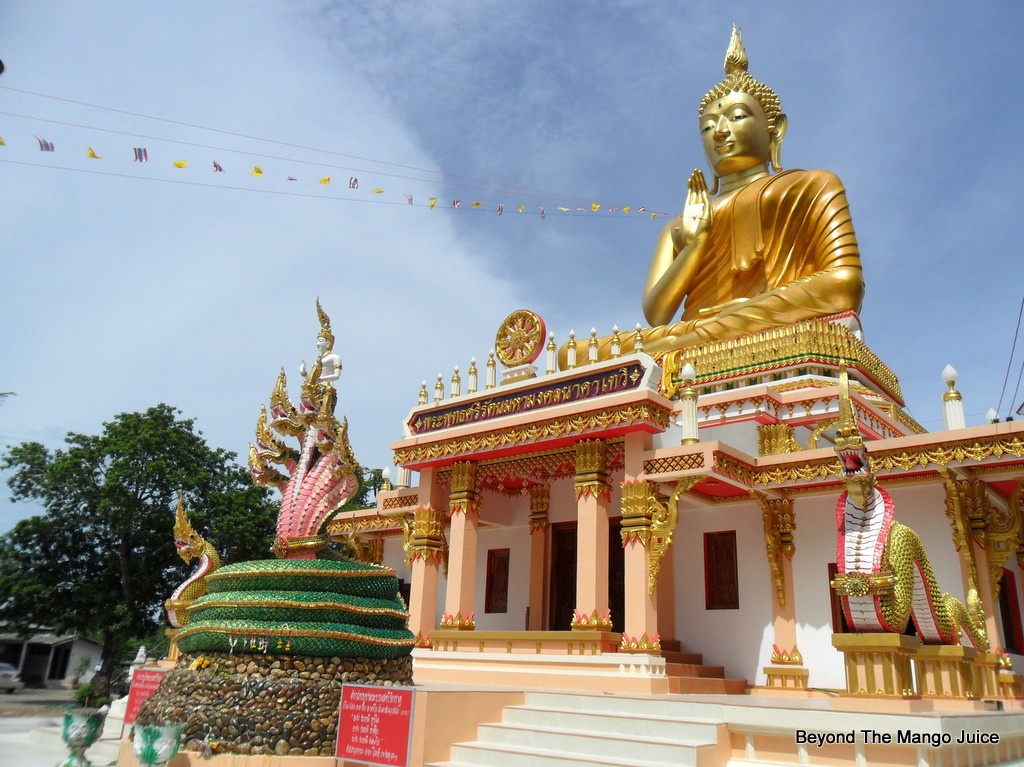 Ban Na Kha Silk Village is a well-known tourist attraction in Udon Thani Province and is highly regarded for its locally made quality silk and cotton khit-style woven fabrics which are sold at a large market in the village. Ban Na Kha is 15 kilometres north of Udon Thani on Highway 2 and is instantly recognizable by a sizable Golden Buddha sat upon a temple. Wat Ban Na Kha Thevi is one of the less-chronicled temples in Udon Thani but if you visit Ban Na Kha Silk Village then your trip would be incomplete without viewing its charming and eye-catching temple.

This picture gives a good idea to the size of the Golden Buddha sat atop the temple. The monastery building on the far right appears to be tilting itself forward in a show of respect to the magnificent Buddha image and temple below. 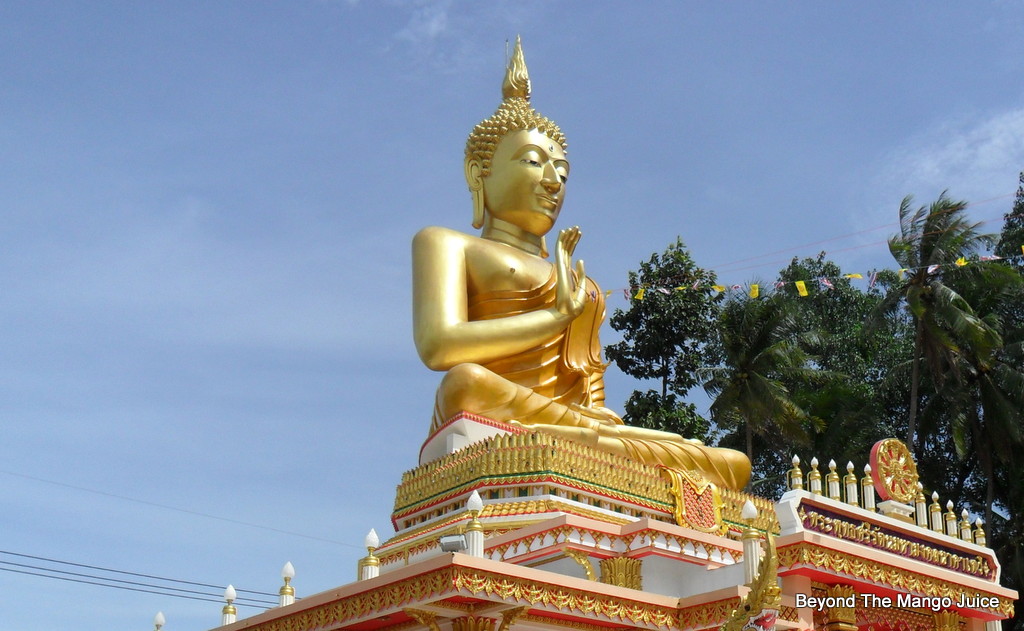 A close-up of the giant Buddha at Wat Ban Na Kha Thevi. The Buddha looks down to the temple grounds and I’m sure thousands of visitors to Ban Na Kha have looked back up with respect and admiration. The view is quite striking against a background of blue skies and whispers of cotton candy clouds. 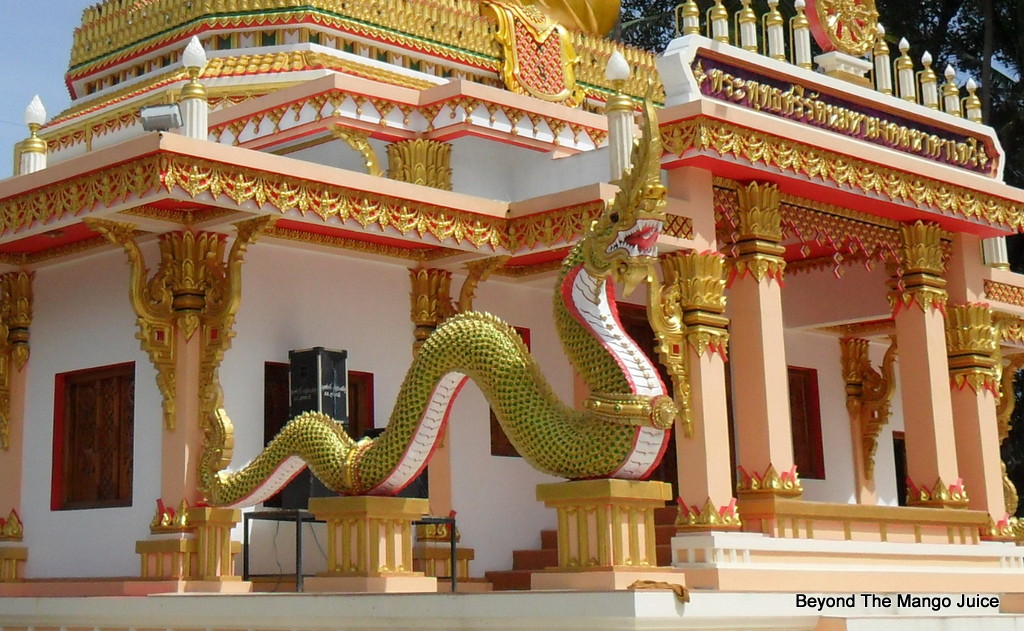 The temple’s entrance is guarded by a seven-headed Nāga (mythological serpent, a fire-breathing dragon) and flanked either side by two other impressive looking Nāga as well. They look great from a distance but close-up they are big on detail and you can appreciate the skilled workmanship and time-consuming effort put into creating them. 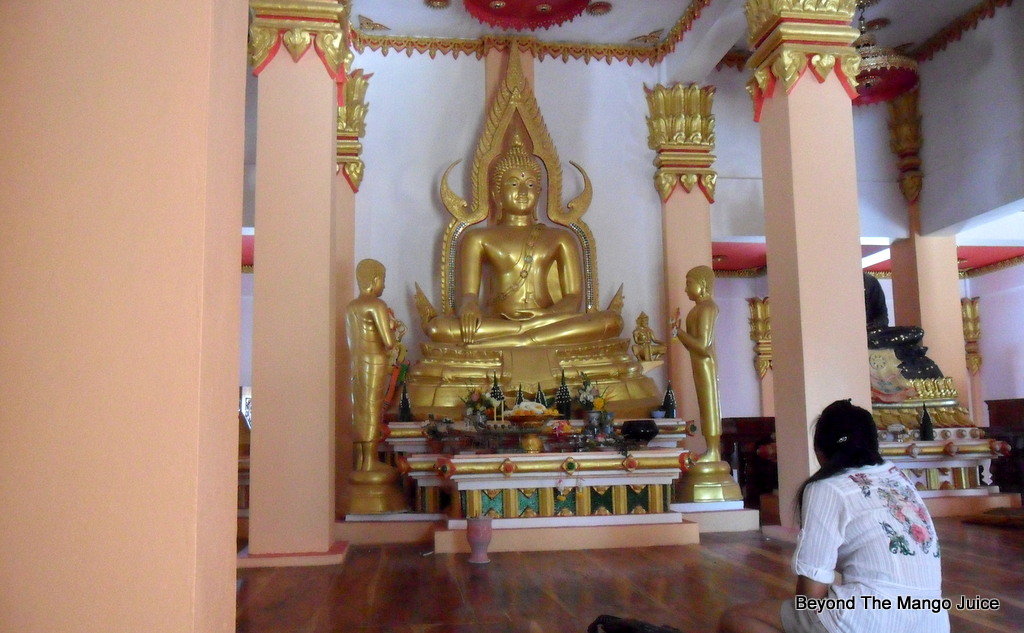 What do Thai girls pray for when they kneel before Buddha?…. lucky lottery numbers would be my guess in this photograph. Young Wilai probably asked for good luck for her family, a more natural hair colour for me, but I reckon this conversation was mainly to do with a six-digit winning combination. The sitting Buddha in meditation was eye-catching but there was something else inside the temple which caught my eye even more.

The remains in this glass case are a bit of a mystery. They were discovered along with ancient pottery, other bones and work tools when the temple was being built. Carbon dating has yet to be carried out (so I understand) , on the bones and artifacts, but there are strong suggestions they could date back to the Ban Chiang prehistoric period. Way back then, over 5,000 years ago, Ban Chiang’s adult corpses were buried with pieces of pottery covering their heads and legs. Conclusive proof… not exactly, but a strong suggestion is there. 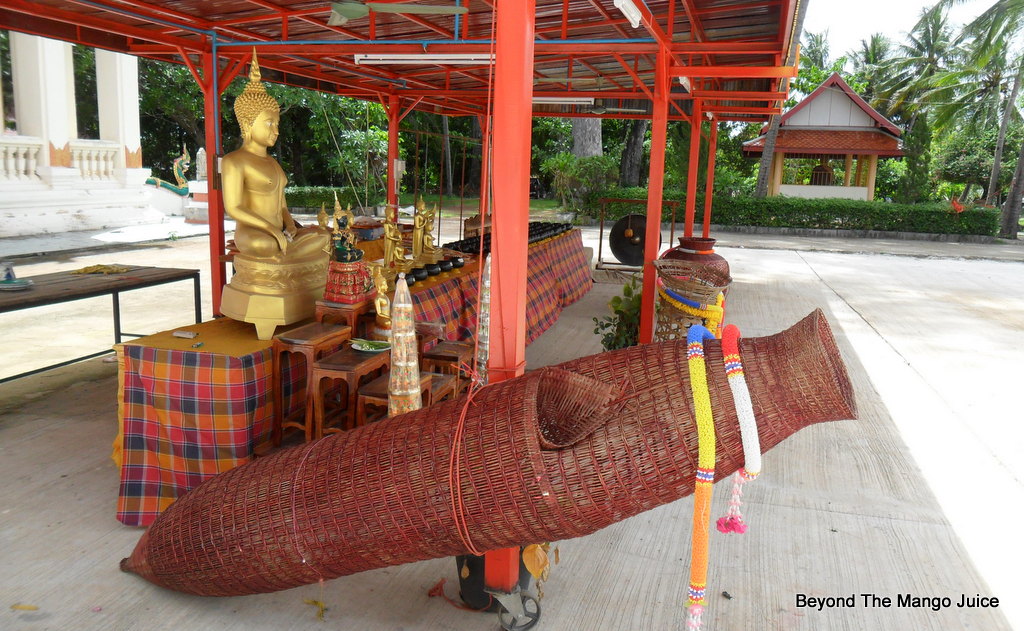 This is the temple’s ceremony stand and the long fishing basket netted my attention. What was it there for?… and why were there flower garlands draped around it? After much thought my best guess was the basket was linked to the seven-headed and two flanking Nāga guardians at the entrance to the temple. A fire-breathing Nāga must eat a lot of fish. Any thoughts on that one?

If you are travelling to Udon Thani and plan a trip to its much-publicized silk village then make sure you view Wat Ban Na Kha Thevi as well. If you travel to Ban Na Kha by car the temple grounds have a good-sized car park and the silk and cotton market is only a one minute walk away. There are also public bus routes from the city to Ban Na Kha.