Things To Do in Udon Thani – Kamchanod Temple and Forest Reserve 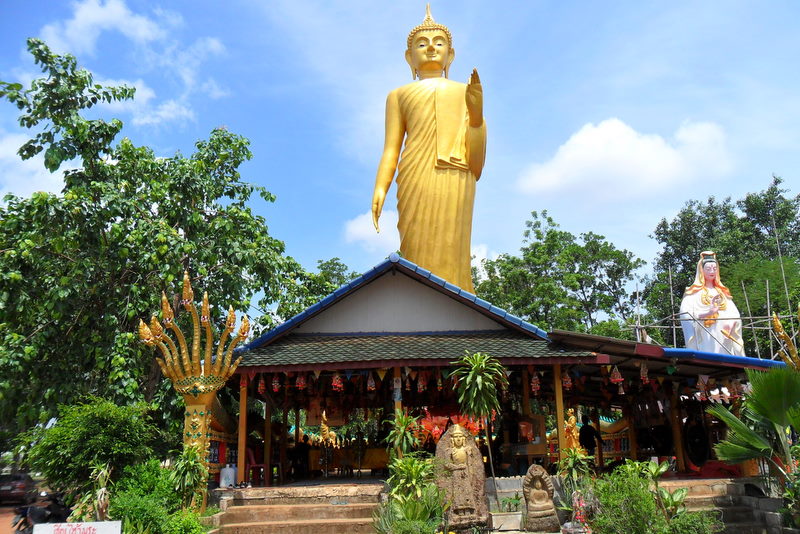 Kamchanod is a 20 rai forest reserve and lake in Wang Thong District near Ban Dung, Udon Thani, and the Nāga themed temple site is one of the most overlooked tourist attractions in the province. That’s a pity because loud whispers say Kamchanod is the holy place and entrance to the underground world of the mythical Phaya Nāga. Kamchanod is 90 kilometres from Udon Thani city, but if you have transport or can make other arrangements, it’s a place well worthy of a visit.

A typical Thai souvenir market greets you at Kamchanod. A giant golden Buddha lords over the market and the Buddha’s eyes point to where the real beauty of Kamchanod lies. 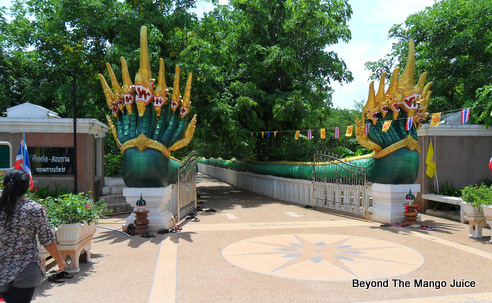 According to popular belief, Phaya Nāga lives deep in the waters of the lake which surround the densely forested island Wang Nakhin (Nāga Palace). Legend says the Nāga breathed fireballs into the sky to form steps for Lord Buddha to descend from heaven. The island is connected to the temple grounds by a long ‘snaking’ bridge guarded on each side by two seven-headed serpents.

It’s shoes off at the bridge entrance, and then a 100 metre or so stroll across the bridge to a small temple and sacred well.

Inside the temple is a shrine of Chaopu Sisuttho and on either side of the Wat are smaller tin-roofed shrines where Thais kneel and offer incense sticks, flower garlands and prayers to the great Nāga and Lord Buddha. The whole area is not too big, and trying to get an acceptable full photographic shot of the temple proved very hard to do. Bright sunlight filtering through the forest’s chanot trees further hindered that task. 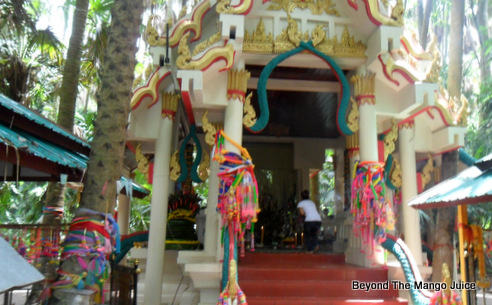 This photo is a bit fuzzy, but without stepping back into the forest itself, it was the best I could do. I’m not too keen on trampling through Thailand’s wooded areas, especially backwards. 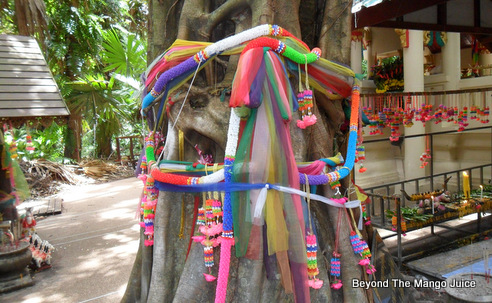 This picture shows many brightly-coloured flower garlands tied around a chanot tree. There were lots more adorning the small prayer shrines. 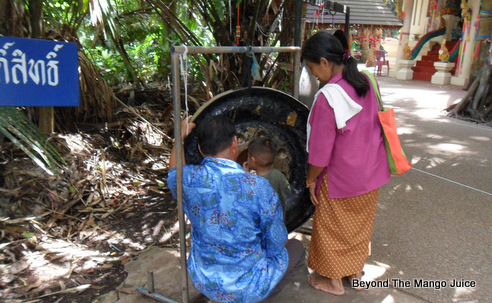 Have you ever tried to make a Buddhist gong sing? The idea is to rub your fingers around the centre of the gong and make it hum. When it makes the sound, it is loud, but I’ve never had success. Neither did this Thai family, but plenty do. 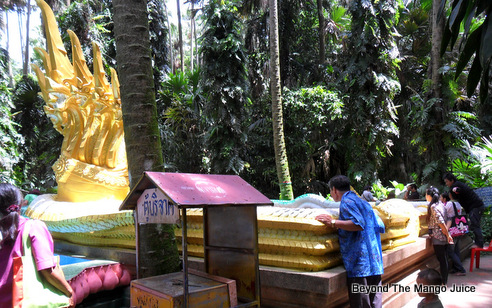 The wishing well had another seven-headed serpent guarding the small coins tossed into its water. Kamchanod is a popular place for Thais to visit and most seem spellbound by the great Nāga’s link to it. Foreign tourists are few and far between. Hopefully one day that might change. 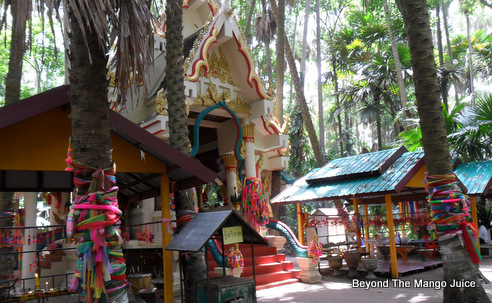 The mythical Nāga is reputed to live in an underground network of caves beneath the lake. The caves connect to waterways leading into the Mekong River. The Nāga is a figure of great fascination to Thais and each year thousands upon thousands of people line the banks of the Mekong River at Nong Khai and Phon Phisai for Thailand’s famous Nāga Fireball Festival. Huge crowds gather in expectation, hoping to see the great Nāga spit fireballs into the night sky. It does happen, but some sources suggest the fireballs are tracer bullets fired from the banks of neighbouring Laos.

The lake surrounding Nakhin Island has a calm and still about it.  And that fits cap in hand with the beautiful temple hidden behind a thick cloak of chanot trees. The trees hide a mystery because Kamchanod is also home to Udon Thani’s most famous ghost story. Were there spirits watching my every move? The forest has a real eerie look to it. 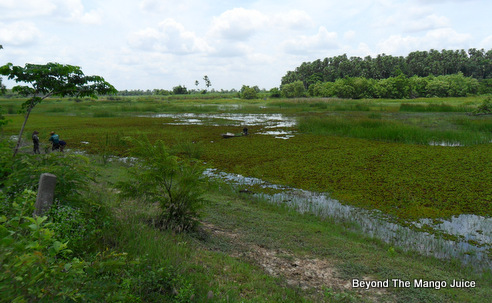 You can drive around the forest reserve following a fairly well-kept road and get a good view of Wang Nakhin Island and the lake around it. But to be honest, the route offers no real extra visitor value.

Kamchanod is about 10 kilometres from Ban Dung and is a temple site well worth viewing.