Thai prime minister Yingluck Shinawatra has been in New York this week to help promote Thai cuisine as the Kitchen for a Hungry World. Thailand is the world’s largest exporter of rice and the Thai government is targeting increased food production and exports to help combat world food shortages caused by global climate change. The project is an admirable one and full kudos go to sweet-looking Yingluck and her government for tackling the problem head on.

Whilst in New York, Yingluck presented 17 of the Big Apple’s Thai restaurants with ‘Thai Select’ awards as recognition for their excellent food and promotion of Thai cuisine to the core of the Big Apple’s citizens. That’s a great honour for those restaurants concerned but if Yingluck has another ‘Thai Select’ award tucked away in her handbag I’ve got a feeling it will not be heading to Wonderful Wi’s village in Udon Thani.

Wilai’s village house has three kitchens, one inside and two outside, and it’s her mama’s kitchen I’m referring to when I suggest Yingluck should ‘Have a look at this one’.

Thailand – The Kitchen for a Hungry World 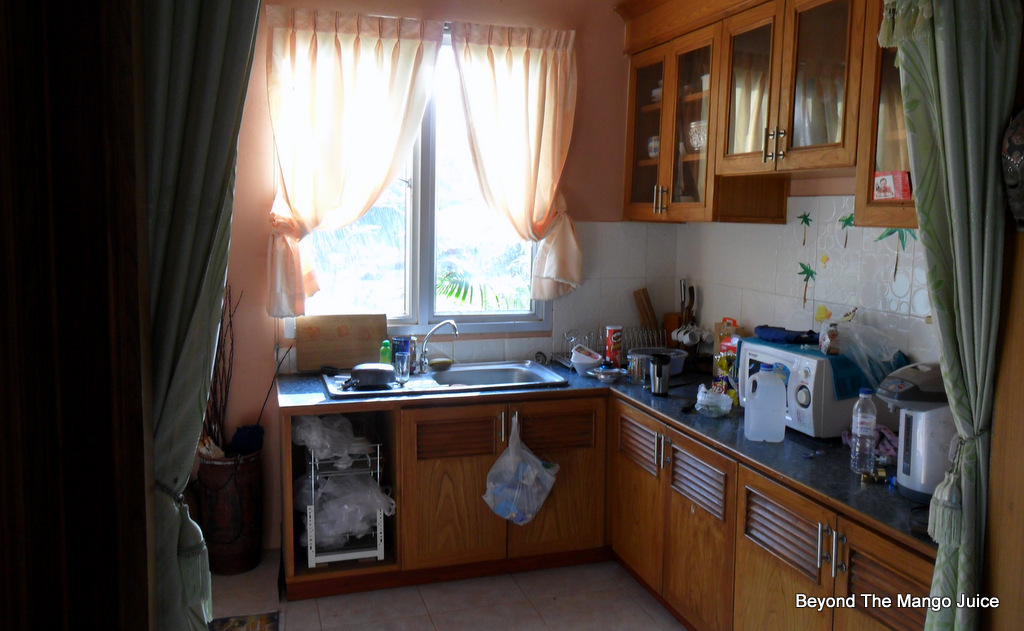 You might need your sunglasses for this photo because the sun was a touch bright when I took it, but as you can see it’s got most things you need in a kitchen and it is fairly tidy too. There was a cooking stove but that got taken out and these days Wilai and I use the kitchen to prepare food and make snacks. Wilai’s mother never uses it herself, it’s way too modern for a woman who thinks a microwave is a greeting from a small child. 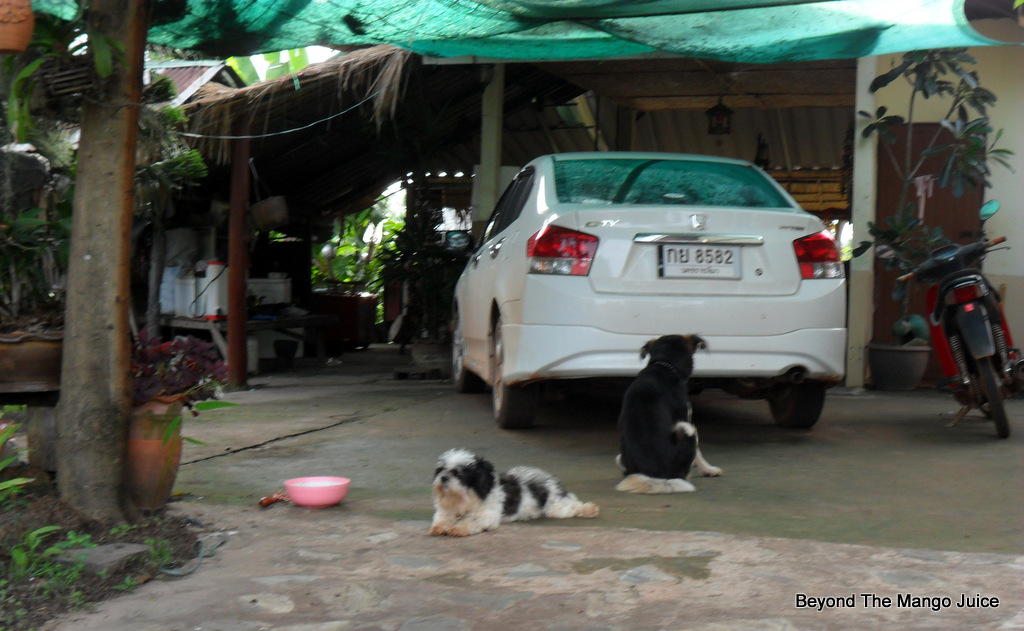 This was originally a car port without a car. Now Wilai’s got a car, she hasn’t got a car port, because it’s been turned into a kitchen area. You get the picture. The area is a bit like Aladdin’s Cave because you never know what you will find in there and if there is an oil lamp, then you can bet your last buck it’ll be broken. It’s a place where angels fear to tread… Hells Angels. Let’s take a peep inside. 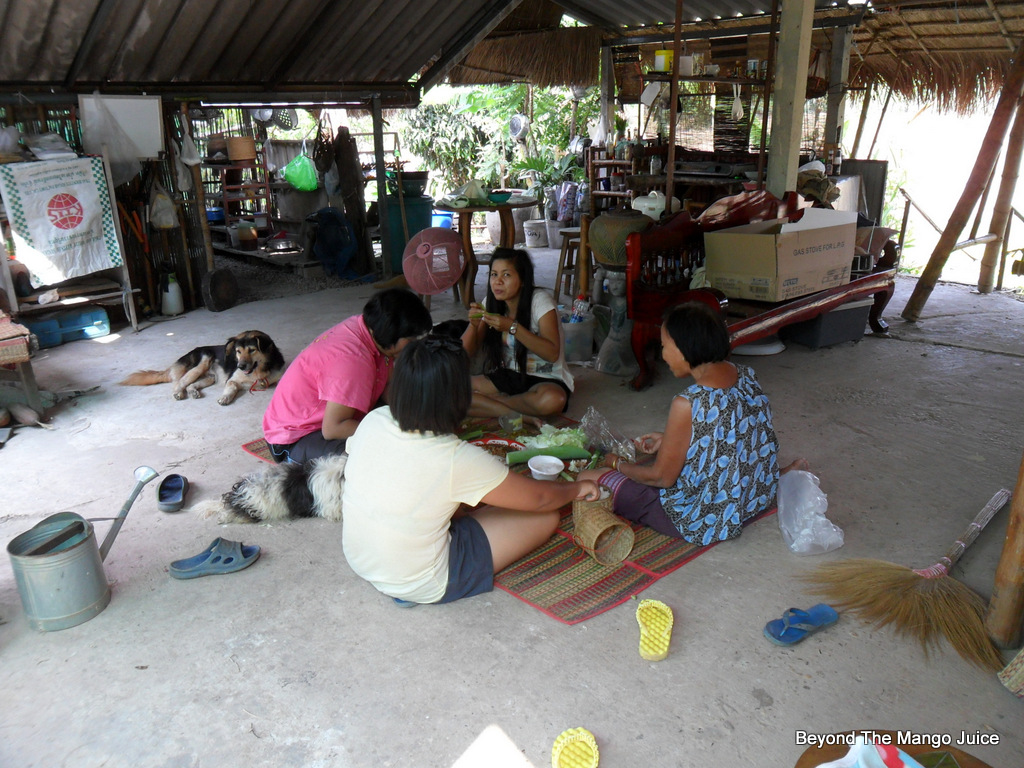 Initially things don’t look too bad. A bit of clutter, but there’s enough room to manoeuvre around the disarray. Let’s zoom in closer, although Wilai doesn’t look too happy about it. I think she knew I was up to something. 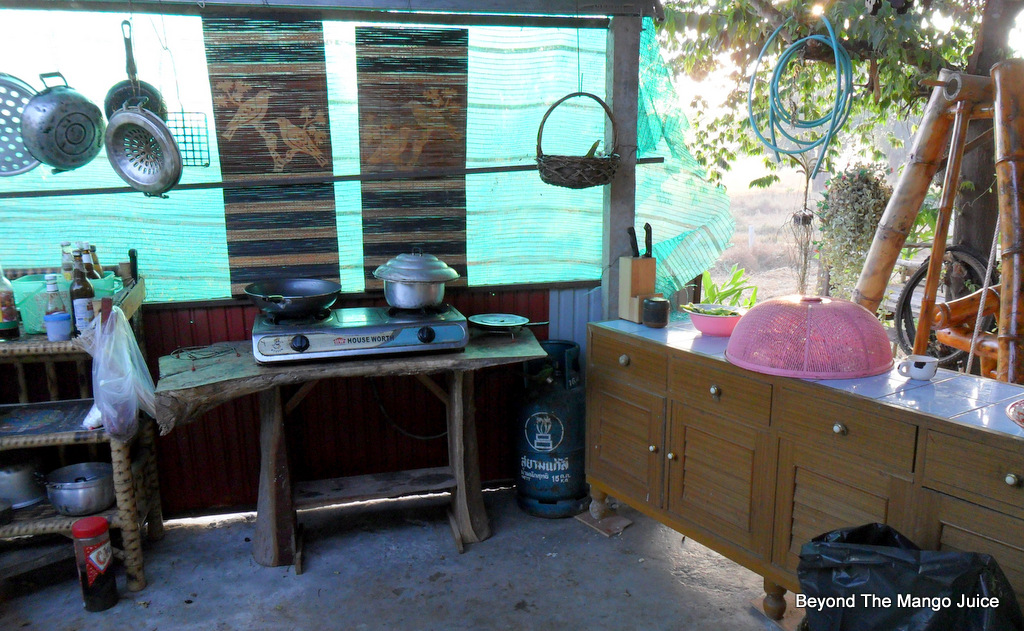 This is not too bad for an outside kitchen, I do use it myself sometimes, but only after I’ve banged a few pots and pans first. The open plan means the occasional snake passes through. 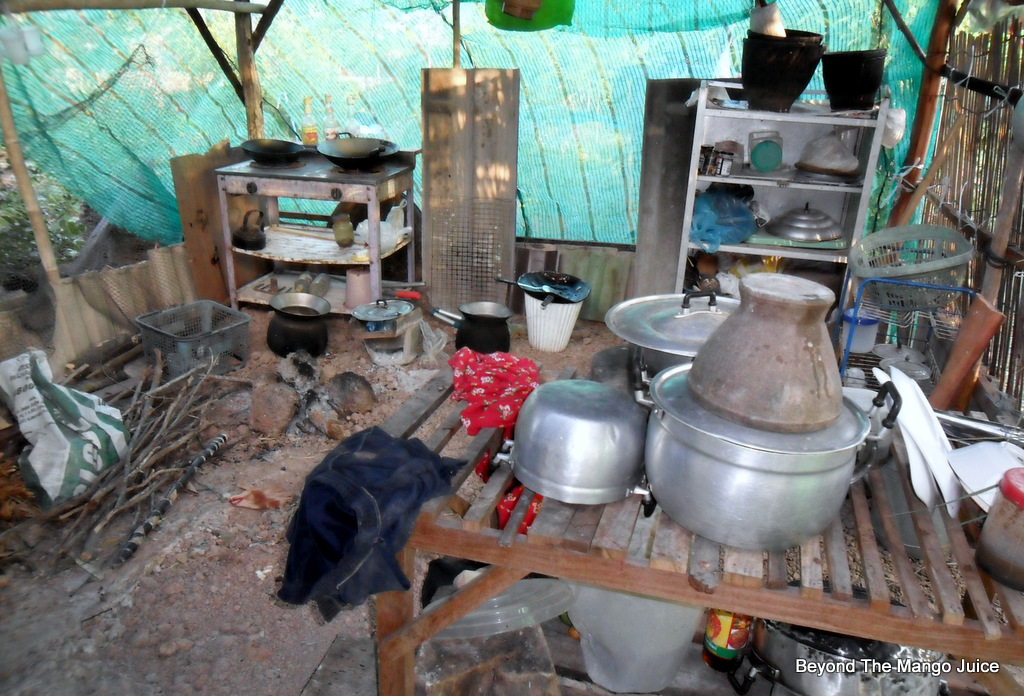 Honestly, a bomb has never hit it. The floor is uneven and everything sinks in to place not fits. Tiger Woods would be forced to take a drop shot if he pitched onto this surface and the geckos that do squat here cling on to whatever with one foot covering their eyes. It’s an absolute mess but like most aged and old-fashioned women, mama is never going to change. It’s a kitchen she feels very at home in.

What about you, have you come across similar kitchens on your trips into Thailand’s rural pastures?