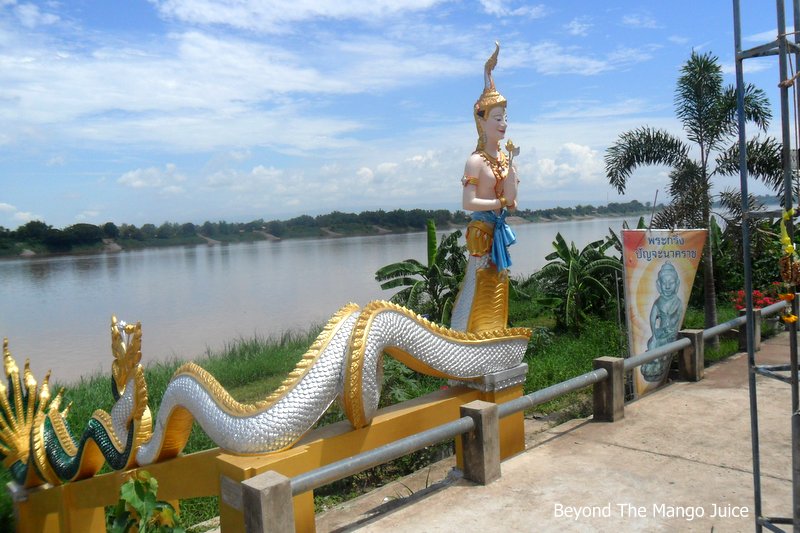 If you have never heard of Phon Phisai then perhaps you should think again. Phon Phisai (sometimes spelt Phon Pisai) is a rural Thai town on the banks of the Mekong River with a breathtaking view of neighbouring Laos. The town is in Nong Khai Province in north-east Thailand and has stretched many journalist’s imagination and steadied a multitude of photographers’ hands. Phon Phisai is the home of Thailand’s legendary Naga Fireball Festival. Now you remember it, don’t you?

Phon Phisai comes alive once a year for its much-publicized Naga Festival. Thousands of Thais descend on this time-honoured town hoping to see its fabled fire-breathing dragon shoot fireballs into the night sky. For the rest of the year, barring Thai festivals, life in Phon Phisai passes by in a very agreeable and no-nonsense manner, aside from its twice-weekly riverfront day market. 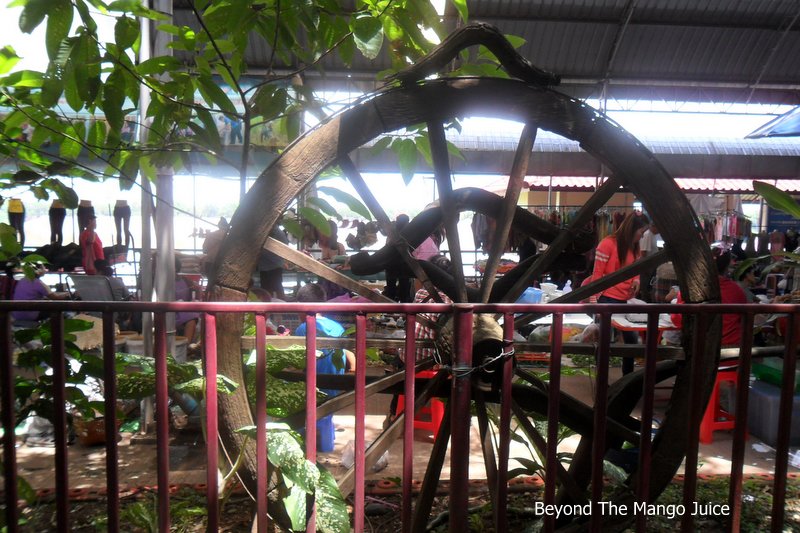 Phon Phisai is a run-of-the-mill Thai rural town apart from its exceptional waterfront view overlooking Laos. The town will never face allegations of overkill about its ‘appliance of Science’. Its mediocrity borders on extraordinary, and its blandness out-of-this-world, and you get the feel Phon Phisai’s ‘Wheel of Evolution’ will never stick on ‘Vorsprung Durch Technik’. Nevertheless, its day market is an impressive affair. 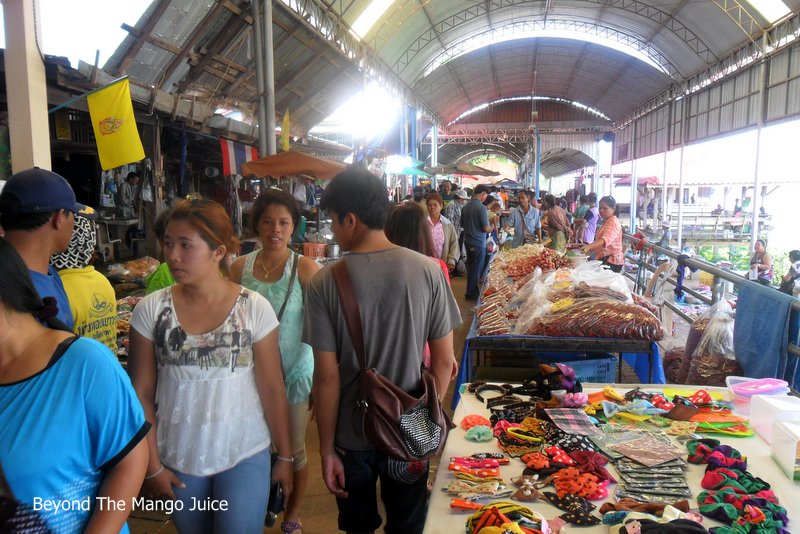 A large portion of the market bustles under an arched tin roof. Raw seafood, meat and mountains of fruit and vegetables mix their aromas underneath to gel a smell that could coax a wry smile from a drain. The odour flares one’s nostrils. The pungent ‘poo-fume’ is akin to sucking hard on a live cattle prod. But, aren’t all Thai food markets like that? 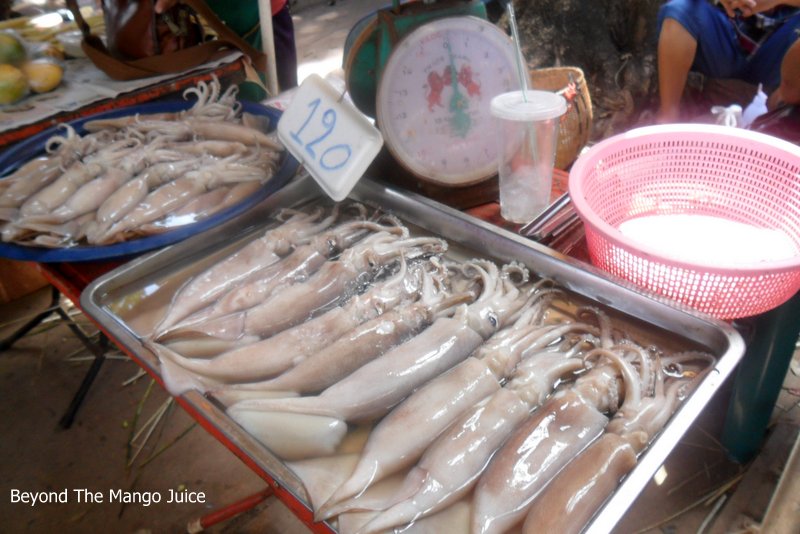 The market sells all kinds of food from fresh fish to hot snacks, if you can eat it, then you’ll meet it at Phon Phisai’s market. Plus, a few things you won’t know what the hell they are. Some of the seafood and fish does look enticingly fresh. 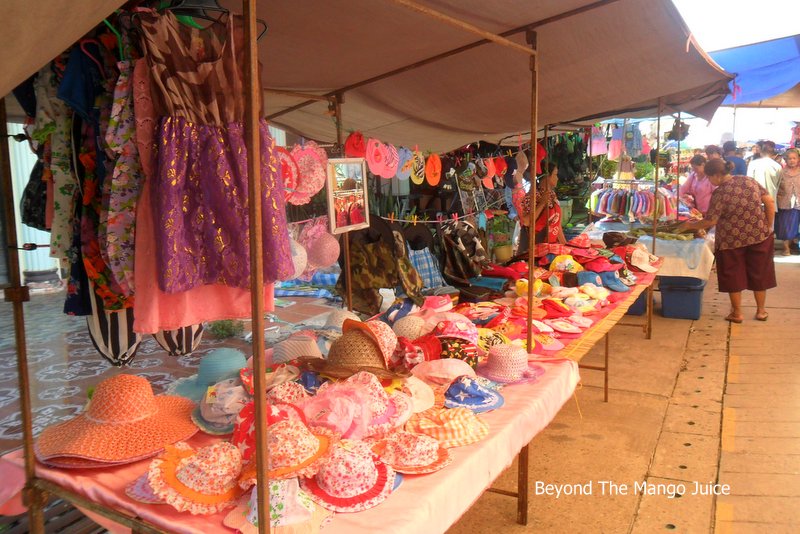 Clothing and their accessories are piled high and racked long at the market in every conceivable colour and a few that’d make a hippie squint. The styles are more beach hut than House of Fraser, but wide-ranging enough to dress the most bizarrely shaped family. 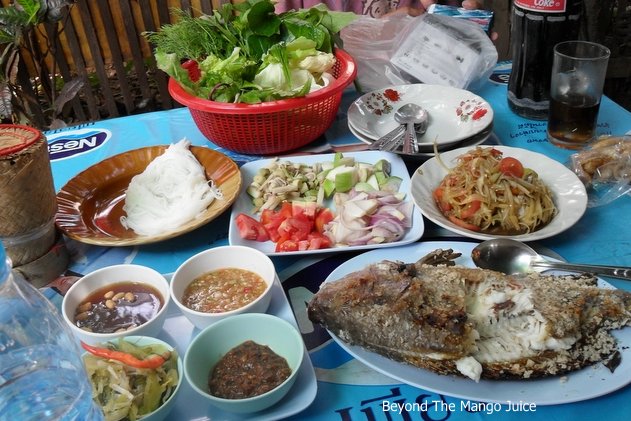 The market has a couple of plastic-chair-wobbly-table restaurants, but luckily we westerners think those quirks add character. A fish meal like that above with a large bottle of beer will only pick your pocket for around 300 baht (US$10). That’s excellent value.

Phon Phisai’s day market is held on Tuesday and Saturday each week, and the market’s drains start smiling from 6 am until mid-afternoon.