Heathrow to Pattaya and Udon Thani in Pictures

My recent trip to Thailand started with an artistic eye-opener at London’s Heathrow Airport followed by four great nights in Pattaya before moving on to 15 days of calm and still in Udon Thani. During that time I took over 700 photographs and I’d like to share some of the more offbeat and also matter-of-course ones with you. I’ve added a photo caption to each picture and a few words of commentary underneath. 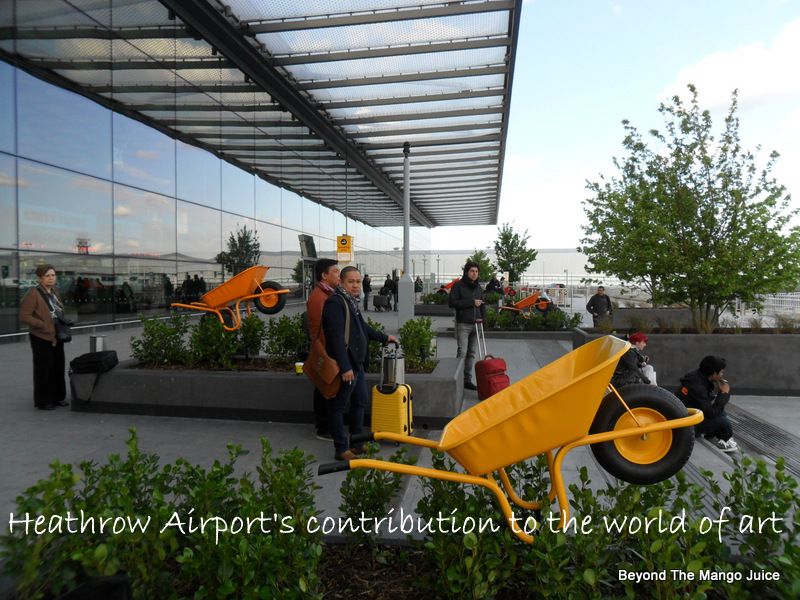 Heathrow is reputedly one of the most modern airports in the world but judging by the wheelbarrows on display outside Terminal 4, one could be mistaken for thinking otherwise. Wheelbarrows floating in the air… what’s all that about? 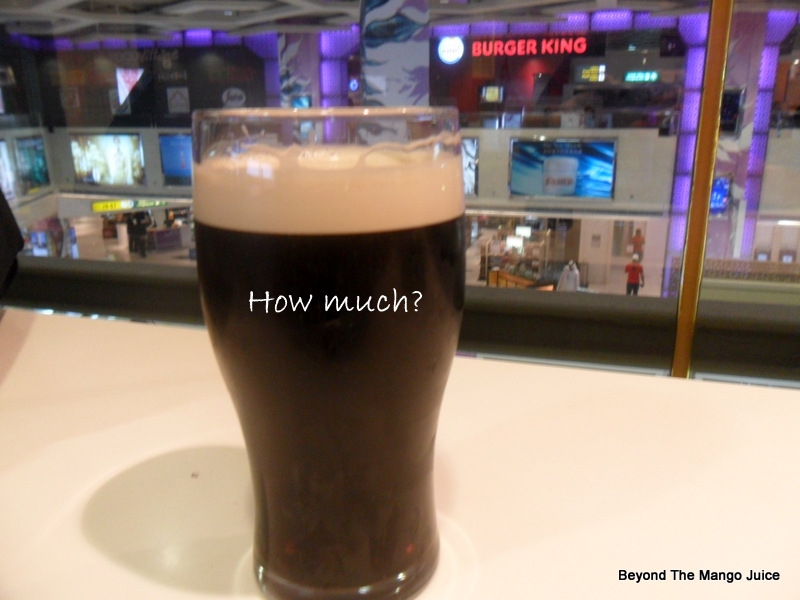 If you’re planning on having a drink at Abu Dhabi International Airport you might need one of Heathrow’s wheelbarrows for your money. A pint of Guinness is £8 (US$12), lager one pound less. There were a lot of sober people milling around at the airport and I restricted my spending to a head shaven and rather bald £16. 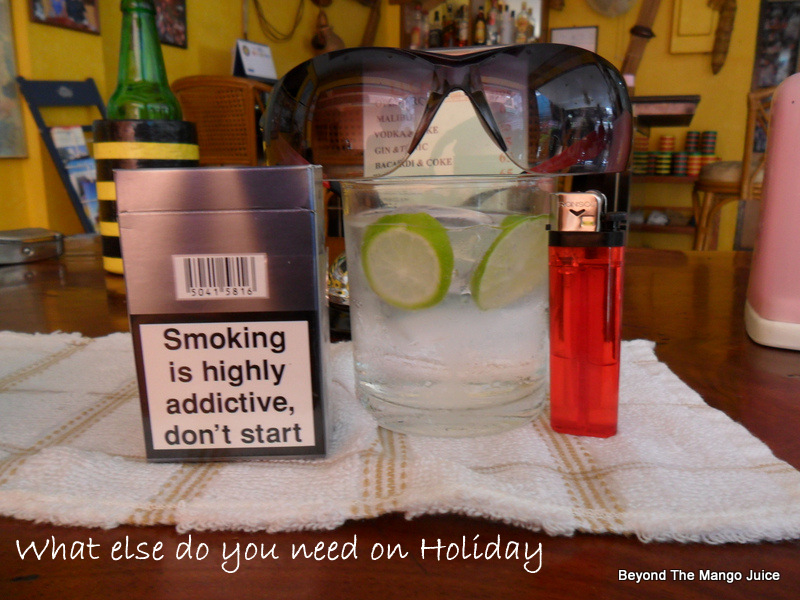 I think this is better than Heathrow’s effort at Modern Art and my drink was a helluva lot cheaper than those at Abu Dhabi. Does a guy on holiday need anything more for a quiet afternoon of self-destruction? 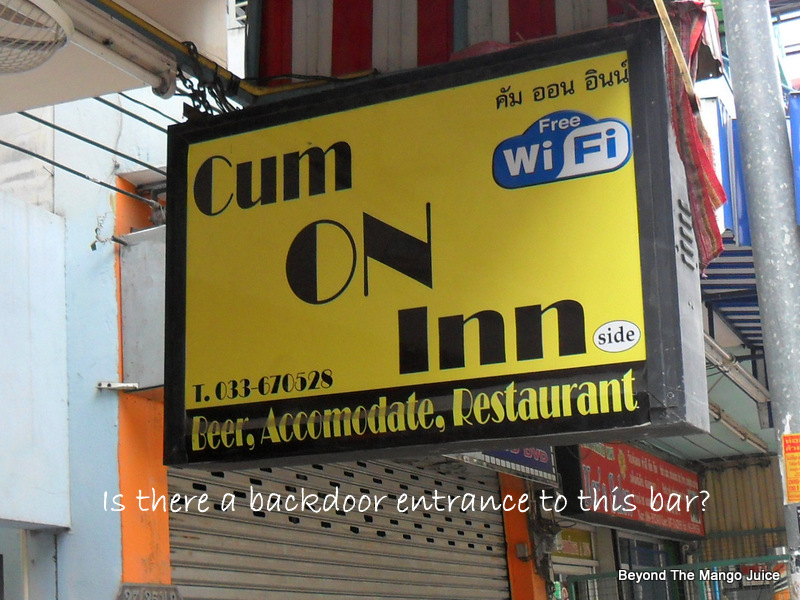 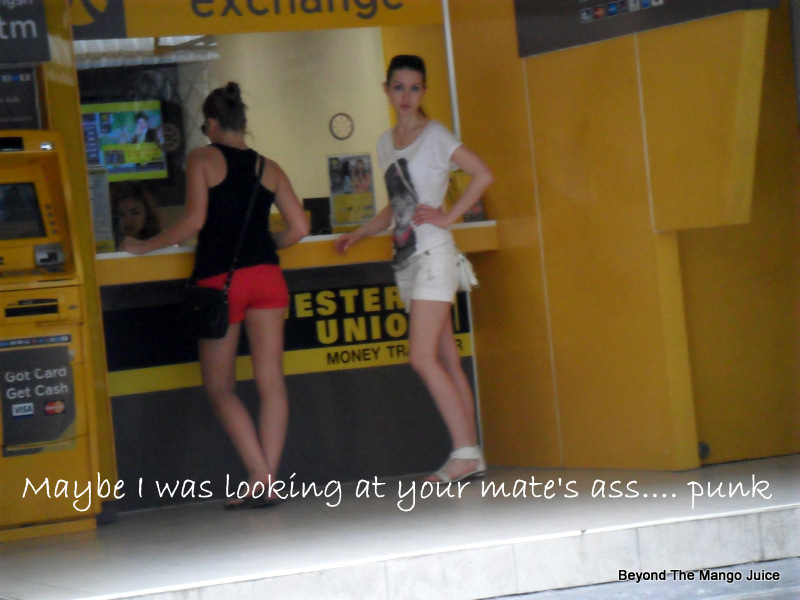 Pattaya was fairly quiet tourist-wise and there weren’t too many cute white girls like these about. My camera struggles real hard to zoom and its cough and splutter must have alerted the chick on the right to its churlish intent. That’s a real hand-on-hip cold stare. 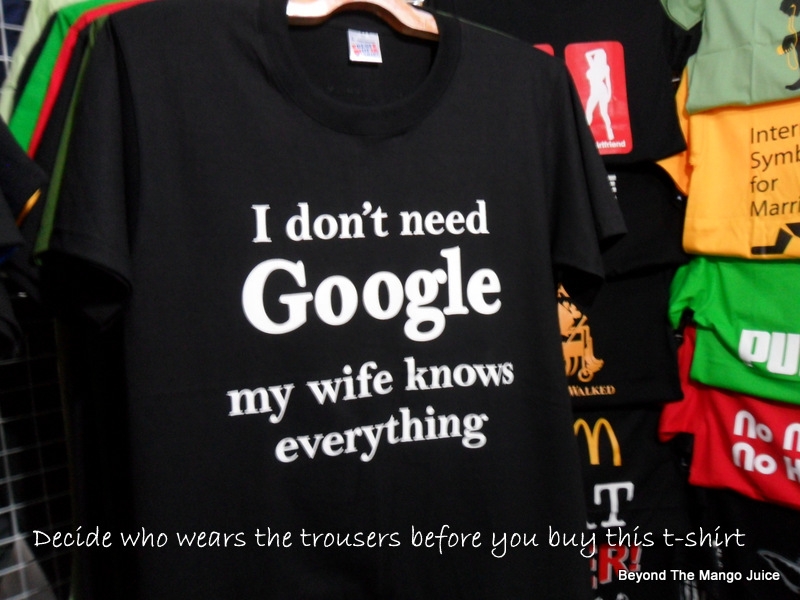 You’d have to be ‘The Boss’ in a relationship to wear this funny t-shirt, or have a Thai partner whose English was embryonic at best. The words would probably be lost in translation, and if not, a sprinkling of Tinglish might save the day. 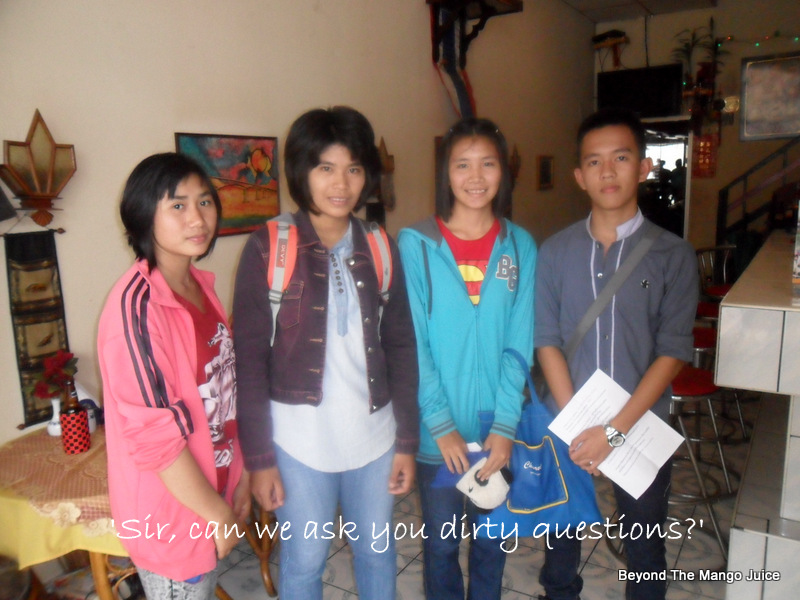 These four Thai youths caught up with me in a bar in Nong Khai and inquired if they could ask me some questions.

‘What kind of questions and how many?’ I replied.
‘Dirty questions about Thailand’ one answered… or that’s what I thought they’d said.

I soon realized that ‘dirty’ was ‘thirty’ and their intention was above-board. They were Thai students on a project to find out the likes and dislikes of a foreigner’s life in Thailand. I was happy to help them out. 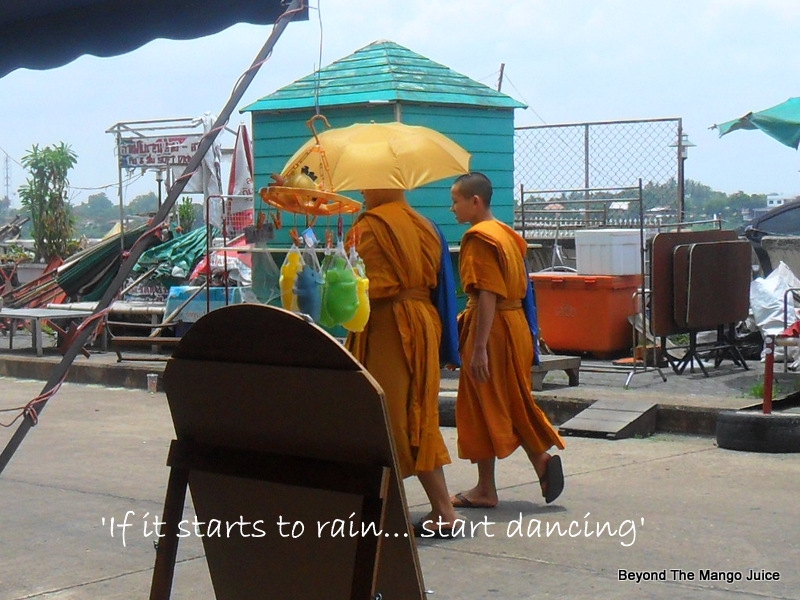 I love taking pictures of Thai Buddhist monks, their robes are so colourful and monks look so out-of-place (to me) in a white-bread urban world. It didn’t rain but if it had I’m sure the pair would have danced the Tango (think soft drink). 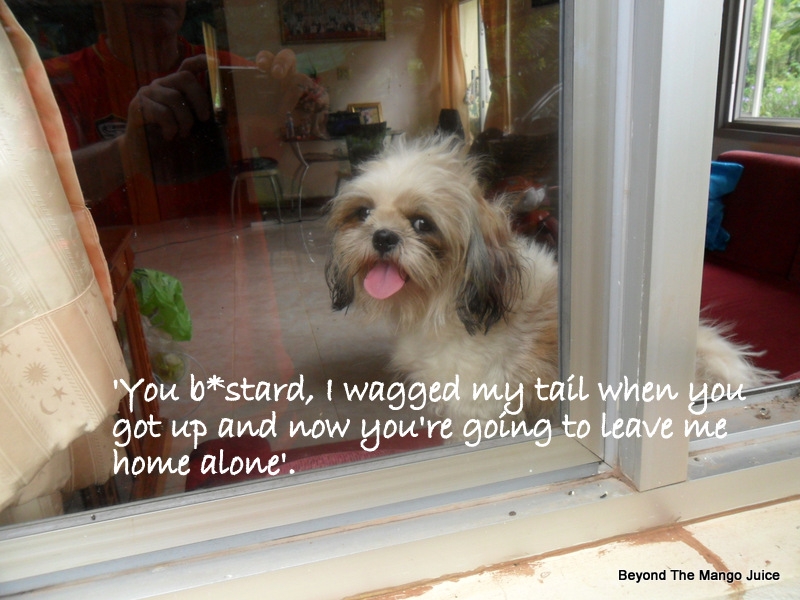 Not all dogs enjoy travelling in a car but our young Shih Tzu absolutely loves the experience. It’s that and the fact that wherever Wilai goes Tang Moo follows suit. Tang Moo tags along on some of our day trips but on treks to markets and traffic congested places she has to stay at home and she doesn’t like that one dog-gone bit. 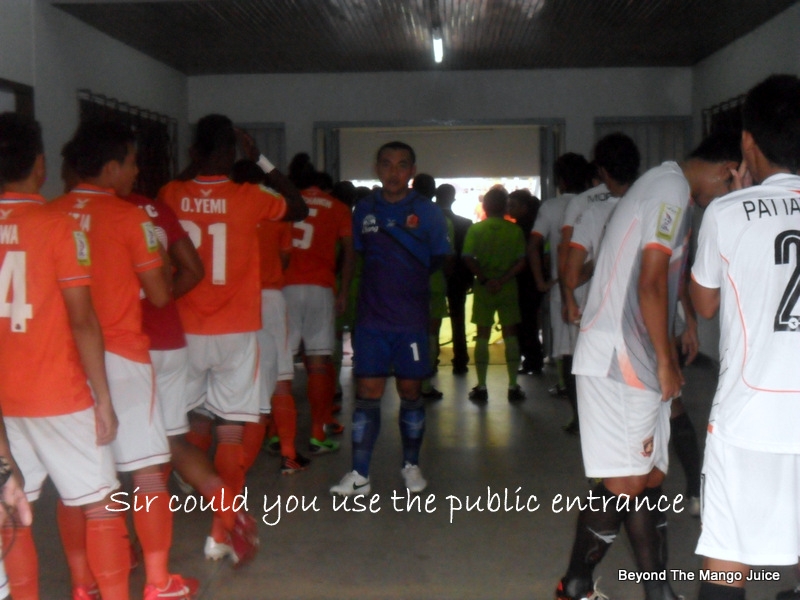 You wouldn’t get this close to Beckham, Messi or Ronaldo at a football match but in Udon Thani it’s different. The entrance to the players tunnel is on the outside perimeter of the stadium in front of the open air match ticket desk and club souvenir stall.

I ventured inside the tunnel and Udon Thani’s goalkeeper (in the blue) appeared to try to stare me back out. The goalkeeper didn’t guard his goal as well once the game started and Si Saket United won 2-1 in front of a noisy 2,000+ crowd. 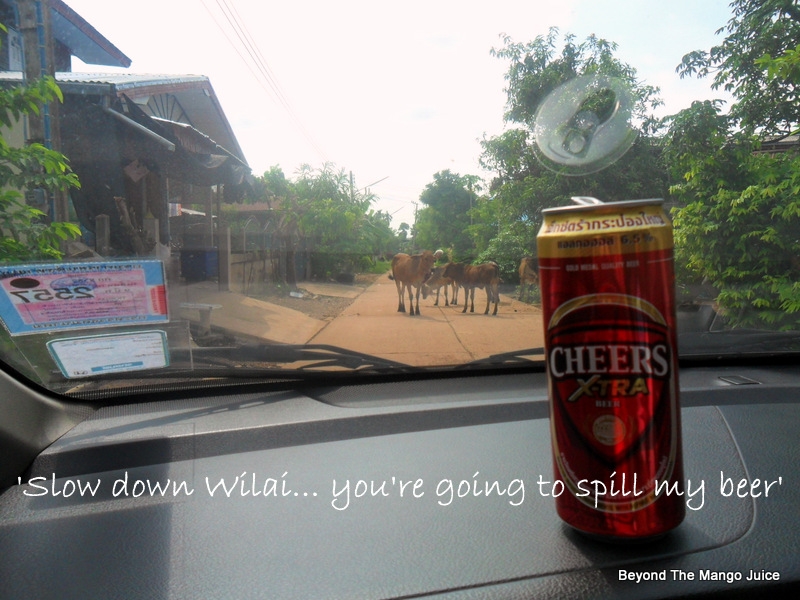 Driving on Thailand’s country dirt tracks and roads means you’re going to come across plenty of scenes like this and I do worry a little about our car getting a bump from a cow or buffalo. Mid morning is a bad time to travel because you’re sure to meet one or two herds.

I’m led to believe that after six in the evening if a cow or buffalo dents your vehicle the animal’s owner is liable for the damage caused. Before that hour it’s a matter of debate and deliberation as to who was in the wrong.

Wilai shouldn’t have been drinking that early in the morning.