There are many modes of transport available for travelling around Thailand’s cities and towns. Taxis, buses, songthaews, tuk tuks and rickshaws are the best known ones. Shanks’s pony is another, although in Thailand like most places in the world, there is always some form of transport ready willing and able, 24 hours a day.

In Udon Thani there’s another type of public transport which is hugely popular, and one that’s been racing around for over 35 years, Udon Thani’s Samlor Spacelabs. 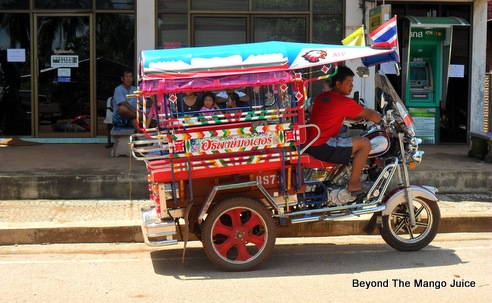 Samlor translates to English as three (sahm) wheels (lor), and the photograph above shows a typical samlor. They were first introduced to Thailand’s roads in Udon Thani Province in the late 1970’s and since their inception they have become a favourite mode of transport in Northeastern Thailand, and to a lesser extent, other regions of the country. Samlors are also called Skylabs and Skyrockets, and there is a simple explanation for those two extravagant names. 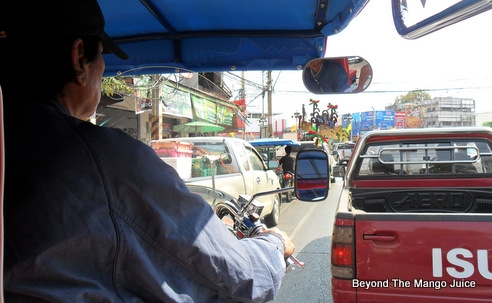 The design of the first samlor is a matter of debate. There’s no doubting it was born from its poorer cousin the rickshaw, but both the Atipong Motor Company Ltd (ATP) and Udon Ake Panich Ltd (APN) make reasonable claims for its conception.

ATP and APN are both based in Udon Thani and are still in business today, but which one first rolled out the samlor blueprint is like a re-run of the causality dilemma concerning the chicken and the egg. The first samlor hit the roads in Udon Thani Province in 1978, but in Thailand at that time patents were not widely known to small businesses and therefore neither company had their thumbprint on the design. So, where does ‘Skylab’ and ‘Skyrocket’ fit into all of this?

Skylab is the name given to the model of samlor shown in this post, and is the type used as a taxicab today. The name is linked to NASA’s first space station, Skylab, which orbited earth from 1973 to 1979. Skyrocket is a pseudonym affectionately given to the vehicle. Skylab samlors are also tagged as Sport Tuk Tuks and their price is around 60,000-80,000 Thai baht. 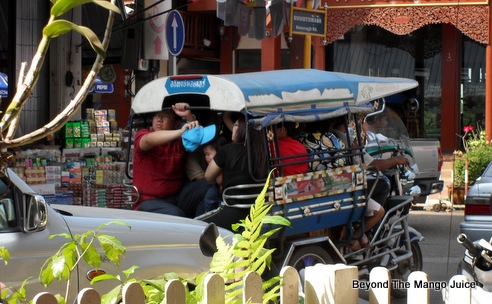 In cities like Udon Thani, samlor drivers lie in wait outside shopping malls, supermarkets, bus stations and day markets in anticipation of their next fare. Sometimes you’ll see 20 or so of them lined up, and that’s good news, because you can then barter a more reasonable price. The photo above is from Nong Khai and shows how practical a samlor ride can be, although on a hot day you wouldn’t want to be stuck in the middle. There’s at least six adults and a small child jammed in there.

The fare for a samlor ride can vary greatly, not just on the length of the journey, but also on the driver’s mood, so it’s always wise to settle on a price before you step foot inside the hooded cab. If the driver thinks you’re a tourist, in a mad rush or plain stupid, they may try to hike the price. 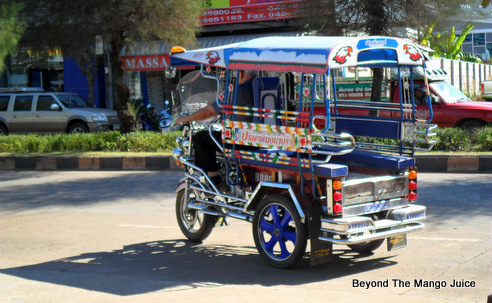 Many people refuse to take a samlor ride, considering them to be dangerous due to their supposed three-wheel lack of stability, and their drivers general reputation for a fondness of alcohol. There is some truth in the latter, but, I’ve seen no bias toward a lack of balance, that’s in the vehicle, not the driver. Their mobility to weave through traffic is a godsend, and I’ve usually had far more to drink than the driver has.

I consider a ride in a samlor to be great fun and they are my favourite mode of transport in Udon Thani. They are an inexpensive form of travel, and on heavy traffic days can be more speedy than a bus or car. What’s your favourite type of city travel in Thailand?[dublin-core-metadata]