Western people are genuinely fascinated by the merest mention of Thailand and insects. Thais eat insects, they are considered to be a delicacy but westerners, bar one or two, find Thais penchant for insects a bit quirky, and a peculiarity and curiosity that’s hard to ignore. 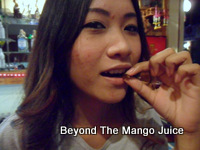 I’ll admit I find the smell of freshly cooked crickets, grasshoppers, beetles and giant water bugs quite repulsive, but I’ve always thought, and still do, that Isaan and its people aren’t going to change their eating habits to suit me.

The foul odour of insects frying in a wok may roll my stomach over, but there is one particular Thailand insect which although it’s eaten by very few Thais, I try to avoid even more. Thailand’s winged mang mao insects. 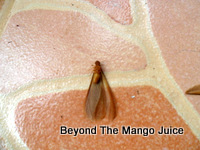 Thailand’s rainy season is from May to October and mang mao insects take flight at night after heavy rainfall generally during May and June. The insects fly in search of new breeding grounds but will swoop in their thousands on a brightly lit house through an open window or door. Bright lights are an invitation for these winged insects to seek and explore.

Mang mao are eusocial insects, termites with reproductive queens, soldiers and workers in their three caste colonies. The caste which is a real ‘pest’ are from the reproductive group (the workers and soldiers are wingless), and they take flight in a huge swarm after heavy rainfall to mate and pair off in search of soft ground to burrow into and start a new colony. The termites need the soil’s moisture to survive but the lure of bright lights often leads to the eradication of a large part of the swarm. If they don’t make it to moist soil or dampened wood they die within a very short time. 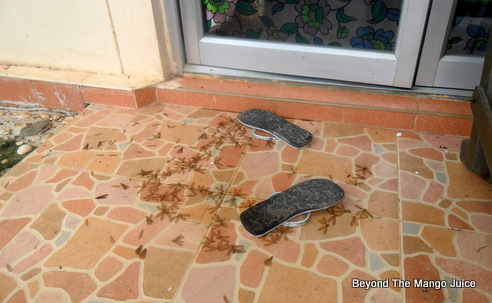 The insects are harmless enough, but very annoying because a chink of light shining through a tiny gap between two closed doors is enough to attract them and let them squeeze through in their scores. If your doors and windows are sealed tight you’ll find a mass of them lying dead outside in the morning. 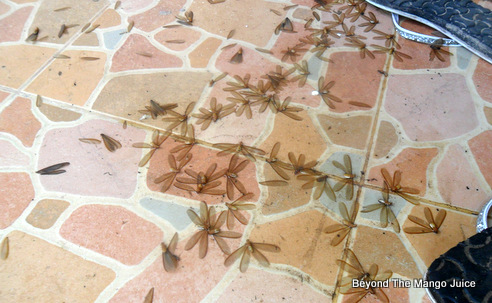 The insects do have their use in ‘waste not want not’ Thailand, especially in rural areas. Villagers sweep up the clot of the dead, dying and damned termites and feed them to chickens and fish. Birds and geckos feast on them too. 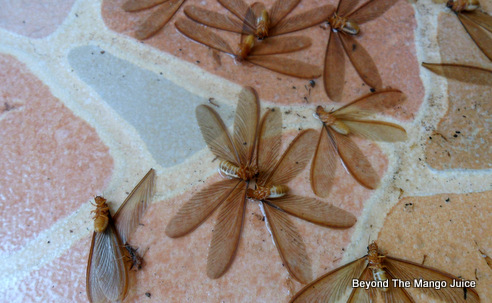 The only good thing I can say about Thailand’s mang mao insects is they only take flight around the wet months of May and June. Any longer than that and Thailand’s kamikaze termites would be intolerable. What’s your experience of Thailand’s wide-winged mang mao insects?