There’s a ‘hole’ lot of trouble brewing at the moment concerning a Thai advertising campaign for Dunkin’ Donuts Charcoal Donut. The advert for a chocolate flavored doughnut features a white-skinned model with a blackened face and bright red lipstick and the advert has been labelled bizarre and racist by Asia’s non-governmental organization Human Rights Watch. 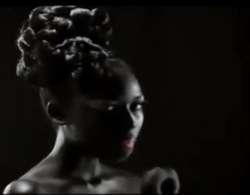 The advert  starts with a white-skinned woman biting into a chocolate doughnut and within moments she’s transformed herself into the dark-skinned lady pictured on the right.

The advert has been called racist because it’s viewed by many as a throwback to the stereotype image associated with black women during the period of African-American slavery. I must point out the commercial was made by a Thai franchise of Dunkin’ Donuts and not by the American global doughnut company themselves. Nonetheless, the commercial is a big hit in Thailand itself. Take a look for yourself… that’s if the video is still available because controversial ones like this do often get withdrawn.

The commercial will have not made a blip on Thailand’s racist radar because when it comes to skin colour their general views have some logic to them. A lighter skinned Thai is seen as being wealthier than one with darker skin and it’s understandable why. A Bangkok air con office worker will have (there’s always exceptions) a lighter skin tone than someone who slaughters themselves under the hot sun in a rice paddy field, and money wise, the office worker will earn far more than the rice laborer. Let’s get back to the Dunkin’ Donuts video.

Personally, I don’t see anything wrong with the video, then again, maybe I’m naïve when it comes to racism. I read the video like this – A white-skinned woman bites into a chocolate covered doughnut and turns into a chocolate coated beauty. That’s clever marketing unless you’re a perpetual do-gooder or anti-racism campaigner. Let’s look at the advert in reverse.

Imagine the commercial like this. A dark-skinned woman takes a bite from a milk chocolate coated doughnut and is transformed into a white-skinned woman. There would be outrage over that and I can understand why, but my point is, if one is racist then surely the role reversal is not. Or am I being naïve again?

Below is a poll which asks the simple question ‘Do you consider Dunkin’ Donuts chocolate doughnuts advert to be racist?’. I’d like each and every one of you to think carefully about the content of the video and then kindly register your vote.

My vote was for the two letter answer of which the second letter was perfectly doughnut shaped.

Thank you for your vote.[dublin-core-metadata]