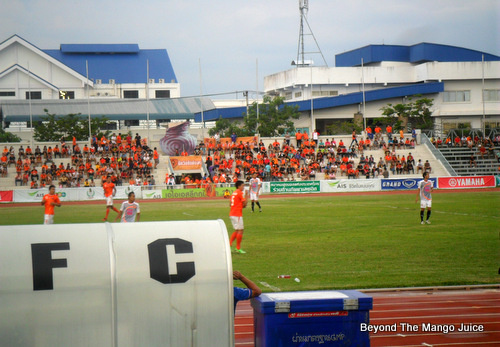 If you think the post title is a bit trumped-up then think again because Udon Thani football club have reached the Champions League…. even if it is a Thai version of football’s great European football competition.

Udon Thani F.C. (nickname the Northeast Giants) currently play their football in Thailand’s North East Region Division Two and their 2013 league campaign has just been completed with the team finishing in second place and qualifying for the Division Two Regional Champions League end-of-season tournament which features 12 teams split into two groups.  Each team plays 10 games in their group with the top two from each promoted to Division One.

The teams competing in the two leagues are:

Udon Thani start their Regional Champions League Group B campaign today (Sunday October 6) at the 4,500 capacity Boonsom Martin Stadium, home to Sukothai F.C. and the Northeast Giants will be hoping to return home with at least one point in their Champions League travel bag.

The players have a tough task ahead if they are to come out top dogs in a group which contains Chiang Mai F.C. who boast a 25,000 capacity stadium and a huge fan base. In comparison, the Institute Of Physical Education Udon Thani Stadium is home for the ‘Giants’ and the ground can hold around 3,500 fans. 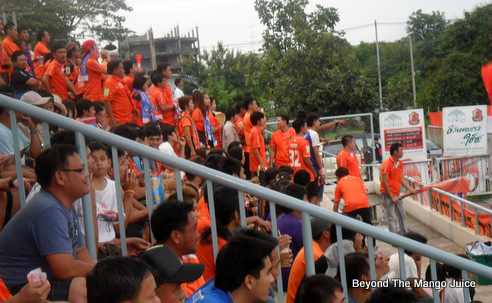 The club’s matchday facilities, fan base and financial backing are basic, but on the playing pitch the club proudly takes its place on merit among the likes of Ang Thong F.C. and  Paknampo NSRU F.C. in a group of teams that could easily be misread as a Group of Meth and not world football’s more lip-smacking Group of Death.

Beyond The Mango Juice wishes good luck to Udon Thani football club in their quest for Champions League glory and promotion to Thailand’s Football League Division One. The club currently does not have a website but their Facebook fan page can be viewed here; UDFC Fanclub.[dublin-core-metadata]