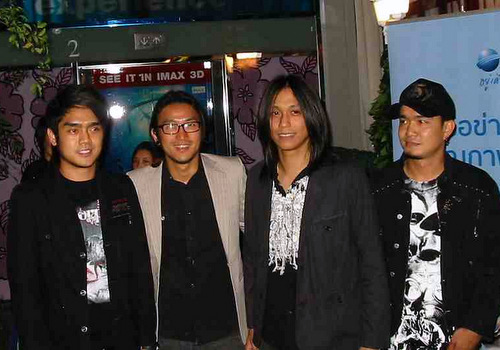 Thai rock band Bodyslam are heading a list of top ASEAN bands at a MTV EXIT (End Exploitation and Trafficking) sponsored free concert in Udon Thani on 15 March. The concert line-up will be topped by multi-platinum rockers Bodsyslam and supported by Thai bands Slot Machine, Yellow Fang, Kala and Thaitainium, as well as Lao rock groups Cells, Kai Overdance and other top ASEAN music artists too.

The charity event is being staged to heighten awareness and educate young people in Udon Thani about the dangers of human trafficking. Music is the weapon being used to blast out the MTV EXIT anti-trafficking message to Udon Thani’s young generation in an area of Thailand where poverty is widespread, and both child and adult trafficking is common-place in the construction, industrial, nightlife and sex industries. Bodyslam and their fellow music stars will hopefully help chorus an end to forced labor and human trafficking in Thailand and the world as a whole.

MTV EXIT Live in Udon Thani” takes place at the Udon Thani Football Stadium on 15 March 2014. Gates will open at 17:00 and to pre-register for free tickets, go to www.mtvexit.org. Free tickets will also be available to pick up from Central Plaza, Udon Thani, between 16:00-20:00 on the 7, 8 and 9 March. Supplies are limited!

Nok Air, Central Plaza, MCOT and TQPR are official partners of MTV EXIT for the event.

Below are a couple of quotes from the MTV EXIT website announcement of their big charity music event in Udon Thani.

“The fact that ASEAN’s top artists are pledging their support for the MTV EXIT campaign is testament to how the fight against human trafficking is gaining traction in the region.” – Matt Love, Director, MTV EXIT.