Cheap Charlie is an expression that is universal, and one voiced daily worldwide to people judged to be a penny-pinching skinflint. The phrase needs no further explanation as I’m sure most people have heard it spoken about someone, and a few, rightly or wrongly, have been called it themselves.

Cheap Charlie are words often expressed by Thai bar girls about westerners who visit the bars where they work. The turn of phrase is usually directed by bar girls toward punters who don’t tip or appear tight-lipped in conversation – but just as much, ‘Cheap Charlie’ is used as a tease and verbal bargaining-chip to squeeze drinks, snacks and tips from punters. The words are commonly heard around the bars of Bangkok and Pattaya but are also jargon used in similar types of entertainment flesh-spots throughout Asia. Vietnam is one such country, and its graphic nightlife scene has its own Cheap Charlie song which dates back to the Vietnam War. 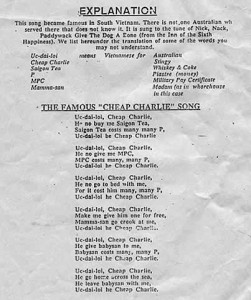 The song is known to all Australian Vietnam War Veterans and was gifted to them by Vietnamese bar girls as a tease to seduce more money from their military R&R pockets. Click on the photograph to enlarge and view more details about the song, its seed and lyrics.

The Cheap Charlie Song originates from South Vietnam, and some of the words and local dialect used in its verses are explained in the photograph, but for easiness, I’ve listed them below in more depth.

The video of the Cheap Charlie Song was filmed last year on ANZAC Day at Tommy’s Sports Bar in Vung Tau, Vietnam and is a captivating and funny slice of humour. The bar is a well-rated restaurant/bar, and the performers in the video are honest-working staff having a little fun.