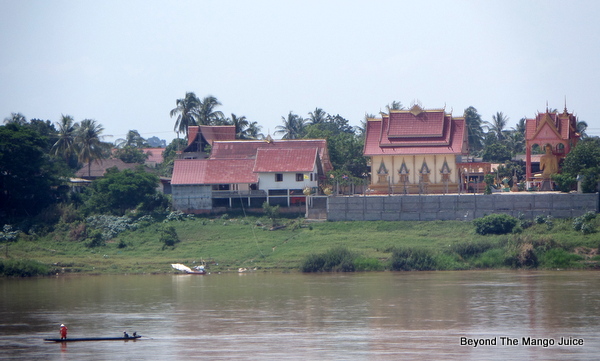 Nong Khai is one of Thailand’s gateways to Laos. The city sits on the banks of the Mekong River and is a slow-paced, easy-going place with a massive riverfront day market, a score and more of temples and a take-it-easy view across the Mekong to neighbouring Laos (pictured above). The field of vision across Thailand’s great river isn’t good enough to rape your senses but is enough to draw a deep breath of contentment or two. Nong Khai is a lovely city to visit.

Ban Na Nam Chum is a small village in Udon Thani Province. And if Lime’s light has ever shone on it, then please drop me a line because I must have slept through its 15 minutes of fame.

A Day Trip to Nong Khai

Wilai and I, along with her cousin Goon and our best-behaved dog, Tang Moo, set off from our village home for a day trip to Nong Khai and its famous Tha Sadet day market. 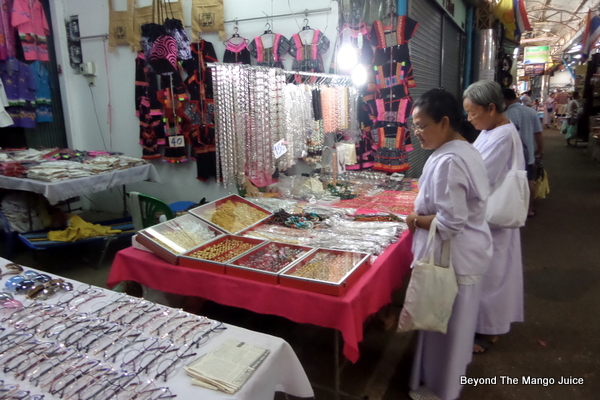 I once described Nong Khai’s Tha Sadet Indo-China market as Amazon.com on the Mekong because the market sells everything made under the sun and plenty of things melted by it.  On display in the picture above are eyeglasses and jewellery. I’m not sure of their quality and standard but would guess they’d give a wise owl eye strain, and a Mississippi farmhand a green neck. I did wonder if the female monks were merely eagle eyeing the necklaces and pendants or putting together an eBay order. 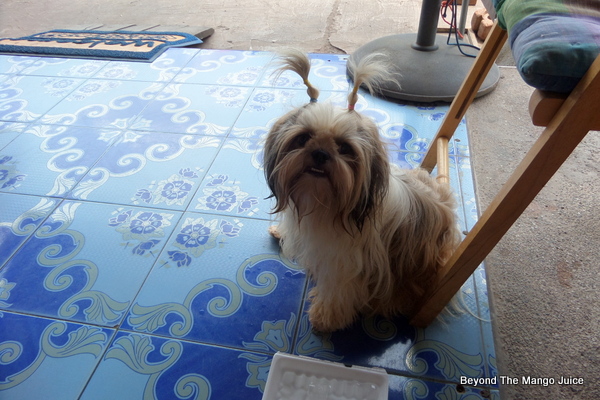 My role at the market was dog sitter at the Rimkong Restaurant. The idea being, the girls, shopped till they dropped, and I drank until told to stop. I was happy with my side of the coin. And Tang Moo was a well-watered and well-behaved companion. I did try adjusting her antennas to improve the restaurant TV picture, but the ploy didn’t work. 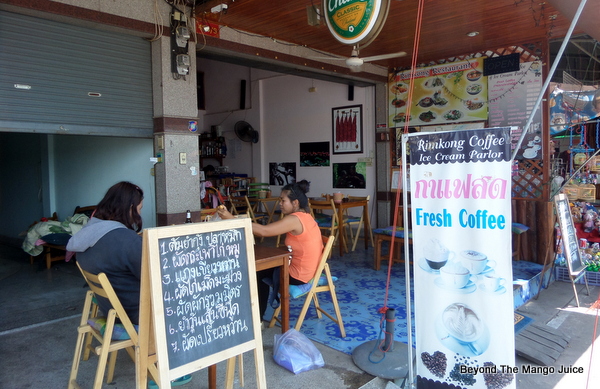 After about two hours shopping the girls returned, and we all settled down for a bite to eat before setting off on our journey home. The Rimkong Restaurant has a decent, reasonably priced Thai and Western menu. The riverside view is a welcome freebie. 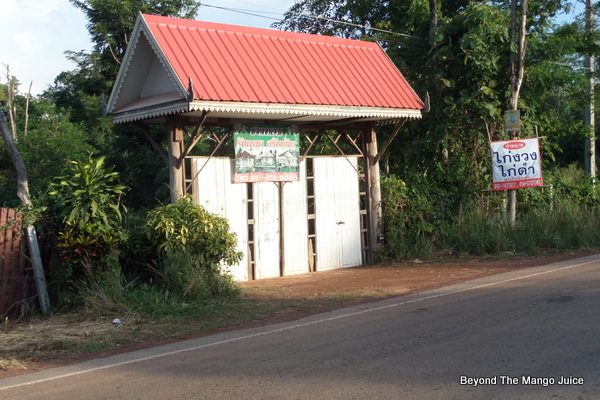 Our journey home from Nong Khai to Sang Khom District is about 65 kilometre.  On the way, we pass through the nondescript looking village of Ban Na Nam Chum. It was here Wilai pulled the car to a stop and with a look of excitement, got out the car, and walked over to the gate pictured above.

For the past year, Wilai has tried breeding kai yeepun (Japanese chickens). She called me over and explained the sign on the gate said ‘Turkey Farm and Japanese Chickens’. I immediately felt the wallet in my pocket curl into a tight ball and burrow deeper inside my shorts. I knew this would cost me money. 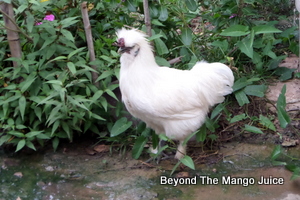 Our taps and bangs on the doorway went unanswered. Wilai pointed out the farm’s telephone number on the gate and decided to ring it. She discovered the Turkey Farm owners were shopping in nearby Amphoe Phen and would be returning shortly. They suggested we wait inside the farm.

Thus far, Wi has bought two pairs of Japanese bantams, but three of them (all hens) had died. The sole survivor is a male (pictured right), and she wanted two more hens to breed with the existing rooster.

The chickens, dependent on their age, cost around 700-1500 baht a pair and once again we’d split the cost 50-50. So far, our joint venture had produced three fried chicken meals but no eggs. 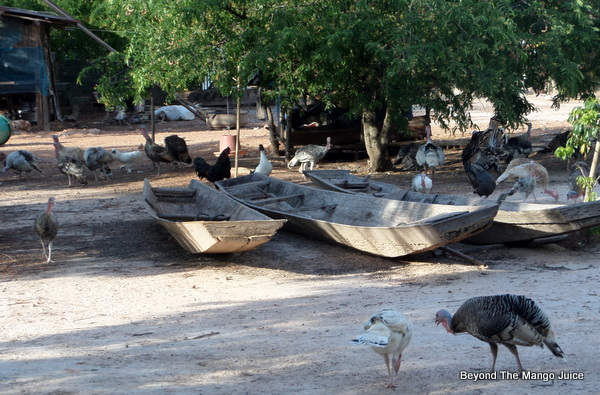 There were turkeys everywhere, at least 100 or more, and three beached boats far from any water. The boats intrigued me as they didn’t seem to be nesting boxes – there were no bird droppings in them, and they had the look of sea vessels washed ashore and abandoned. I never did find out their purpose or where the nearest river was. 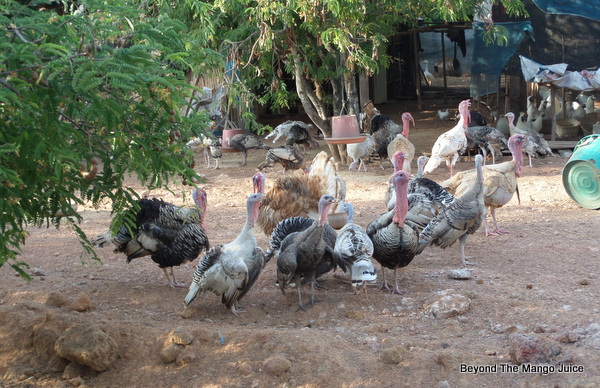 I hadn’t realised that turkeys came in so many colours – the only ones I’d seen before were oven roasted and their brown hue regulated by the amount of Christmas sherry the cook had drunk. They are very theatrical looking creatures. 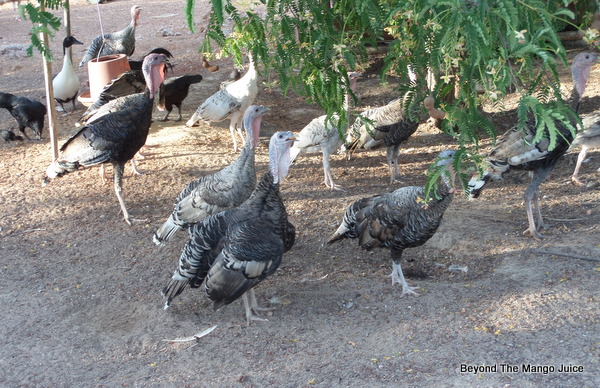 Turkeys are not that common in Thailand, and they’re not a bird Thais eat, not to my knowledge anyhow. However, there was no sign of any Japanese bantams, so we decided to have a snoop around and see if we could find some. 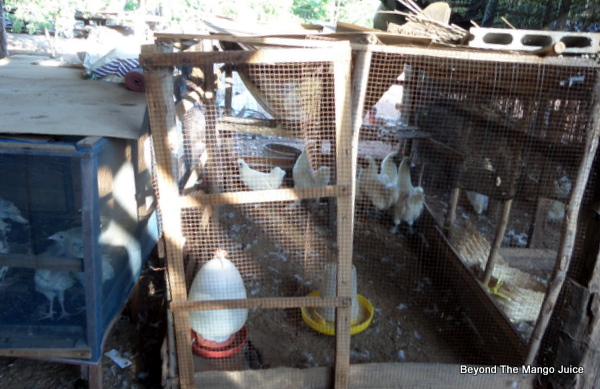 There were a lot of nesting houses in one corner of the farm with various breeds of chickens and other birds inside.  Two of the pens housed Japanese bantams.

Birds In a Box 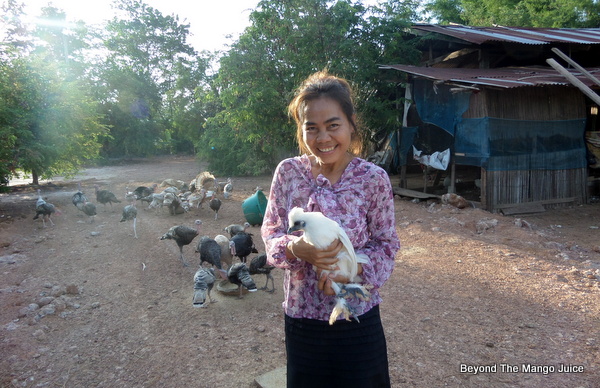 The owners (a married Thai couple) eventually turned up, and we agreed on a price of 1000 baht for two Japanese bantams. The couple set about catching them – the chickens in the pens were not yet ready for sale. Nonetheless, there were some kai yeepun roaming about the farm. After 15 minutes of fun and frolics, they finally managed to net two birds. 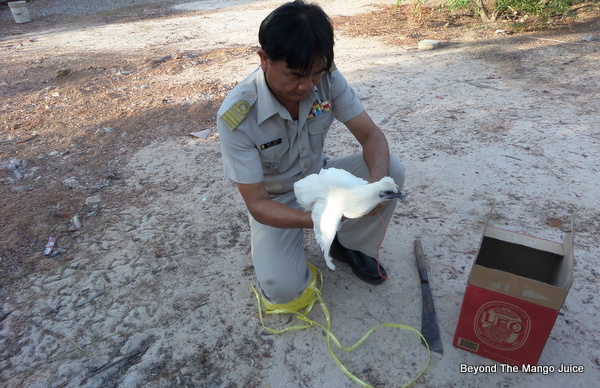 The man gently squeezed both bantams inside a Beer Leo box. We paid for the birds, bade farewell and then headed home. On our journey, Wilai talked optimistically about our Japanese assets while I pencilled a reminder in my notebook to Google the recipe for barbecued chicken dim sum. 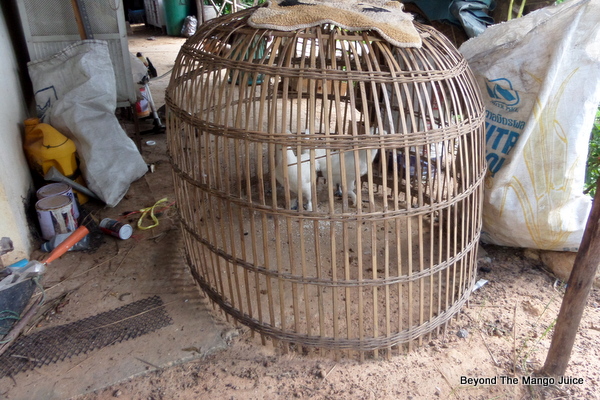 Once we arrived back home, Wilai put the two hens inside a bamboo cage. The cage was a temporary home to stop the chickens from running away. Also, to get them used to the smells and sounds of their new surroundings. It gave me the chance to ask Wilai a question I’d put to her on the previous two occasions we’d bought Japanese chickens. Her answer didn’t surprise me because I’d heard the same answer twice before.

She flashed a ray of brilliant white teeth and answered;

Maybe our Japanese bantam venture does have a hope of succeeding, especially with a shrewd businesswoman like Wilai running the show.