Sang Khom Udon Thani – One Horse and No 7-Eleven

Sang Khom in Udon Thani Province is a typical small Thai rural town. It’s not to be confused with Sang Khom in Nong Khai Province – the latter nestles on the banks of the Mekong River with a splash of tourist appeal. Udon Thani’s Sang Khom sits among rice fields and is a rustic cornball kind of place.

I once described Sang Khom as a one-horse town. That was unkind. Sang Khom is backwoods, Boonie turf with low-key, laid back attitude. It’s also the nearest town to my base when I’m in Thailand and a place I’ve grown to appreciate. 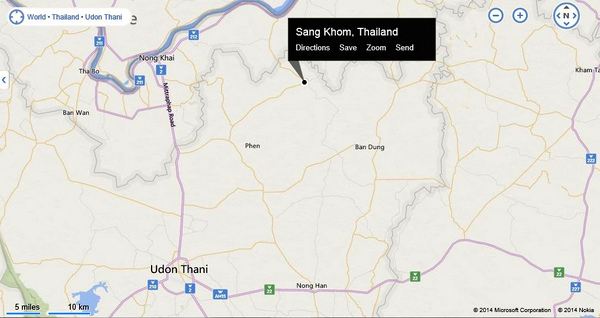 Sang Khom is 65 kilometres from Udon Thani and lies roughly in the middle of two more substantial towns, Amphoe Phen and Ban Dung. Nong Khai city is about 55 kilometres away and Phon Phisai about 30 minutes by car.

You’ll not come across many towns in Thailand that lack a 7 -Eleven. Sang Khom is one and deserves a brand name convenience store. The company which operates 7 -Eleven franchises in Thailand may reason a farmer’s sticky rice diet, and their meagre budget doesn’t accommodate hot dogs, burgers and Slurpees. I’ll admit I’ve never seen a rice worker chewing a burrito, but convenience stores gear-up toward young mothers, teenagers and most adults under 60. There’s plenty of those about in Sang Khom. Just ask Tesco Lotus. 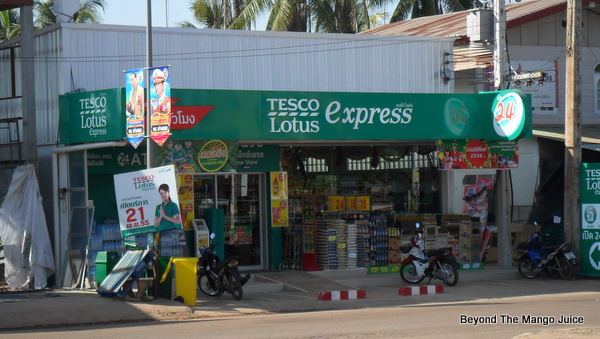 Last year Tesco Lotus opened an express store in Sang Khom. Business is good. The store ticks along nicely and most of the locals seem to view it as a beneficial addition to the town. Market diehards may never see it that way, but for every old-timer, there’s a new kid around the block. 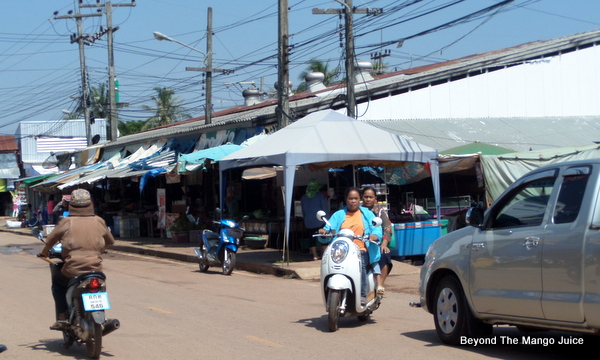 Sang Khom has a market in the centre of town. The market is a daily affair. In the main, it sells fruit, vegetable, meat and fish. Nothing too grand, but the market is the hub of Sang Khom day-to-day life. That only changes on Thailand’s two big Buddhist days each month when a bigger market springs up down the road. A short walk from Tesco Lotus. 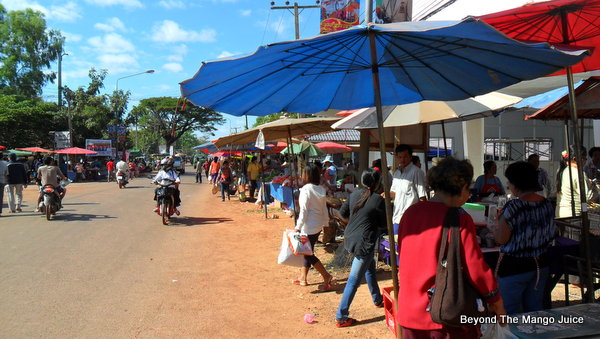 The Buddhist Day market attracts people from all over Sang Khom District. Samlors (a kind of tuk-tuk) continuously ferry people to and fro. The market has enough clothing, CD’s, bric-à-brac, crockery and Uri Geller style cutlery to fill a fleet of junk boats. The market is well-trodden and worth a wide-eyed peek for an hour or so.

Entertainment – All the Fun of the Fair

Entertainment in Sang Khom skates on wafer-thin ice, the town has neither Western nor Thai bars. And no hotels either. A couple of Thai suki open-air restaurants open in the evenings, but mosquito repellent is a must if you eat there. There is, however, one modest restaurant worth visiting.

Tantanoot (Tan-ta-noot) is a karaoke/restaurant on the outskirts of Sang Khom and the food there is decent fare, the singing generally bad to fair. The food is large-scale Thai, and the prices won’t crease let alone dent your budget. The restaurant does have three small bungalows for rent with daily fees around the 400 baht mark. 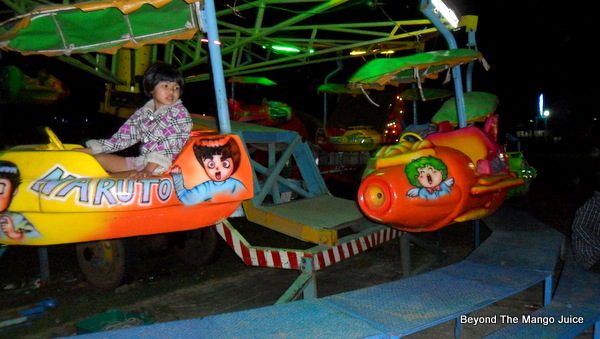 Most years between Christmas and New Year a travelling fair comes to Sang Khom. Fairground rides (at your own risk), side stall games (air rifle shooting, darts, hoops etc.) and lots of food vendors create a mix of fun and colour. There’s also live music and keenly contested traditional Thai Dancing competitions in the afternoon and evening. The fun-fair is usually a two-day event.

If you are visiting Sang Khom and have a weakness for western-style entertainment, then transport is a must. Ban Dung has a handful of good western bars and restaurants; Nong Khai has lots more. 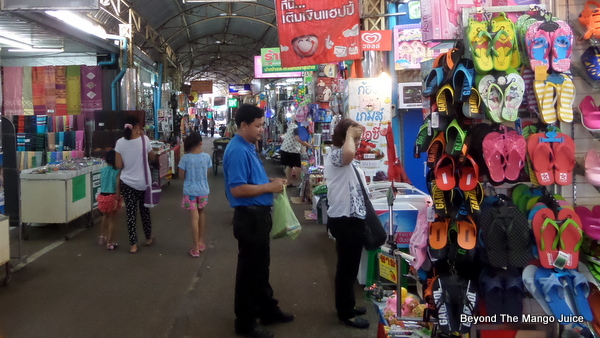 Tha Sadet Indo-China market (pictured above) in Nong Khai is worth exploring as is the city itself. Kamchanod Temple and Forest Reserve in Wang Thong District near Ban Dung, the putative entrance to the underground world of the mythical Phaya Nāga merits eyeball time as well.

Phon Phisai has a twice-weekly (Tuesday and Saturday) day market next to the Mekong River, and in October the town hosts its annual Nāga Festival. That’s a massive event and attracts thousands of visitors each year. Ban Chiang archaeological site (listed by UNESCO world heritage), is a long-winded 60 kilometres away and will appeal to some. Those apart, you need to travel further to experience and enjoy Thailand’s culture and day-trip sites.

Sang Khom District does attract the occasional western visitor, and I hope this post lays out some useful information to help make their stay in the area more comfortable and more enjoyable. Just don’t eat the horse.