My first sight of Wat Pa Huay Lad in Phu Rua, Loei Province, was impressive. The near-empty car park didn’t do justice to the view. The steep three-tiered pointed roof and hushed grandeur beneath it looked out-of-place in such a vast open space. Its magnificence muffled by the abandoned theatre below it. Surely such a beautiful thing should hold court to a plethora of admirers. An angelic presence domineering an impressive backdrop. 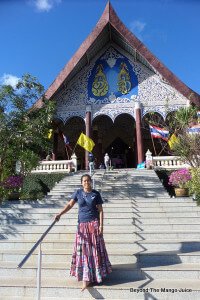 I’m not sure where they’d all come from, but there were enough people outside and inside Wat Pa Huay Lad to fill the small number of vehicles in the car park three times over. That was a mystery to me and one I never got close to solving. Not that I tried too hard.

As colour schemes go, the temple had payrolled an impressive painter and decorator. The temple’s colours offset the blue sky and small white puffs of cloud perfectly.

The number of steps leading to the temple was small-scale compared to Wat Phra That Doi Suthep in Chiang Mai. There’s 309 of those and around 50 at Wat Pa Huay Lad. That said, the view was impressive and the multi-tiered spiked roof and gable, eye-catching architecture. A great photo opportunity and one Wonderful Wi wasn’t going to miss. Click on the photograph to enlarge. 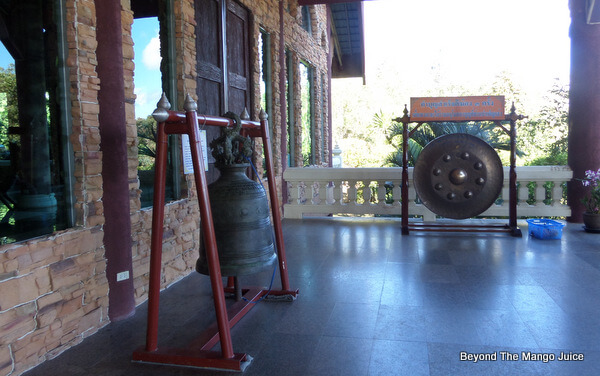 Bells, gongs and mallets. All singular in this case. You often see these at Thai Buddhist temples, but thus far I’ve never rung a bell or bashed a gong with a mallet. I’m horrified at the thought of damaging one. I’m not a Bible basher either. 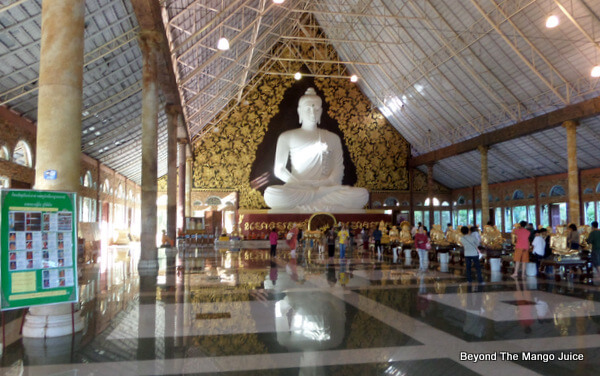 The white statue of Buddha. The figure is majestic and the central focus of the ordination hall. There are lots of smaller gold-leafed Buddha statues on display as well. The hall is much bigger than it looks from the outside, much more significant. 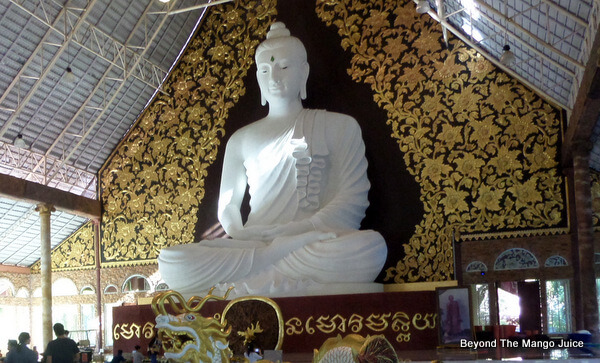 The white statue of Buddha was as impressive as it was tall. You can gauge its size by the height of people in the left-hand corner of the picture. 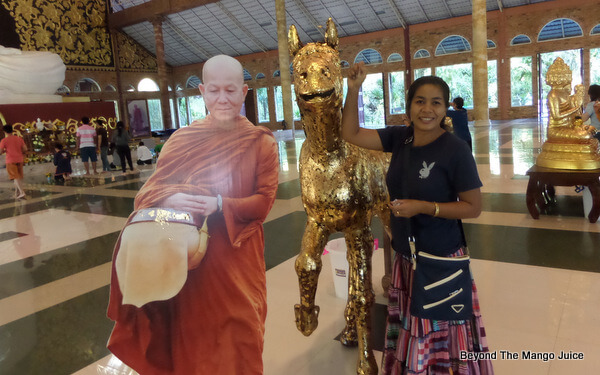 Wilai poses next to a gold-leafed horse behind a life-size image of a monk. I’m unsure who the monk is, but he may be Luang Pu Chob Thanasamo who (don’t quote me) made a pilgrimage to Phu Khrung near Ban Huay Lad and was invited to stay at the house of monks which later became Wat Pa Huay Lad. In Buddhism, the horse represents a symbol of energy and effort in the teachings and practice of the dharma. 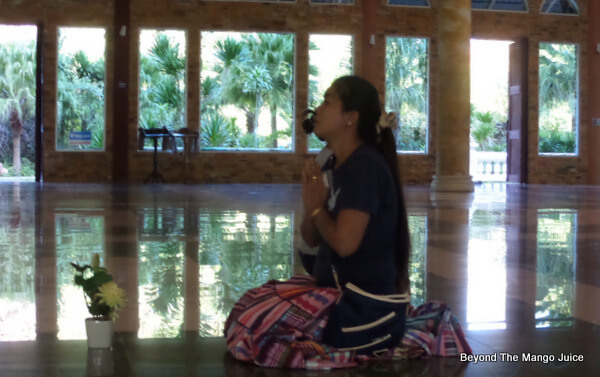 Wilai bought a potted flower and prayed for; I’m not sure what. Probably a safe journey to Phu Rua and back to our hotel. Me? I’d have settled for a fish and chip stall in the car park. There was plenty of room for one. 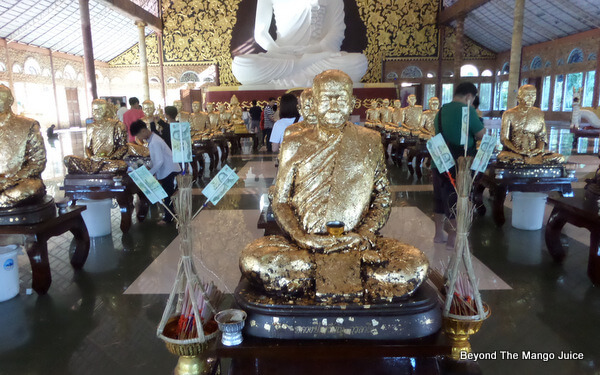 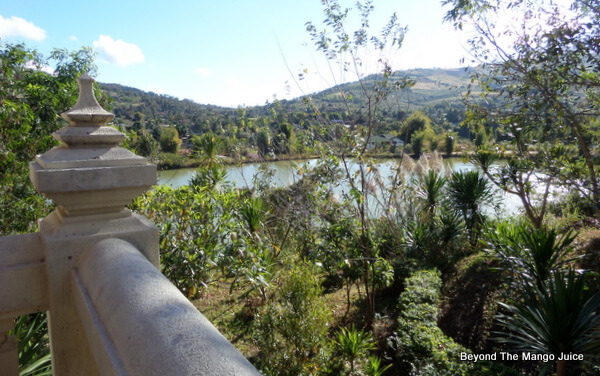 The view from outside was breathtaking too. Phu Rua is a mountainous region and the drive from Loei city takes in sprawling landscapes much like the one in the picture. The lake below was full of fish, and you could buy fish corn to feed them. Where were the potatoes?

Wat Pa Huay Lad is an interesting stop-off on the way to Phu Rua or Loei city. It’s certainly well worth spending an hour or two there and is a temple I recommend visiting if you are in Loei Province.