Thai and English Tinglish Conversation – Time Difference is a post I wrote way back in November 2012. It’s a popular one having received just short of 1,000 hits. Not a high enough figure to place it inside the top 100 popular posts on Beyond the Mango Juice but one that receives views most days. If you are not familiar with Tinglish conversation, below is an explanation of the hybrid language that I included in the said post.

‘I’d like to add a further idiosyncrasy of Tinglish which is the use of commonly known Thai words mixed in with English. It’s an extension of Sticky Wiki’s ‘addition of Thai final particles’ and is a Tinglish quirk Wonderful Wi and I use quite often.’

Thai phonetic wording is in bold type. Isaan English in italics. Try not to get confused. Read slowly because Tinglish conversation can produce the kind of word content capable of sending Google Translate’s language program into meltdown. 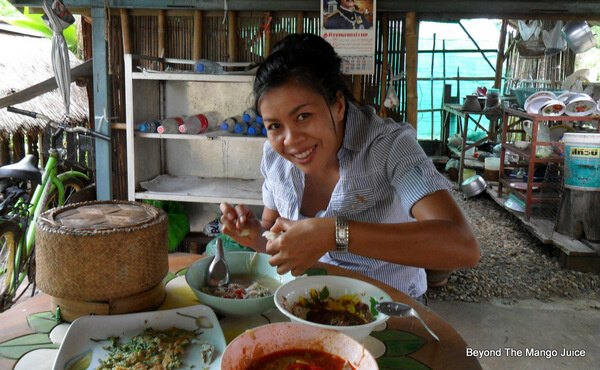 Our telephone conversation was dancing on the edge of sanity when all of a sudden Wilai unfurled the sails and headed into the crosswind. 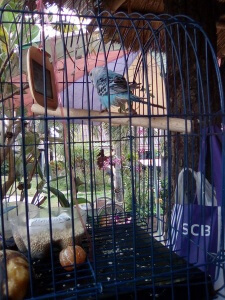 Two days later the picture of the talking bird flew into my Facebook account. It was a f**king budgie. I unfurled my sails and headed into the eye of the storm because Wi had included another photograph in the Facebook message and I needed to find out more about it. First point of conversation was the budgie.

Me: Wilai. The picture come. It’s a f**cking budgie. Can talk but not the same as a parrot.
Wi: Man no have pa-rot. Must whore-der (order). I whore-der pa-rot. Man telephone when bird come.
Me: Give your mobile to the budgie. I want to talk to it.
Wi: Naaah! Cannot talk yet. Maybe next week. Hus….band angry me?
Me: No not angry. I just know the budgie is never going to talk.
Wi: Mai bpen rai (whatever). Bird look nice. Wery (very) bootiful. 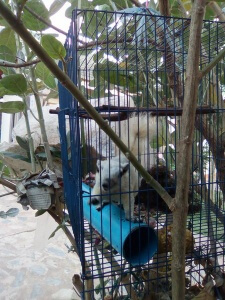 I steered our conversation toward the other picture which showed an animal in a similar size cage. I honestly didn’t know what it was because the animal’s white colouring had thrown me off scent. Despite our Tinglish language constraints I soon found out what type of animal it was.

Me: Wilai. What the hell is the white thing in the other picture?
Wi: Aaaah! I look dick-shun-hairy (dictionary) awn-ready (already). Is swirrel.
Me: Is what?
Wi: Swirrel. Like kin (eat) many nut many day.
Me: A f**king squirrel. You can’t keep a squirrel in a cage. A squirrel likes to go up trees and run around.
Wi: Naah! Maybe dog bite. Swirrel happy mark mark (very much) house she.
Me: Wilai. Think about letting the squirrel go. Buddha would like it if you let the animal go. 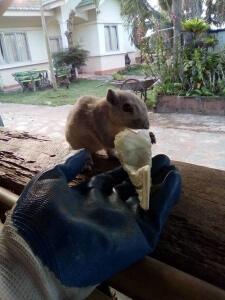 I got the surprise of my life when one week later I received another Facebook message from Wilai. It was out-of-the-blue because she hadn’t mentioned the message content during any of our previous daily phone conversations. The message contained another photograph.

She’d set the squirrel free. Opened the cage door and it had hurried away. To a coconut tree nearby. Amazingly, after an hour or so, the squirrel returned to its cage and has done likewise since then. Wilai is also able to hand feed the squirrel, albeit by gloved hand. Surprisingly too, our three dogs don’t seem too interested in harming it either. That’s on the premise the squirrel doesn’t get too close.

Two weeks on the squirrel is still happily skipping between trees and cage. In the evening Wilai locks her inside the cage for the night. Happy ending.

Have you had an English Tinglish conversation lately? If so I’d love to hear about some of its idiosyncratic word content. Over to you.