The Owl and the Mushroom Hat 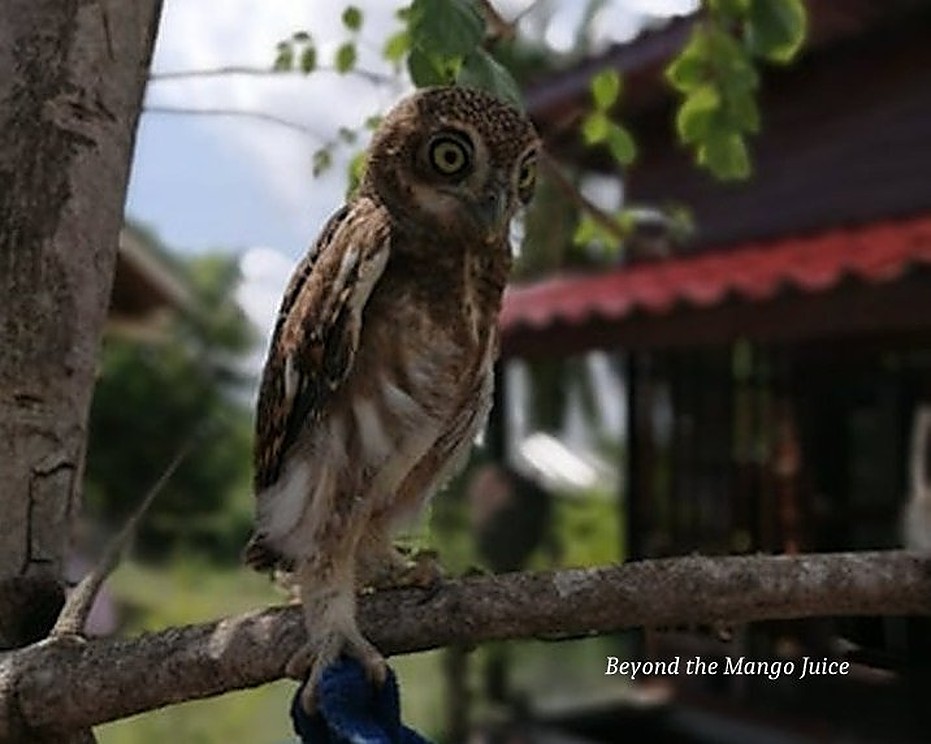 I have no recollection of ever seeing a Thai owl before. Perhaps I should have been more of a night owl myself. Nocturnal, mostly singular, binocular vision and a bird of prey. Doesn’t sound much like me.

A Thai Owl and a Facekini 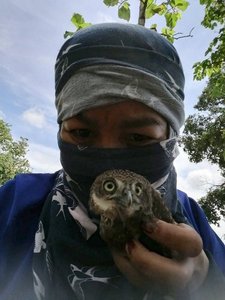 The rainy season is here and for Wilai that sometimes means an early morning trip to the woods and a hunt for mushrooms. A time to get out her boots, mushroom basket and top hat. Make the latter a rolled-up facekini. Add-on a face scarf to ward off mosquitoes and other woodland bugs.

All was well until a thud interrupted Wilai’s leisurely morning jolly. A young owl (owlet) had fallen from a nearby tree and didn’t move from where it had dropped.

The owlet’s two large eyes stared and followed Wilai’s every move. The bird’s mother was nowhere in sight and it was obvious the owl couldn’t fly. After a well given time, Wilai scooped up the owl and placed it inside her basket.

Our village house would be much safer than being alone in the woods. Operation Airborne had hatched. The plan was to keep the owlet safe until its inbred flight instincts ripened. Safe from predators and cooking pots.

Wilai returned to the village with Hoot the owl nestled on top of a meagre crop of mushrooms.

Hoot was kept safe and secure throughout the night and during the days encouraged to explore some of the garden trees. In-between, a flow of fish, insects and whatever helped build the owlet’s strength. Within days Hoot was taking short, tentative flights. Soon, Hoot would be ready to upgrade from domestic to long haul flights. On the fourth day, Hoot was gone and hasn’t been seen since.

Operation Airborne had ended successfully and hopefully, Hoot is back in the woods working the night shift.