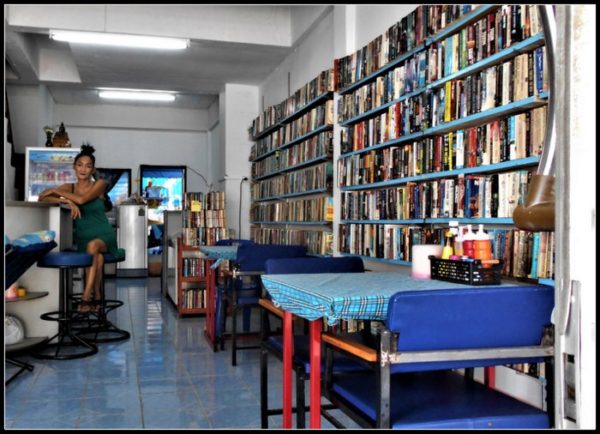 I retired during 2004 & subsequently found myself in Udon Thani to meet a member of the opposite sex, as one does. It was a pity that the individual was not all she was cracked up to be, possibly a little cracked as well, giving me the urge to instantly socially distance myself. Two meters appeared derisory if not inadequate, so I escaped to Bangkok. However, I very much liked Udon Thani & since it seemed to meet my needs, I returned early in November to settle & slowdown from my hectic previous life in London. This was pleasurable for a few months, but I became increasingly bored & needed something meaningful to occupy my days, night times were well catered for, if you know what I mean.

So, during 2005 I opened a small bar which I named Fuzzykens Garden Bar, where I was living, but being a little remote failed to produce sufficient customers, so it was time to look for pastures new. Opposite Justin’s Ozzy Bar in the old Soi Falang in Robinson’s car park, I discovered that a massage business was up for sale, which I subsequently purchased. My first task was promptly disposing of the mattresses, deck chairs & aromatic oils, which perhaps were not items one might expect in a bar, I then transformed the two corner units into something better suited to selling the amber nectar.

We were aware that the owners of Soi Falang, the Charoensri family, who owned the Charoensri Grand Royal Hotel & adjoining shopping center were considering selling out. Hence, we knew that our days were numbered. Turned out though, that we had two & a half years before we finally had to pack our bags & go, but go where? I had already discovered that BKK Grille, just across Prajak Road, was available & following negotiations with the owners of the business & the owner of the building, we moved into what became our home for nine years.

The owners of the building somewhat unexpectedly decided that they wanted it back for other uses, so we had to move again. I discovered that the shop just around the corner opposite the bus station was available & since we had little time, I considered it expedient to give it a try. However, & sadly, with ever-increasing traffic, related pollution & noise & not overlooking the smelly buses with black smoke belching out from inadequate exhaust systems adding unwanted flavour to our food & beer, it was time to move on—this time to 44/59 Soi Paradise where we remain to this day. Many of our customers prefer this place with its adequate parking, far less noise & lack of odious smells.

Like most businesses in challenging times, we have had to scale back & nowadays limit our menu to western fare & of course still sell & trade used books. When the pandemic is over & hopefully western tourists return to Thailand, it will be time to re-evaluate or maybe even re-invent ourselves, but that’s for the future. In the meantime, we’ll keep going as best we can & look forward to better times.

Hope to see you soon, Fuzzyken.